May 18, 1652 - Rhode Island passes the first law in the American colonies restricting slavery, making it illegal for more than ten years. The measure would be minimal, not only in its restrictions, but also in its tenure. However, the colony of Rhode Island, with this first law in the colonies that would place any restrictions on the use of slavery as an instrument of subjugating black men and women to servitude would suffice as the initial volley against the practice, and serve as an imcomplete salvo that would lead to restrictions in northern colonies, then states, in the future. For the south, they would have to wait much later, for any imposition against servitude against will, when the province of Georgia, under James Oglethorpe, would be founded under the notion of freedom, even if that, after Oglethorpe's departure, did not last.

The colony of Providence Plantation had been founded in 1636 by Roger Williams; one year later, the colony of Pocasset, on the island Aquidneck, known as Rhode Island, was founded by other Massachusetts Bay Colony outcasts William Coddington, John Clarke, and Anne and William Hutchinson. That would split in two within a year, Portsmouth (Pocasset) and Newport. Another mainland settlement, Shawomet Plantation, was established in 1642 by Samuel Gorton, known since 1648 as Warwick. In 1651, William Coddington obtained a separate charter, making him governor of the islands of Rhode Island associated with the Connecticut Colony and Massachusetts Bay Colony.

So what do those four settlements, i.e. colonies, have to do with the practice of slavery and the first restrictions in 1652? The importation of black slaves into New England had begun in 1638, at first in exchange for Native Americans captured in the Pequot War, then exchanged for slaves from the West Indies. These slaves were considered captured at war, and thus, legitimately held. This distinction was challenged in 1645, when the first ship of captured free black men from Africa arrived in New England, with the captain and crew chastized and arraigned for the practice and forced to return them to Africa. Those distictions and outrages about slavery did not last throughout New England for long.

However, questions about the morality of slavery were being debated within the Quaker faction of Rhode Island society, and there had also been a desire to differentiate itself from the rules of the Massachusetts Bay Colony. By 1652, this had risen to an act within two of the Rhode Island settements, Providence and Warwick, to limit slavery to ten years. It would apply to black and white slaves and indentured servants, but not Native Americans. Those settlements had not yet been involved in the slave trade. Newport did not participate; it was becoming a major slave trading port. The Rhode Island colonies had become a trading partner with the West Indies, food from New England for molasses, and slaves, which the New England colonies turned into rum, and labor.

Whereas, it is a common course practiced amongst English men to buy negers, to that end they have them for service or slave forever: let it be ordered, no blacke mankind or white being forced by covenant bond, or otherwise, to serve any man or his assighnes longer than ten years or until they come to bee twentie four years of age, if they be taken in under fourteen, from the time of their comings with the liberties of this Collonie.

What was the Outcome of the Act?

It was largely ignored. Providence and Warwick, close to Newport's port of slavery, could not enforce it, even if some in the community wanted to. Another act was passed by the Rhode Island legislature in 1659, banning the further import of African slaves. It went unenforced as well. Another law in Rhode Island, Providence and Warwick again, addressed the issue of Native American slaves in 1675, banning its practice. Ignored, too, with Roger Williams himself selling Native American captives in Metacom's War as slaves for thirty-two shillings or twelve bushels of corn per. By 1703, the Rhode Island General Assembly actually recognized the right of whites to own black and Native American slaves. At one point, sixty percent of vessels leaving British North American in the slave trade left from Rhode Island. Whereas there were only one hundred and seventy-five slaves in Rhode Island in 1680, by 1750, an estimated ten to eleven percent of the population of Rhode Island, over three thousand of the thirty-three thousand two hundred and twenty-six total, was constituted of slaves, double the average of other Northern states. There were over one thousand slaving voyages to the ports of Rhode Island in the 18th century.

Gradual emancipation of slaves in Rhode Island did not occur until 1784, when the general assembly passed An Act Authorizing the Manumission of Negroes, Mulattoes and others, and for the gradual Abolition of Slavery," on February 26, 1784. The trade was banned altogether by 1807. Only three hundred and eighty-four slaves would remain in Rhode Island by 1800 with a counting in 1840 showing only five. 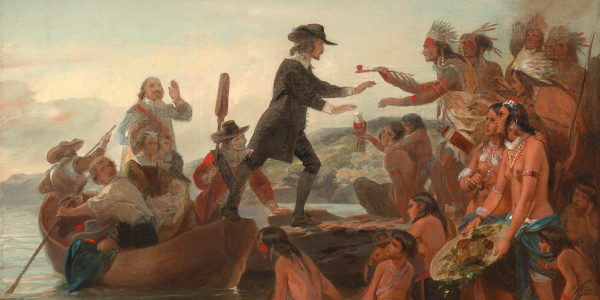