September 15, 1655 - Peach Tree War begins with attack on New Amsterdam and Pavonia along Hudson (North) River by Susquehannock Indians and their allies as retaliation for the loss of New Sweden to the Dutch. Indian victory forced many Dutch settlers back to Fort Amsterdam.

Yes, a war named after Peaches in a time when the world was trying to divy up the New World in the area from New England to Delaware, create relations with the tribes that inhabited a region, and figure out who owned what. So a Peach War ensued after New Sweden was incorporated into New Netherlands, which the Susquehannock Indians did not like. Well, if a Peach Orchard could play a large part in the Battle of Gettysburg, and a Pig War could ensue in the San Juan Islands of the Pacific Northwest, why not a Peach War in New York and New Jersey over land in New Jersey, Pennsylvania, and Delaware.

The Susquehannock tribe liked the colony of New Sweden, which had been founded by Peter Minuit in 1638 on the western bank of the Delaware River near Wilmington, Delaware. He, as dismissed director of the Dutch West India Company's New Netherlands Colony, understood the region and tribe. The Dutch and English had never been able to come to terms with the Susquehannock in their attempts to colonize the area; Minuit contacted the tribe and paid for the right to settle there. The Susquehannock did not like the Dutch because they liked their rivals the Iroquois and had recently lost their English trading partner in Maryland. Minuit and New Sweden, trading European goods for furs and pelts, became the Susquehannock's main trading partner and protectorate.

The English and Dutch did not recognize New Sweden, with the Dutch building a fort south of Wilmington in 1654, Fort Casimir, in an attempt to dislodge the colony. That did not work. New Sweden attacked Fort Casimir and expelled the Dutch, gaining a new fort they renamed Fort Trinity. The Susquehannock were happy. The Dutch were not. They attacked by ship between September 11-15, 1855 under the leadership of New Netherlands Director-General Peter Stuyvesant and siezed the colony of New Sweden. The Susquehannock would not stand for that.

Allied with local tribes Lenape and others (they were out of their territory), they attacked New Amsterdam, Lower Manhattan today, with six hundred warriors, racing through the undefended streets. They crossed the North (Hudson) River and attacked Pavonia (Jersey City), as well as New Netherlands settlements in Harlem, Staten Island, and the Bronx. One hundred and fifty hostages were taken to Paulus Hook, later ransomed and housed in New Amsterdam as many of the settlements in New Sweden territory were abandoned until rights for settlement were repurchased from the Indians by Stuyvesant and then fortified.

So why was it called the Peace Tree War? Was the war really over peaches? No. Well, kinda. An Indian girl named Tachiniki had, on September 15, taken a peach from the orchard of New Netherlands resident, Cornelis van Tienhoven (other sources state the name as Henry Van Dyke, although van Tienhoven seems more accurate as stated in Council documents of 1655). He killed her. As Stuyvesant and the New Netherlands soldiers were south taking back New Sweden, the Susquehannock and their allies took the opportunity to attack. The attack lasted for three days; it is estimated that one hundred Dutch settlers were killed. So the battle got its name from the Peach Tree, although the reason for the attack may or may not have had large reasoning with the girl or the peaches, but political implications against their rivals, the Dutch, and their allies, the Swedes.

At an 1655 Council, a document refers to the incident, "Whoever considers only his last transaction with the savages will find, that with clouded brains filled with liquor, (van Tienhoven) was the prime cause of this massacre ... he has laid the first foundation ... and given the most offense by killing one of the squaws for taking some peaches. If this is true, then we wonder (why) no more mention is made of it, and (why) he has not been brought to justice as a murderer ..."

History of the Susquehannock

The Susquehannock nation was located along the valleys of the Susquehanna River from the border of New York to the Chesapeake Bay. There were twenty tribes. They spoke a dialect of Iroquois, and were also known as the Conestoga. A large settlement was later situated near today's Conestoga, Pennsylvania. They were, despite speaking a similar language, enemies of the Iroquois. At the beginning of the 17th century, the population of the Susquehannock were estimated at five to seven thousand. Ten years after the Peach War, the Susquehannock fought battles against the Seneca and Cayuga nations over the best fur bearing streams needed to trade with the Europeans. However, ten years after that, in the mid-1670's, because of smallpox and other European maladies, the power of the Susquehannock was essentially over. By 1700, they numbered only three hundred in their original homeland of the Susquehanna Valley, although some had been driven into western Pennsylvania and later Ohio, merging with other tribes and became known as the Mingo. 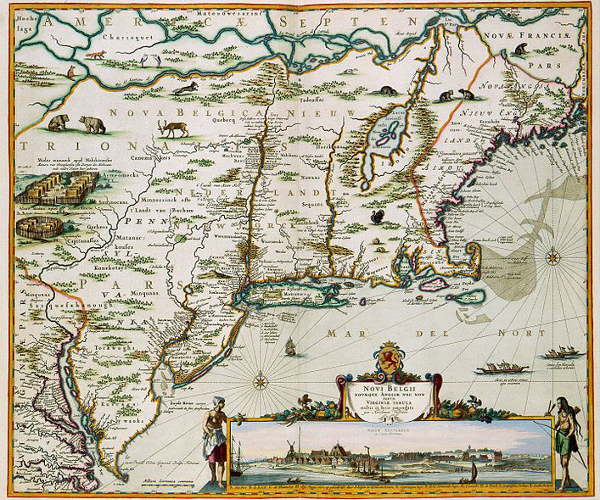