September 25, 1690 - The first newspaper issue in the United States publishes in Boston, the Public Occurrences. It was suppressed after its initial issue and the publication of a regular newspaper would not begin again until 1704. 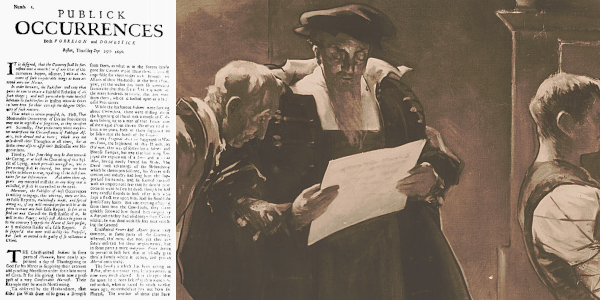 Was it actually the first newspaper published in the Americas? Technically, yes. There were several public broadsides, single sheet papers, issued the year before, but this, the Public Occurrences, published on September 25, 1690, was the first newspaper, a multiple sheet publication that takes that technical first. Mirriam Webster doesn't really distinguish between one page or two or four in its definition, "... a paper that is printed and distributed usually daily or weekly and that contains news, articles of opinion, features, and advertising ..," but, alas, the Public Occurrences is credited, by most, with being the initial newspaper, not broadside, although it had a rather short run. Try one issue.

The full names of the newspaper was the Publick Occurrences Both Forreign and Domestick, and that single issue had four pages, six by ten inches in size, although the fourth was not filled. It was the business of two men, American Richard Pierce, the printer, and British native Benjamin Harris, the editor and publisher. Harris had experience running a newspaper in London and now wished to ply that trade in the Dominion of New England, albeit that entity was in limbo during 1690 before it transitioned to the Province of Massachusetts Bay the next year under a new charter.

The newspaper text began with their reason for publication and mission statement about how they would proceed, then noted the first Thanksgiving. It relayed information about Indian attacks and the epidemics that were harming the colony.

"The Christianized Indians in some parts of Plimouth, have newly appointed a day of Thanksgiving to God for his Mercy in supplying their extreme and pinching Necessities under their late want of Corn, & for His giving them now a prospect of a very Comfortable Harvest. Their Example may be worth Mentioning," ... Public Occurrences, Issue 1.

Why was the newspaper stopped after one issue? An order from the Governor and Council, under the pen of Secretary Isaac Addington, was written four days after its initial publication, on September 29, 1690. There was the technicality that it published without a license, therefore without government approval, and the colonial government held a heavy hand over printing and the colonists adhering to the rules. It had also criticized the treatment of French prisoners captured by the Indian allies of the British, which the government did not like, although it is unknown whether that prompted the order to halt publication. ...

"In the mean time the English Colonies & Provinces in the West raised Forces, the Numbers whereof have been reported five or six hundred. The Honourable General Winthrop was in the Head of these, and advanced within a few miles of the Lake; He there had some good Number of Maqua's [Mohawks] to join his Forces, but contrary to his Expectation, it was found that the Canoes to have been ready for the Transportation of the Army over the Lake, were not prepared, and the other Nations of Indians, that should have come to this Campaign, sent their Excuses, pretending that the Small-pox was among them, and some other Trifles. The General, Meeting with such vexing disappointments, called a Council of War, wherein 'twas agreed, That it was impossible for them to Prosecute their Intended Expedition. However he dispatched away the Maqua's to the French Territories, who returned with some Success, having slain several of the French, and brought home several Prisoners, whom they used in a manner too barbarous for any English to approve. The General coming back to Albany there happened a misunderstanding, between him and the Lieutenant Governour of New-york which occasioned much discourse, but produced not those effects which were feared of it. Where lay the bottom of these miscarriages is variously conjectured, if any people further West than Albany, have been Tampering with the Indians, to desert the business of Canada, we hope time will discover it. And if Almighty God will have Canada to be subdu'd without the assistance of those miserable Savages, in whom we have too much confided, we shall be glad, that there will be no Sacrifice offered up to the Devil, upon this occasion; God alone will have all the Glory." ... Public Occurrences, Issue 1.

There were also rumors printed about French Royal family, which government authorities seemd to have thought uncalled for.

"France is in much trouble (and fear) not only with us but also with his Son, who has revolted against him lately, and has great reason,) if reports be true, that the Father used to lie with the Son's Wife. He has got all the Huguenots [French Protestants], and all the dissatisfied Papists [Roman Catholics], with the great force of the D[uke]. of Lorraine, and are now against him, resolving to depose him of his life and Kingdom," ... Public Occurences, Issue 1.

Freedom of the press was not the watchword for the British government of the Dominion. All remaining copies of the newspaper were destroyed. Today, there is only one surviving copy of the paper located in the Public Record Office of London.

Who Were Benjamin Harris and Richard Pierce?

Benjamin Harris was a recent immigrant, 1686, to the Americas from London. He had a publishing past, one that included trouble with the authorities for publishing pamphlets they thought seditious, anti-Catholic and against King James II, Duke of York. He was jailed twice for that. Once in Boston, Harris at first ran the London Coffee House, a location for reading foreign publications, and began publishing Tulley's Almanach and the New England Primer (circa 1690), the first reading primer for education in the colonies. It was a ninety page book that was an updated copy of the English Protestant Tutor for the Americas. This book remained a popular centerpiece in schools throughout the 18th century until Noah Webster wrote his Blue Backed Speller.

By 1690, with the variety of political news in England, including the royal regime change and the Glorious Revolution of 1688, Harris knew there was an appetite for news from home in Boston and began planning a monthly newspaper. Richard Pierce was the local printer, sometimes known as Richard Pearce, and very little is known about him prior to his publishing history in Boston. There is some thought among historians that he was the same Richard Pierce who had a printing office in London, but other historians think that is untrue. He opened up a printing office on Washington Street near Avery Street. His first publication was that of Increase Mather, "The Doctrine of Divine Providence, Opened and Aplyed," in 1684. Pierce printed thirty-five books by the time he was approached by Benjamin Harris about printing his newspaper; it is possible he was now the official printer of the colony.

After the Public Occurrences had been shuttered with one edition in the books, some historic notes claim that Benjamin Harris was jailed for his effort. We do not know if that was true. However, it was true that efforts to discourage the publication of newspapers continued over the next decade, with the first regular newspaper not appearing until April 24, 1704 when the News-Letter had its first edition, published by John Campbell, the postmaster, in Boston.

Whereas some have lately presumed to Print and Disperse a Pamphlet, Entitled, Publick Occurrences, both Forreign and Domestick: Boston, Thursday, Septemb. 25th, 1690. Without the least Privity and Countenace of Authority. The Governour and Council having had the perusal of said Pamphlet, and finding that therein contained Reflections of a very high nature: As also sundry doubtful and uncertain Reports, do hereby manifest and declare their high Resentment and Disallowance of said Pamphlet, and Order that the same be Suppressed and called in; strickly forbidden any person or persons for the future to Set forth any thing in Print without License first obtained from those that are or shall be appointed by the Government to grant the same. 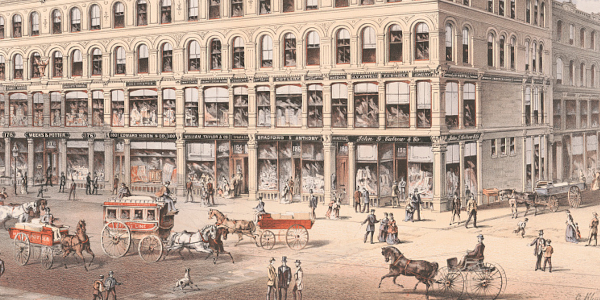