January 26, 1700 - The Cascadia earthquake, located off the coast of the Pacific Northwest along the Juan de Fuca plate, occurs. The magnitude 9 (8.7 to 9.2) quake caused a tsunami to hit the coast of Japan. 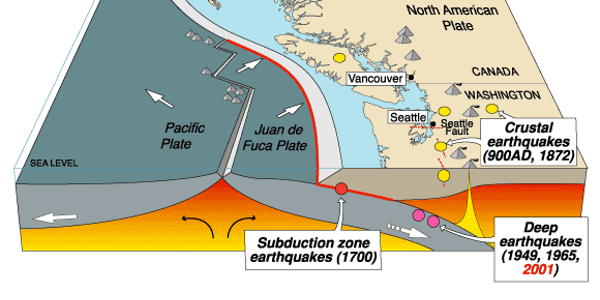 There were no written records. There are only stories from the local indegenous tribes about a great earthquake plus records of the Japanese tsunami that followed. It's estimated that the earthquake happened of 9:00 p.m. on January 26, at 45 degrees N latitude and 125 degrees W longitude. This would be in the Pacific Ocean just west of Lincoln City, Oregon today. Lincoln City is eight-nine miles southwest of Portland.

It was a megathrust earthquake with a magnitude of 8.7 to 9.2, caused by a shifting of the Juan de Fuca plate, which runs for six hundred miles from Northern California to British Columbia. It lasted for five minutes. So how do we know the earthquake happened? There are written records of the tsunami that hit Japan nine hours later (that's five hundred miles an hour to cross the Pacific Ocean in that time), with no other earthquake recorded then, plus tree rings in red cedar trees now underwater, twelve feet under when the coasts of northern California, Oregon, and Washington dropped twelve feet, which now show rings that grew for the last time in 1699. How amazing is that?

There are also the oral legends from the local tribes along the Pacific Northwest. The Huu-ay-aht First Nations village of Anacla, in Pachena Bay, one hundred and ninety miles northwest of Victoria, British Columbia, is one tribe that describes a struggle between a thunderbird and a whale, that shook the earth violently, causing the oceans to wash away their villages. The only community in Pachena Bay to survive the earthquake and tsunami was Masit, which sat seventy-five feet above sea level on the mountainside. Legends from the Macah, of Washington State, tell of a story about a night earthquake whose only survivors came before the tsunami hit. The Quileute of Washington state that the villagers who were in their canoes were swept inland to the Hood Canal, the dividing line between the Olympic Peninsula and Kitsap Peninsula.

In Japan, for years they did not know how the tsunami happened, never considering that the Pacific Northwest, in 1700 an unchartered land, could be the cause of an earthquake and the subsequent waves. They thought the unusual high sea was just a high tide. It had caused fires that took twenty buildings, evacuations, a shipwreck with two casualties, more than a dozen houses to wash away, and flooded fields. The port of Kuwagasaki, and the towns of Tsugaruishi, Otsuchi, Nakaminato, Miho, and Tanabe were affected. It was not until the 1980's that the pieces of the puzzle began to fit together.

In a 2005 report on the Cascdia earthquake, the USGS stated, "The 1700 Cascadia earthquake probably was such a giant. It likely broke at least 1,000 kilometers of the boundary between the subducting Juan de Fuca Plate and the overriding North America Plate, a rupture about as long as California, or about the length of Japan's main island, Honshu. On the seaward half of the rupture, the plates probably lurched past one another by about 20 meters. The magnitude was probably in the range M 8.7-9.2."

Past and Future Events

Previous earthquakes and tsunamis in the Cascadia Subduction Zone region with a magnitude of 8.0 or above occurred in 1310 AD, 810 AD, 400 AD, 170 BC, and 600 BC. It is estimated that one will occur about every five hundred years. Some geologists suggest that an 8.2 plus earthquake has a 37% chance of happening in the next fifty years, a 9.0 plus earthquake with a 10-15% chance in that same time frame. A tsunami caused by an earthquake of those levels could raise sea level from eighty to one hundred feet.