October 9, 1701 - An Act for Liberty to Erect a Collegiate School in Saybrook is passed by the Colony of Connecticut. It would become Yale University.

Colony founder Reverend John Davenport had imagined a college for the Colony of New Haven from the years around 1640, but never got the task accomplished. Sixty years later, a successor, Reverend James Pierpont persuaded his colleagues in the towns along the Connecticut shore that the college idea that Davenport proposed, should be secured. The legislature of the Colony agreed, passing an act in 1701. Ministers and Trustees were appointed and met at Saybrook with around forty books, and a college was born. It would be mastered by Reverend Abraham Pierson, a graduate of Harvard, and be known as the Collegiate School. At first, the college had one student taught at the home of the Master in Killingsworth (Clinton).

By 1707, they had their first building on a ten acre campus in Saybrook, donated by Nathaniel Lynde.

The first class of eighteen students would graduate in 1707. The college would not stay in Saybrook for long; its move to New Haven was secured by 1716 to the dismay of Saybrook residents. The first college building at New Haven, built in 1717-1718 near today's Bingham Hall, was named Yale after donor Elihu Yale, a representative of the British East India Company, and thus the Collegiate School itself took that nomanclature as Yale College. By 1887, its name was upgraded to Yale University.

Growth of the University

Although its history would encompass a conservative, almost Puritan agenda, compared to what some at the time called Harvard's liberal bent, Yale University today is a liberal arts college with fourteen constituent schools. Its endowment has reached $28.4 billion. This number is a far cry from the value of the goods that Elihu Yale donated, which was approximately 560 British pounds. By 2018, Yale had graduated five Presidents, nineteen Supreme Court Justices, twenty billionaires, as well as American heros such as Revolutionary War soldier Nathan Hale, a graduate in 1773.

Yale University expanded to include women in 1892 at its Graduate School of Arts and Sciences; its first female applicant, Lucinda Foote, had passed the entrance exams in 1793, but was refused entry. True coeducation did not occur until 1969. Today, there are over 12,000 students at Yale, including both graduate and undergraduate studies, with an academic staff of over four thousand, four hundred.

The oldest building on the New Haven campus is Connecticut Hall, built in 1750.

Full Text, Act for Liberty to Erect A Collegiate School

ACT FOR LIBERTY TO ERECT A COLLEGIATE SCHOOL, 1701

An act for Liberty to erect a Collegiate School: WHEREAS several well disposed, and Publick spirited Persons of their sincere Regard to & Zeal for upholding & Propagating of the Christian Protestant Religion by a succession of Learned & Orthodox men have expressed by Petition their earnest desires that fully Liberty and Priveledge be granted unto Certain Undertakers for the founding, suitably endowing & ordering a Collegiate School within his Majties Colony of Connecticot wherein Youth may be instructed in the Arts & Sciences who thorough the blessing of Almighty God may be fitted for Publick employment both in Church & Civil State.

To the intent therefore that all due incouragement by Given to such Pious Resolutions and that so necessary & Religious an undertakeing may be sett forward supported & well managed.

BE IT ENACTED BY THE Governr & Company of the sd Colony of Connecticot, in General Court now Assembled, And it is enacted & ordained by the Authority of the same that there be & hereby is full Liberty Right and Priveledge Granted unto the Reverend Mr James Noyes of Stonnington, Mr Israel Chauncey of Stratford, Mr Thomas Buckingham of Saybrook Mr Abraham Pierson of Kennelworth Mr Samuel Mather of Windsor Mr Samuel Andrew of Millford Mr Timothy Woodbridge of Hartford Mr James Pierpont of New Haven Mr Noadiah Russel of Middletown Mr Joseph Webb of Fairfield being Revrd Ministers of the Gospel & inhabitants within ye sd Colony Proposed to stand as Trustees Partners or Undertakers for the sd School to them and their successors, TO ERECT form direct, order establish improve and att all times in all suitable wayes for the future to Encourage the sd School in such convenient place or Places, & in such form & mannr & undr such order & Rules as to them shall seem meet & most conducive to the aforesd end thereof so as such Rules or Orders be not Repugnant to the Laws of the Civil Governmt as also to imploy the moneys or any other estate which shall be Granted by this Court or otherwise Contributed to that use according to their discretion for the benefit of the sd Collegiate School from time to time & att all times henceforward.

And be it further ENACTED by the Authority aforesd that the before named Trustees Partners or undertakers together with such others as they shall associate to themselves (not exceeding the number of Eleven, or att any time being less than Seven), Provided also that Persons nominated or associated from time to time to fill up sd number be ministrn of the gospel inhabiting within this Colony & above the Age of forty years ) or the major Part of them the sd Mr James Noyes, Israel Chauncey, Thomas Buckingham, Abraham Pierson, Samuel Mather, Samuel Andrew, Timothy Woodbridge, James Pierpont Noadiah Russel, & Joseph Webb undertakers & of such Persons so chosen & associated as abovesd att any time hereafter, HAVE and Shall have henceforward the oversight full & compleat right Liberty power & Priveledge to furnish direct manage order improve & encourage from time to time & in all times hereaftr the sd Collegiate School so Erected & formed by them in such ways orders & mannr & by such Persons Rector or Master and officers appointed by them as shall according to their best discretion be most conducible to attaine the aforesd mentioned end thereof.

And Moreover it is ENACTED & ordered by the Governr Council & Representatives of ye Colony aforesd met in General Assembly That the sd Mr James Noyes, Israel Chauncey, Thomas Buckingham, Abraham Pierson, Samuel Mather, Samuel Andrew, Timothy Woodbridge, James Pierpont, Noadiah Russel & Joseph Webb, Undertakers Trustees or Partners & ye sd Persons taken from time to time into Partnership, or associated as aforesd with themselves, Shall Have & receive & is hereby GIVEN & GRANTED unto them, the full & just sum of one hundred & twenty pounds in Country Pay to be paid Annually & att all times hereafter until this Court order otherwise TO them & to such Person or Persons only as they shall appoint & impower to Receiv the same to be faithfully disposed of by ye sd Trustees Partners or Undrtakers for the end aforesd according to their discretion which sd sum shall be raised & Paid in such ways & mannrs & att such a value as ye Country Rates of sd Colony are & have been usually raised & Paid:

It is also further ENACTED by the Authority aforesd that the sd undertakers & Partners & their successrs be & hereby are further impowered to have accept acquire purchase or otherwise lawfully enter upon Any Lands Tenements & Hereditamts to the use of the sd School not exceeding the value of five hundred Pounds pr Ann, & any Goods Chattels sum or sums of money whatsoever as have heretofore already been Granted bestowed bequeathed or Given or as from time to time shall be freely Given bequeathed devised or settled by any Person or Persons whatsoever upon & to & for the use of ye sd School towards the founding erecting or endowing the same & to sue for Recover & receiv all such Gifts Legacies bequests annuities Rents issues & profits arising therefrom & to imploy the same accordingly & out of ye estate Revenues Rents profits incoms accrueing & belonging to sd School to support & pay as the sd Undertakers shall agree & see cause the sd Rector or Master Tutors Ushers or other officers their Respective annual Salaries or Allowances. As also for the encouragemt of the Students to grant degrees or Licences as they or those deputed by them shall see cause to order & appoint. 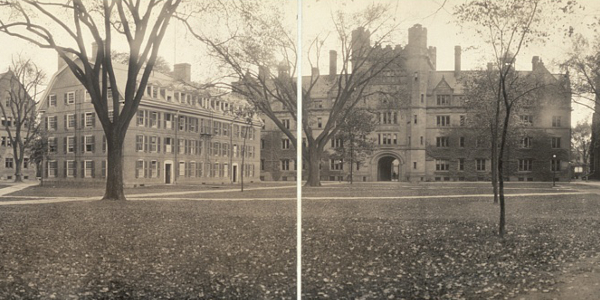