February 29, 1704 - During Queen Anne's War, Deerfield, Massachusetts is attacked by French and Indian forces with fifty-six killed and over one hundred captured and carried off. 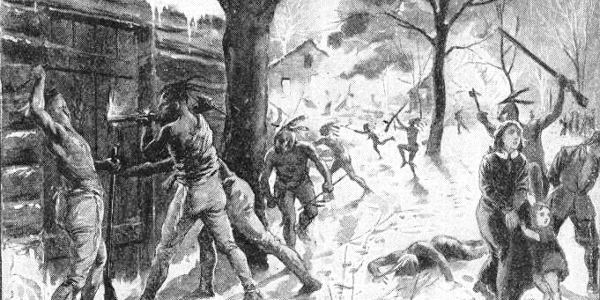 What had started out as tension between the participants in Europe's War of Spanish Succession in 1701 had expanded to the colonies quickly. The Siege of St. Augustine between New Spain and the English in 1702 had led to conflict up and down the Eastern seaboard of North America from Florida to Canada. French Canadians under Michel Leneuf de la Valli&eacutere de Beaubassin had been attacking English settlements in the northeast from Wells to Falmouth (today's Maine) with their allies in the Wabanaki Confederacy from 1703. More than three hundred settlers had been killed. As the beginning of 1704 approached, the settlements of New England were in constant danger.

On February 29, Jean-Baptiste Hertel de Rouville, a French military commander, approached the frontier town of Deerfield. Deerfield had been established after hazy land grants from the Pocumtuc tribe, who had subsequently been partially destroyed by the Mohawk. It was a farming community along the Connectucut River on the western edge of English settlement, isolated from the rest of the Massachusetts Bay Colony. It had seen war before, raided in 1675 during King Philip's War, evacuated, then reoccupied. They had refortified their palisade in 1703 upon news of the other attacks, and Joseph Dudley had sent twenty men of the Massachusetts Bay Colony militia to assist by February 24, 1704. There were seventy additional men of fighting age in Deerfield under Captain Jonathan Wells.

On February 28, 1704, Jean-Baptiste Hertel de Rouville established a camp two miles from Deerfield. His men included an experienced troop of fifty French Canadian soldiers, plus two hundred and fifty Abenaki, Caughnawaga, and Mohawk (Iroquois) allies. The town was cognizant that a raid might come and all residents were inside the palisade that night with guard on duty, but snow that drifted to its top. On the morning of September 29, the first attackers used the drifts to gain entry, then opened the gate from inside. They went from house to house, killing some of those they encountered, forty-nine of the two hundred and ninety-one within the palisade at the start of the fight. Puritan minister John Williams and some in his family were part of those captured; others in his family were killed.

The residents and militia of Deerfield attempted a defense and reinforcements from the nearby town of Hadley were summoned by John Sheldon, who had escaped. They forced the attackers to flee, but not until one hundred and twelve had been made prisoner, and the Hadley reinforcements had lost seven men. Over the next weeks, the prisoners were marched three hundred miles to a Caughnawaga mission village near Montreal. Their fate varied. Some of the prisoners perished on the march or during their captivity, including John Williams' wife; eighty-nine made it to Montreal. The children who survived were predominantly adopted by the Mohawk. Reverend Williams and some others were released in prisoner exchanges after a long captivity, but that did not include one of his daughters, Eunice, who remained in Mohawk captivity, marrying into the tribe.

Seventeen of the forty-one homes in Deerfield were destroyed; one hundred and twenty-six of the residents and militia had survived the attack.

In May, Benjamin Church and five hundred soldiers and Indian allies of the Massachusetts Bay Colony made a raid into French territory in retaliation to the Deerfield raid. They engaged the enemy in various battles, including the battle against Grand-Pré, Acada, Nova Scotia in June. Part of the reason for the attacks was to gain prisoners to exchange for the Deerfield prisoners now in Montreal.

Excerpt from John Williams Account of the Deerfield Raid

On Tuesday, the 29th of February, 1703-4, not long before break of day, the enemy came in like a flood upon us; our watch being unfaithful; - an evil, the awful effects of which, in the surprisal of our fort, should bespeak all watchmen to avoid, as they would not bring the charge of blood upon themselves. They came to my house in the beginning of the onset, and by their violent endeavors to break open doors and windows, with axes and hatchets, awaked me out of sleep; on which I leaped out of bed, and, running to wards the door, perceived the enemy making their en trance into the house. I called to awaken two soldiers in the chamber, and returning toward my bedside for my arms, the enemy immediately broke into the room, I judge to the number of twenty, with painted faces, and hideous acclamations. I reached up my hands to the bed - tester for my pistol, uttering a short petition to God, for everlasting mercies for me and mine, on account of the merits of our glorified Redeemer; expecting a present passage through the valley of the shadow of death; saying in myself, as Isa. xxxviii. 10, 11, "I said, in the cutting off of my days, I shall go to the gates of the grave: I am deprived of the residue of my years. I said, I shall not see the Lord, even the Lord, in the land of the living: I shall behold man no more with the inhabitants of the world." Taking down my pistol, I cocked it, and put it to the breast of the first Indian that came up; but my pistol missing fire, I was seized by three Indians, who disarmed me, and bound me naked, as I was in my shirt, and so I stood for near the space of an hour. Binding me, they told me they would carry me to Quebeck. My pistol missing fire was an occasion of my life's being preserved; since which I have also found it profitable to be crossed in my own will. The judgment of God did not long slumber against one of the three which took me, who was a captain, for by sunrising he received a mortal shot from my next neighbor's house; who opposed so great a number of French and Indians as three hundred, and yet were no more than seven men in an ungarrisoned house.

Excerpt from John Williams Account of the Deerfield Raid, Continued

I cannot relate the distressing care I had for my dear wife, who had lain in but a few weeks before; and for my poor children, family, and Christian neighbors. The enemy fell to rifling the house, and entered in great numbers into every room. I begged of God to remember mercy in the midst of judgment; that he would so far restrain their wrath, as to prevent their murdering of us; that we might have grace to glorify his name, whether in life or death; and, as I was able, committed our state to God. The enemies who entered the house, were all of them Indians and Macquas, insulted over me awhile, holding up hatchets over my head, threatening to burn all I had; but yet God, beyond expectation, made us in a great measure to be pitied; for though some were so cruel and barbarous as to take and carry to the door two of my children and murder them, as also a negro woman; yet they gave me liberty to put on my clothes, keeping me bound with a cord on one arm, till I put on my clothes to the other; and then changing my cord, they let me dress myself, and then pinioned me again. Gave liberty to my dear wife to dress herself and our remaining children." John Williams. 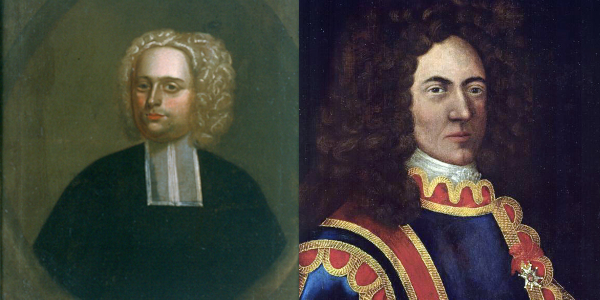