September 22, 1711 - The Tuscarora War begins in North Carolina between tribe of the Southern Tuscarora and their allies against the English and German colonists. For the most part, there had been peace between the Tuscarora tribe and the colonists since the first settlers arrived in the area of North Carolina in 1653. That was unusual for the colonies of Virginia and New England, but had been the case in the Carolinas for fifty years. Unfortunately, it was about to change. The Tuscarora had seen the benefit of the settlements through increased trade in the years prior, gaining weapons and other articles from the English, Dutch, and German colonists who arrived. But as time and additional colonists grew, their plantations began to encroach upon their traditional hunting territory and split the Tuscarora into two groups, the more prosperous North, led by Tom Blount in the lands near the Roanoke River, and less so South, headed by Chief Hancock in an area south of the Pamlico. This was particulary true of the settlement of New Bern, near Southern Tuscarora territory, by John Lawson.

Lawson had accompanied an expedition to the interior of Carolina in December of 1700, exploring the Santee River and Pamlico River, then settling along the later. Over the next five years, he worked as a surveyor, founded the town of Bath, and eventually became the surveyor-general of the entire colony in 1708. In 1709, Lawson returned to London, publishing a book, "A New Voyage to Carolina," which touted the area.

Having spent most of my Time, during my eight Years Abode in Carolina, in travelling; I not only survey'd the Sea-Coast and those Parts which are already inhabited by the Christians, but likewise view'd a spatious Tract of Land, lying betwixt the Inhabitants and the Ledges of Mountains, from whence our noblest Rivers have their Rise, running towards the Ocean, where they water as pleasant a Country as any in Europe; the Discovery of which being never yet made publick, I have, in the following Sheets, given you a faithful Account thereof, wherein I have laid down every thing with Impartiality, and Truth, which is indeed, the Duty of every Author, and preferable to a smooth Stile, accompany'd with Falsities and Hyperboles.

Great Part of this pleasant and healthful Country is inhabited by none but Savages, who covet a Christian Neighbourhood, for the Advantage of Trade, and enjoy all the Comforts of Life free from Care and Want.

But not to amuse my Readers any longer with the Encomium of Carolina, I refer 'em to my Journal, and other more particular Description of that Country and its Inhabitants, which they will find after the Natural History thereof, in which I have been very exact, and for Method's sake, rang'd each Species under its distinct and proper Head.

The book fostered increased immigration to the Carolina colony, including a group of Germans from Palatinate, whom Lawson returned from London with in 1710 to found the town of New Bern on the Neuse River. And thus, we had it, the encroachment on Tuscarora lands, which particularly infuriated Chief Hancock of the Southern Tuscarora. They, along with allies in the Pamplico, Cothechney, Coree, Mattamuskeet, and Machupunga began to attack homesteads. On September 22, 1711, while John Lawson and associate Christopher von Graffenried traveled up the Neuse River, looking for an easy route to Virginia, they were captured by the Southern Tuscarora and taken to Catechna, the home of King Hancock on Contentea Creek. Both men were questioned the first day with a decision to free them on the second. On the second day, Lawson was questioned again, getting into an argument, which von Graffenried was not involved in. Lawson was then tortured and killed; von Graffenried, who promised them presents, was given assurances that he would be freed. He was to remain with them until after they had completed their war on the colonists of North Carolina.

The next day, September 23, King Hancock and his allies, five hundred strong, raced down the Neuse and Pamlico rivers to the plantation settlements, killing one hundred and thirty over three days, capturing others to return with them to Catechna.

The Colonies of Carolina Respond

The governor of the colony of North Carolina, Edward Hyde, immediately asked the legislature to enact a draft of all men from 16 to 60. It was not enough; the colony had little ammunition and food, plus the Quakers refused to fight. He asked Virginia for help; they wanted land in exchange, which he thought blackmail and refused. Virginia did appropriate funds and send troops to the border to prevent other Indian allies from joining Chief Hancock.

They considered asking for aid from the Northern Tuscarora, but did not trust them. The Northern Tuscarora had not participated in the raids. Hyde asked the Colony of South Carolina for aid; they agreed, sending Colonel John Barnwell with thirty soldiers and five hundred Warrior allies from the Wateree, Congaree, Waxhaw, Pee Dee, Appalachee, and Yamasee. It took until January of 1712 for the force to arrive. Barnwell attacked the Tuscarora town of Narhante, defeating it, then was joined by sixty-seven North Carolina militiamen as they continued their pursuit of the Southern Tuscarora.

On March 5, Barnwell and his troops attacked Hancock's Fort, the conflict ending in a truce due to the torture of the white prisoners inside whom he accepted in an exchange for ceasing the fight. When the Tuscarora reneged on a second exchange of prisoners in the weeks ahead, Barnwell built Fort Barnwell on the Neuse River near an abandoned Indian village to use as a base for future attacks. On April 7, Barnwell began to siege Fort Hancock; on April 17, he again agreed to a conditional surrender of the one hundred and twenty eight warriors who defended it.

The peace that Barnwell negotiated did not please Governor Hyde, who had wanted victory. It did not please the Tuscarora either that some of his South Carolina officers had taken some of their warriors to sell as slaves. They began to attack Carolina settlements again during the summer. New governor Thomas Pollack asked South Carolina for assistance a second time. This time they sent Colonel James Moore with thirty-three officers and one thousand Native fighters. He arrived in December 1712, with his force gaining strong victories, culminating in the March 1 to March 22, 1713 battle for the Tuscarora Fort Nooheroka, where nine hundred and fifty Indians were killed or captured. Meanwhile, the Northern Tuscarora under Chief Tom Blount had been induced by the settlers with the idea of gaining control of the entire tribe; they captured King Hancock, handing him over to the English, who killed him.

A treaty to finalize the end of the war was signed in 1715, and in the years after the conflict, many of the tribe emigrated to New York, joining the Five Nations of the Iroquois as the Sixth Nation.

Select Text, Graffenried's account of the founding of New Bern

"Had Graffenried been alone it would have been better for him on this exploring expedition, for the Indians knew he had never done them any harm, but they disliked Lawson because of his having cheated them. At first the Indians were disposed to let both of them go when they found who they were. But at a second examination, Lawson could not refrain from quarreling with one of his captors, and this destroyed all possibility of a release. The Indians in anger prepared to execute both men. Bound hand and foot, the victims sat on the ground and watched the preparations, not the least frightful of which was the great heap of burning wood. Graffenried, however, managed to speak to one of the Indians who understood a little English, explained his innocence and also threatened them with the Queen's displeasure and the vengeance she would take if they harmed him, but his arguments did not seem to have much effect at first; so in expectation of immediate torture and death he fortified himself and his negro slave with prayer and exhortation and found peace of mind in these exercises. About three or four o'clock in the morning he was unbound and led away, as he supposed, to his death, but the Indian signified to him that his life was to be spared and only Lawson would have to die, and so it proved. Just what the manner of his death was Graffenried never learned, for the Indians steadfastly refused to divulge it; but he had heard them threaten to cut Lawson's throat with a razor. Yet while Graffenried's life was spared, they did not let him go home immediately, but kept him a prisoner for six weeks." 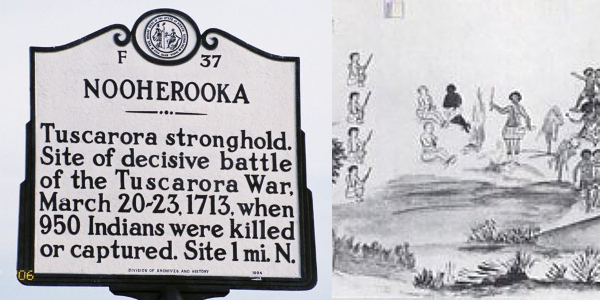