July 31, 1715 - Eleven ships of the Spanish treasure fleet sinks off the coast of Florida near Vero Beach on its journey back to Spain filled with the riches of the New World. 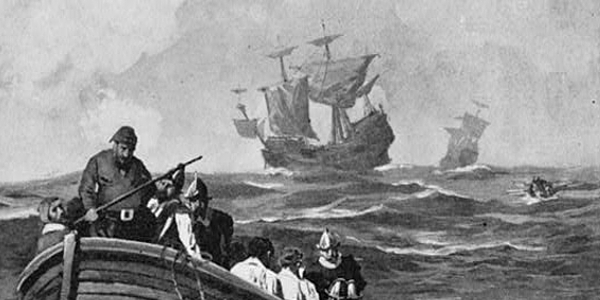 They had left Havana with eleven ships filled with the treasure of the Caribbean, South America, and Mexico, under the command of Juan Esteban de Ubilla and Antonio de Echeverez. Ubilla had arrived in the New World, Veracruz, the Mexican port city, with eight ships, including the Urca de Lima, in December 1712, part of the Flota de Nueva Espana, serving the trade of the Mexico and Manila Galleons. His mission? To gather the goods of treasure that Mexico and the islands had, plus bullion, the gold, silver, and other metals of the region. The crown need money after the expenses of two wars in the past decades had drained the treasury. Due to politics and logistics, the excursion back was delayed. Finally, in May of 1715, four of the ships, the Nuestra Señora de la Regla (Capitana), Almiranta, San Cristobal de La Habana, Santisima Trinidad, and the Urca de Lima sailed for Havana before making the voyage across the Atlantic.

On July 24, 1715, those five ships, plus six ships of Spain (the Capitán de Mar y Tierra, Nuestra Señora de la Concepción, Señor San Miguel, the El Ciervo, and a smaller patache merchant vessel), commanded by Echeverez, the fleet of the Escuadrón de Tierra Firme out of the Cartegena that served the South American trade, plus one French warship of the 4th class, the El Griffon, captained by Captain Antoine d'Aire and retrieve money owed to France, that would assist in protecting the fleet from pirates, sailed for Europe with two thousand five hundred men and their valuable cargo. In the end, they would not have to worry about the pirates, but, it was understandable as the cargo included a significant amount of gold bullion, fourteen million pesos of silver, and other goods from East Africa and the Americas.

With the French ship sailing ahead searching for pirates, a hurricane approached the trailing vessels from the southeast after five days of smooth sailing. It is estimated that the winds were approaching one hundred miles per hour, and by July 30, had changed course, due west. Orders were given to steer directly into the wind, but that had marginl impact. The flotilla was driven toward the coast of Florida, near Fort Pierce inlet, where the Urca de Lima, grounded, its crew and cargo more intact than most of the others, all of which sank at sea, crashed into the reef. It was 4 a.m. on July 31. Over one thousand men would perish, including commanders Ubilla and Echeverez. Most of the cargo was lost in the ocean. The cargo of the Urca de Lima did not include much of the silver and gold, only a few chests of private silver, but did stow cowhides, chocolate, sassafras, incense and vanilla.

Once ashore, the remaining sailors were organized by Admiral Francisco Salmon, and a recovery expedition for the treasure and men launched. On August 6, Salmon sent a small boat that survived with Ubilla's pilot, Nicolas de India, and eighteen men to head for Havana. The voyage would take eleven days. There are some reports that another boat was sent to St. Augustine to tell the authorities there of the loss of the fleet. Relief ships from Havana arrived at the site of the wrecks in August and recovery operations continued under Salmon. The items recoverd included five million pieces of eight. With no protection, pirates Henry Jennings and Charles Vane learned of the location of the ships after capturing a Spanish mail ship. They overtook the men of the recovery effort in January 1716 and stole L87,500 of the gold and silver from the camp. The Spanish salvage camp continued into 1718 when it was abandoned.

The French ship had headed northeast into the storm, and arrived in the town of Brest on the Brittany coast on August 31, 1715, unaware that the Spanish treasure fleet had been shipwrecked.

Discovery of the Shipwreck

Two centuries would pass before the shipwreck was again discovered. William J. Beach, in 1928, the coastline and river inlet of Fort Pierce altered significantly, found the remnants of the Urca de Lima. Salvage operations began in 1932; other attempts were made in 1983 and 1984. A bar of silver buillion, several cannon, and two silver wedges were found during those searches. The wreck in now a site, an underwater preserve, listed on the National Register of Historic Places.

After those initial new findings discovered little of value, on July 31, 2015, Brent Brisbon and his firm, the Queens Jewels, LLC, found $4.5 million in gold coins off the Florida coast, which were remnants of the 1715 Spanish Treasure Fleet. Included in the find were nine "Royals," designed for King Philip V of Spain. There are only thirty "Royals" in existence. They are worth $300,000 a piece. Twenty percent of the find will belong to the state of Florida for display in a Tallahassee museum. It was estimated in 2015 that as much as $400 million worth of treasure still exists on the ocean floor from the 1715 shipwrecks.

Image above: Example of a Spanish ship (Juan d'Anasco in Bay of Apalache) in the drawing named "The Caravels Have Arrived," 1898, George Gibbs. Courtesy Library of Congress. Image Below: Example of the Rare 8 Escudos Lima 1710, part of the treasure uncovered from the shipwreck of the Spanish fleet, 2008, Augi Garcia. Courtesy Wikipedia Commons. Info Source: 1715fleetsociety.com/history; "$4.5 million of gold recovered from 300-year-old shipwreck in Florida," 2015, Jessica Eggert, mashable.com; WPBF News; Wikipedia Commons. 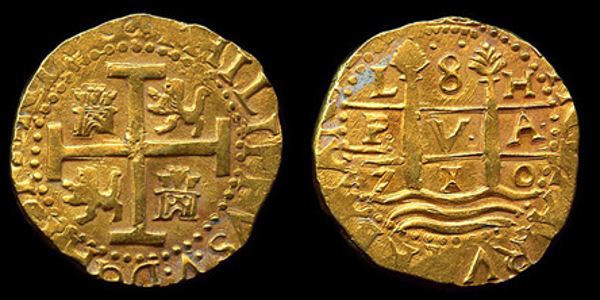