November 19, 1716 - The first theater in the colonies to open for business in Williamsburg, Virginia, when contract is signed to build theater.

His name was William Levingston, the first proprietor, in business with his indentured servants for the purpose of acting since September 1715, Charles and Mary Stagg. They made an agreement to construct and hold plays within the town of Williamsburg, at what would be termed the Play Booth Theater. The agreement went like this ...

"to cause to be erected & built at his own proper Costs and Charge in ye City of Wmsburgh one good substentiall House commodious for acting such Plays as shall be thought fitt to be acted there."

The Staggs agreed to be obligated to both perform and teach the craft there; they had changed their indenture contract in July to be more of a partnership after Levingston had used a room at William and Mary College since March of 1716 to establish a dance company there until his theater could be constructed. The Levingston-Stagg Company likely performed during 1716 and 1717, whether at the college or the new theater. It's unknown when the first play was performed at the theater. Some contend the first known performance did not occur until 1718. That play, in honor of King George I's birthday, was sponsored by the Governor, Alexander Spotswood. The structure on Palace Green was two stories tall, thirty fee wide, and sixty-five feet deep, and on a lot Levingston purchased totaling three and one half acres, where he also constructed a house, stable, and kitchen.

Levingston would run the theater business at the playhouse until 1723 when he defaulted on the mortgage. He also ran a tavern, ordinary, and bowling green from 1716-1723 on the same property. There are reports that the playhouse was used for performances until 1727, although likely not by Levingston during those years. The original playhouse was demolished in 1745 after the Courthouse on Market Square was built. A second playhouse was built in Williamsburg in 1752.

Theater in the colonies at that time was a long affair. A typical performance took three to five hours. There would be opening music, a prologue, main piece, and epilogue. There might also be a one or two act afterpiece. Music was performed during the intermissions.

By 1716, Williamsburg had been around for eight-four years, built at the Middle Plantation between the York and James River, a fortified settlement that had served as the capitol of the Colony of Virginia since 1699, after stints as capitol after the burning of the statehouse, several times, in Jamestown. It included, since 1693, the College of William and Mary, established by letters patent by King William III and Queen Mary II. It was the second oldest institution of higher learning in the America's, after Harvard.

The Middle Plantation had been established within the territory of the Powhatan Confederacy, and peace was not established with the tribes in the region until 1677. During the first years of the 18th century, after its official designation as capitol, the city, now officially known as Williamsburg, underwent a significant transformation. Ravines were filled in, homes demolished, and the central road renamed for the Duke of Gloucester. Six years after the agreement to build the first theater in 1716, Williamsburg would become a royal charter city, the oldest such designation within the United States.

There had to be some type of theater performance in the colonies prior to 1716. Are there any known? Yes, in Accomac County, Virginia, there is notice of a performance in August 1665. It was called "The Bare and the Cubb." The theater in Williamsburg is considered the first permanent performance venue. 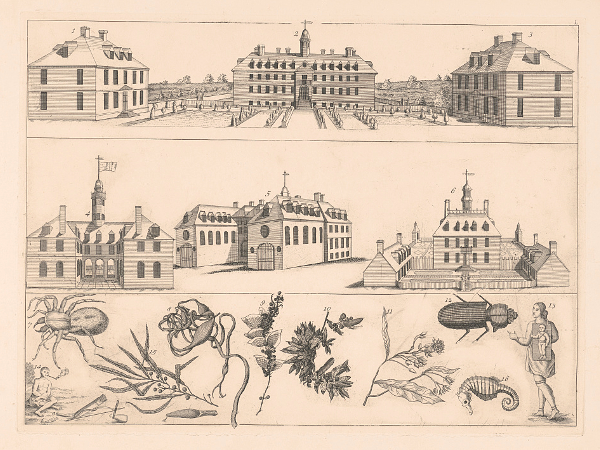