June 16, 1720 - The Villasur expedition of Spanish troops leaves Mexico on a mission to control the increasing presence of the French in the Great Plains. It would end with a defeat by the Pawnee on August 14 near the Loup and Platte Rivers, near Columbus, Nebraska. 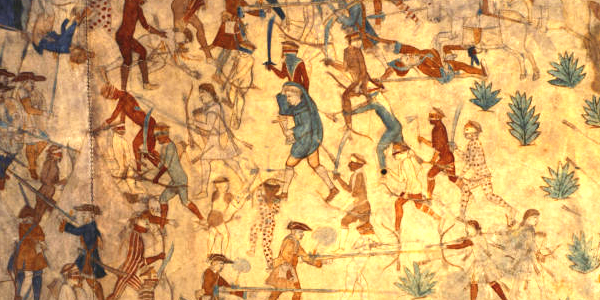 Yes, the Spanish and French did not like each other. The Spanish thought that, since the days of Coronado in the 1540's, that they controlled and owned the plains of the midwest with its potentially rich trade with the Apache and other tribes there, even though there had been little effort to claim it. However, the French were making incursions into that territory, particularly the man known as Bourgmont, who had reached the Platte River circa 1714 and named it the Nebraskier River. With the War of Quadruple Alliance under way since 1718, predominantly in Europe, pitting Great Britain, France, the Holy Roman Empire, and the Dutch against Spain, tensions on the plains of the Americas were punctuated with New Spain's desire to curb what France was doing there.

Lieutenant-General Pedro de Villasur had been the Lieutenant-Governor of New Mexico since 1719 under Governor Antonio Valverde y Cosio. He was an administrator without military experience, but as an ally to the governor, was chosen to lead an expedition to Nebraska to check what was going on. With around forty soldiers, sixty-seventy Indian allies under an African Hopi man, Joseph Naranjo, twelve Apache guides seeking revenge against the Pawnee, one trader with six pack mules, and Father Fray Juan Minquez. At first, Villasur had a modest mission; capture French fur traders in assumed Spanish territory. He did not anticipate its escalation.

For two months, the expedition moved northeast from Santa Fe through Colorado into Kansas, crossing the Republican River, then the Platte into Nebraska. It was August when, after crossing into Oto and Pawnee territory over the Platte and Loup Rivers, that Villasur and his men encountered the Pawnee. An attempt was made to negotiate. Villasur used a Pawnee man, a Spanish slave named Francisco Sistaca for that task, but, after a few days, Sistaca disappeared. At the same time, the numbers of the Pawnee increased, making Villasur uncomfortable and causing him to move his force south to a tall grass meadow near today's Columbus, Nebraska.

At dawn on August 14, 1720, Pawnee warriors slipped through the grass and attacked while the expedition slept. It is unknown, but thought, that Sistaca told the Pawnee how and where to attack. Within minutes, Villasur and thirty-five of his men, including the Priest and Naranjo, had perished. Some of his Indian allies and guides were casualties as well, but most of the Indian allies escaped.

The survivors of the battle returned to Santa Fe on September 6, 1720. An investigation into the defeat lasted for seven years and fear of a French invasion into New Mexico grew, but did not materialize. The defeat, however, did signal the end of Spanish influence in the central plains, and had been the largest Native American victory against the Spanish up until that point.

Where was the Battle?

There have been many debates about the exact location of the battle between the Pawnee and the Villasur Expedition. From the general near the confluence of the Pawnee and Loup Rivers to the location of markers. Today, one marker stands near the Quincentenary Belltower in Pawnee Park in southwest Columbus, Missouri near the Loup River. It reads ...

Near present Schuyler, Nebraska, Villasur's command encountered large numbers of Pawnee and Oto Indians who were allies of the French. The Spanish withdrew to approximately this spot and camped. The next morning, August 14, 1720, the Indians attacked. In only minutes Villasur, L'Archeveque, Naranjo, 3l soldiers, 11 Pueblo Indians, and the priest lay dead. The survivors escaped across the prairie and reached Santa Fe September 6. Spanish losses were the greatest suffered by white men in any battle with Indians on Nebraska soil. 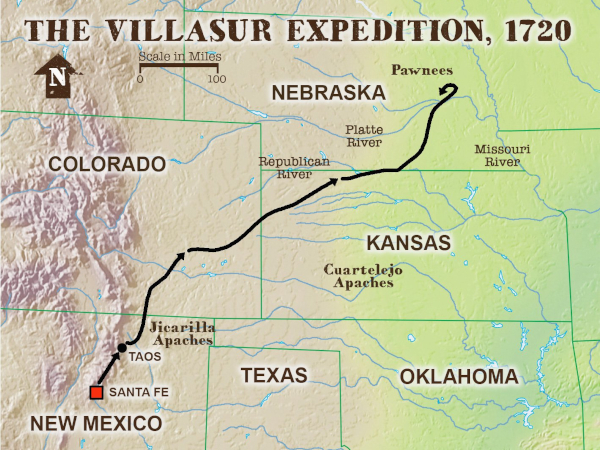