July 25, 1722 - Declaration of war occurs in Dummer's War after skirmishes earlier in the year between New England colonists and the Wabanaki Confederacy, backed by New France. Lasted three years until December 15, 1725. 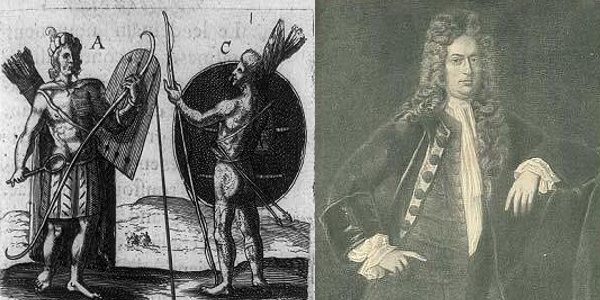 There had been no love lost or tensions lowered after the Ultrecht Treaty ended Queen Anne's War nine years earlier, so when skirmishes began again between colonists and the tribes of the Wabanaki, Mi'kmaq, Maliseet, and Abenaki specifically, there was no real surprise.

The tribes were allied with New France, who, prior to Queen Anne's War, had controlled five colonies, including Acadie (Maine, Maritime Provinces, eastern Quebec), Hudson Bay, and Newfoundland. That treaty had stripped mainland Acadia, Newfoundland, and Hudson Bay from the French, and gave those territories to the British in exchange for the return of lands lost in Europe. This caused problems with the border of Acadia, which New France thought of as the Kennebec River. The British thought otherwise, with disagreements over much of Maine and New Brunswick. The Wabanaki Confederacy had never signed the treaty in the first place, were aghast and confused to why the French King could agree to anything on their behalf, and had no affinity for its tenants. They appealed to the priests in the area, who argued that the confusion was in the wording of the treaty and that the Wabanaki lands and rights had not been given to the British. Their aboriginal rights were still intact. The British, again, thought otherwise.

The Portsmouth Treaty and How It Dissolved

Massachusetts Governor Joseph Dudley realized after the Treaty of Ultrecht that Indian claims in the territory had not been resolved, so he established a conference at Portsmouth and Casco Bay the same year to attempt a solution. The Treaty of Portsmouth agreed to the border at the Kennebec River and government trading posts in Wabanaki territory. Eight representatives of the Wabanaki Confederacy signed the treaty; none were from the Mi'kmaq tribe.

As additional settlements began sprouting up around the territory over the next decade, the Mi'kmaq fought back, particularly against a permanent settlement at Canso in Nova Scotia, prompting a British fort to be built there in 1720. Tension rose sharply after the Wabanaki and New French forces attacked that fort later in the year. The British disagreed with the presence of Father Sebastien Rale, who lived with the Kennebec tribe at Norridgewock in central Maine. They thought he was part of French intrigue to Wabanaki claims to the territory that were asserted. In 1721, Mi'kmaq, Maliseet, and Abenaki ambassadors met with the British in Boston; the Englanders disagreed with the aboriginal claims, asserting that the French had, indeed, ceded their rights to the territories in the Treaty of Ultrecht.

In January 1722, Samuel Shute, Governor of the Province of Massachusetts since 1716, including territory into New Hampshire, Maine, and Nova Scotia, sent a military expedition of three hundred soldiers to capture Father Rale. Rale escaped into the forest, but left behind were letters implicating the priest as an agent of New France, one promising ammunition to the tribes that would rid the area of the colonists.

Raids followed by the Abenaki at Fort George in June, and on Fort St. George on July 15, 1722. A formal declaration of war was declared on July 25, 1722 by Governor Shute against the Wabanakis.

September 10, 1722 - St. Francis and Mi'kmaq Indian tribes, assisted by Father Rale, attack Arrowic, Maine with nearly five hundred soldiers, burning twenty-six houses of the village outside the fort. Settlers retreat into the fort with one killed. During Indian retreat to Norridgewock, they attacked Fort Richmond and destroyed Brunswick and other villages.

April 30, 1724 - Captain Josiah Winslow and Sergeant Harvey with seventeen soldiers leave St. George's Fort on two whaling boats for Green Island and are attacked by two to three hundred Abenaki and Tarrantine Indians. All but three friendly Indians of the English soldier party are killed; twenty-five Indians of the tribes are casualties.

August 22, 1724 - Battle of Norridgewock occurs when two hundred New England soldiers attack and destroy settlement, including the killing Father Rale and villagers. Most of the Abenaki soldiers chose to flee to other villages, instead of defend the settlement.

On July 31, 1725, Lt. Governor Dummer, now acting governor, announced a halt to the war. Peace negotiations had been underway since March with Penobscot Chief Wenanganet; after much disagreement and continuing raids, the peace treaty was signed on December 15, 1725 in Maine and June 15, 1726 in Nova Scotia by many tribal leaders. In July 1727, the tribes of the Abenaki villages of Norridgewock, Penobscot, Becancour and St. Francis also agreed. Most tribes, except some under Gray Lock, now were on board, although many soon after, and today, think they were deceived by the British to its terms, and forced into a diplomatic solution not fully understood, and certainly not fair per aboriginal rights.

Major fighting did not start again between the tribes and New England colonies until King George's War in 1744, and by that time, the population of the Wabanaki Confederacy in the area had diminished. 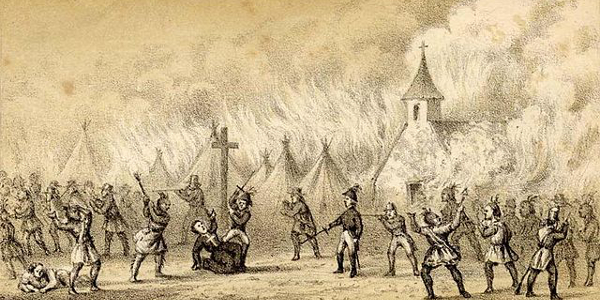