August 4, 1735 - Freedom of the Press became recognized in New York after the trial of John Peter Zenger, who had been accused of libeling the British Government in his Weekly Journal. Zenger was acquitted on that date. 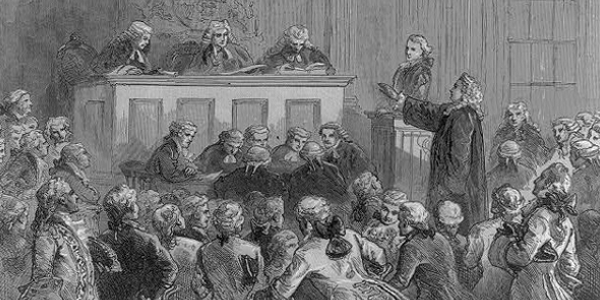 New York City had been a one horse one printer town in the first decades of the 18th century. The New York Gazette had been published since November 8, 1725 by William Bradford, a supporter of the Governor of the Province of New York, William Cosby. Coverage was polite, essentially a mouthpiece for the British. John Peter Zenger was an employee of Bradford at first, an apprentice for eight years since emigration from Germany in 1710, but subsequently took the job of master printer at an independent newspaper, the New-York Weekly Journal, newly published in 1733 by opponents of Governor Cosby, attorneys James Alexander and William Smith. It was very critical of Cosby and what they saw as a violation of the colonial citizen's rights. Cosby would have none of this. He vowed to shut the New-York Weekly Journal down.

However, the governor took a novel approach to that task. He went after the printer, not the owners of the New-York Weekly Journal, assuming that without a printer the paper would not be printed. Logical. In 1734, two Grand Juries were raised to consider the seditious libel that Zenger had printed. Neither indicted Zenger.

Governor Cosby would not rest, however, without putting Zenger on trial and the New-York Weekly Journal out of business, and used a political procedure to bring charges without the grand jury recommendation. On November 17, 1734, John Peter Zenger was arrested. The owners of the New-York Weekly Journal, Alexander and Smith, remained uncharged, but would serve as Zenger's attorneys. They contended that the tribunal of justices on the New York Supreme Court who would hear the case in front of a jury were unfit due to their appointment and loyalty to Cosby. The justices of the New York Supreme Court removed them from the case.

Appointed by the court, newly minted attorney, John Chambers, would mount Zenger's defense, and surprisingly acquitted himself well. As the case adjourned until August, however, Zenger's allies raised another attorney onto their client's behalf, noted legal mind Andrew Hamilton. Hamilton was not related to Alexander Hamilton, but was the pre-eminent attorney in Colonial Philadelphia.

On August 4, 1735, the trial of John Peter Zenger commenced in City Hall (Federal Hall), in New York City. With Chambers and Hamilton conducting the defense, a plea of not guilty was ascribed by Chambers. Hamilton admitted that Zenger had published the articles, but that because they were true, that no libel could be held, and that the entire concept of liberty was at stake.

The judge ordered the jury into deliberations, and ordered them to strike the argument of Hamilton, that they were only to consider whether Zenger had published them and their seditious and caustic nature against Governor Cosby, not their veracity. The jury ignored him and found Zenger not guilty of seditious libel. He was released from jail the next day.

Zenger's trial is often credited with the concepts of freedom of the press that would later be codified in the Bill of Rights (First Amendment) and the United States Constitution, although it took an American Revolution forty years later to convince the British government of that. Zenger was hailed for his innocence, wrote a book (many think it was written by Andrew Hamilton), and was feted in plays about the trial, plus floats in parades for more than a century.

Excerpt, The Tryal of John Peter Zenger, of New-York Printer

Mr. Hamilton. - "May it please your Honour; I am concerned in this Cause on the Part of Mr. Zenger the Defendant. The Information against my Client was sent me, a few Days before I left Home, with some Instructions to let me know how far I might rely upon the Truth of those Parts of the Papers set forth in the Information, and which are said to be libellous. And tho' I am perfectly of the Opinion with the Gentleman who has just now spoke, on the same Side with me, as to the common Course of Proceedings, I mean in putting Mr. Attorney upon proving, that my Client printed and published those Papers mentioned in the Information; yet I cannot think it proper for me (without doing Violence to my own Principles) to deny the Publication of a Complaint, which I think is the Right of every free-born Subject to make, when the Matters so published can be supported with Truth; and therefore I'll save Mr. Attorney the Trouble of Examining his Witnesses to that Point; and I do (for my Client) confess, that he both printed and published the two News Papers set forth in the Information, and I hope in so doing he has committed no Crime."

Mr. Attorney (Attorney General). - "Then if Your Honour pleases, since Mr. Hamilton has confessed the Fact, I think our Witnesses may be discharged; we have no further Occasion for them."

Mr. Hamilton. - "If you brought them here, only to prove the Printing and Publishing of these News Papers, we have acknowledged that, and shall abide by it."

Here my Journeyman and two Sons (with several others subpoena'd by Mr. Attorney, to give Evidence against me) were discharged, and there was Silence in the Court for some Time.

Mr. Attorney (Attorney-General). - "Indeed Sir, as Mr. Hamilton has confessed the Printing and Publishing these Libels, I think the Jury must find a Verdict for the King; for supposing they were true, the Law says that they are not the less libellous for that; nay indeed the Law says, their being true is an Aggravation of the Crime."

Mr. Hamilton. - "Not so neither, Mr. Attorney, there are two Words to that Bargain. I hope it is not our bare Printing and Publishing a Paper, that will make it a Libel: You will have something more to do, before you make my Client a Libeller; for the Words themselves must be libellous, that is, false, scandalous, and seditious or else we are not guilty." 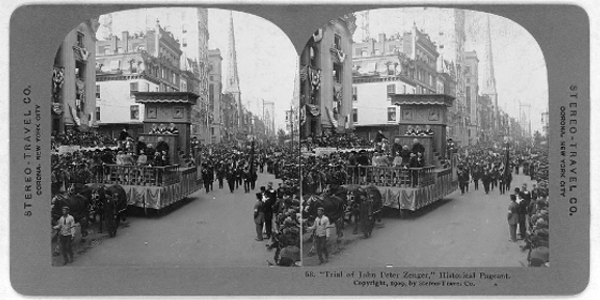