July 14, 1769 - José de Gálvez sends Spanish missionaries into California to begin the establishment of missions at San Diego and Monterey. There would be twenty-one missions established and maintained over the next sixty-four years of the mission period in Spanish California history. 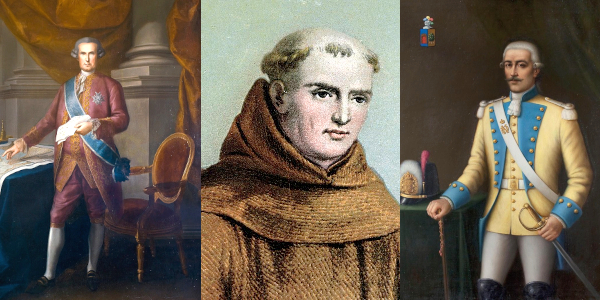 At first, it was a goal of the authorities of New Spain, entrenched in the Mexican territory of Baja California to push north in order to prevent the Russians from pushing south from their colonies in Alaska and the British from pushing south and west from their territorial claims in Canada. At second, it was a battle between the Jesuits and the Franciscans for the conversions of the native population in the Californias, whether Baja, Alta, or elsewhere, as well as a religious presence for the settlers from New Spain who would come.

Eighteen Jesuit missions had been established in Baja California over the years (1683 failed, 1697 first success) since the maritime explorations of Cabrillo in 1542 and Vizcaino in 1602, but as of 1767, were now expelled from the Spanish kingdom by King Charles III. José de Gálvez, Inspector General of New Spain, thought an expedition would be necessary to expel the Jesuits and establish a chain of Franciscan missions across what he termed Las Californias (Baja California, Baja California de Sur, and today's state of California). For the Spanish this would eventually be known as Baja (lower) California and Alta (upper) California. New governor Gaspar de Portolá, October 1767, would be charged with making the transition. The plans of José de Gálvez were made in a dispatch to the King on January 28, 1768.

One year later an expedition was started, with Gaspar de Portolá as its leader, accompanied by the dragoons and infantry he had brought with him from Spain, and missionaries such as Father JunĂ­pero Serra on board to begin the Franciscan missions. There would be three groups traveling by sea and two by land. Their ultimate goal north was the port of Monterey which Vizcaino had described, but the first goal was to meet in San Diego. The first expedition ship, the San Carlos, left La Paz on January 9, 1769 with sixty-two men. On February 15, the second ship, the San Antonio, left Cabo San Lucas with thirty in the crew. A third ship, San José, filled with supplies, left soon after, but was lost at sea prior to reaching San Diego.

"The 11th day of May, [1769], I set out from Santa Maria, the last mission to the north, escorted by four soldiers, in company of Father JunĂ­pero Serra, president of the missions, and Father Miguel Campa. This day we proceeded for about four hours with very little water for the animals and without any pasture, which obliged us to go on farther in the afternoon to find some. There was, however, no water," Gaspar de Portolá diary.

On July 1, the parties met at San Diego. Travel by sea had been difficult, with the supply ship San José lost, and the other ships hit by a bout of scurvy which had cost the crew two-thirds of their men. The land expedition under Portolá and Rivera had made the trip in better shape, although most of their Indian allies brought with them from Baja California had deserted.

"The 1st of July, we travelled for five hours in sight of the port. This day, we arrived at the camp at San Diego, where we found Captain Fernando de Rivera and his men, and, in the port, [we found] anchored the San Carlos and the packet El Principie [or San Antonio.] The greater number of the land-volunteers were sick; of the naval force there remained only a few sailors, and in particular on the San Carlos nearly all the men had died. This predicament left them undecided [what to do]. Here we remained until the 14th day of the month, both to unload the effects belonging to the missions and to make other arrangements to carry out our march. Seeing that there was already falling ... to march as soon as possible. And, because Don Pedro Pratt advised further that the best remedy would be a change of climate, I took with me six volunteers with their lieutenant, Don Pedro Fages, and the engineer, Don Miguel Constansó, who also were sick. We proceeded for three hours. Much pasture, but no water for man or beast," Gaspar de Portolá diary."

On July 14, 1769, Portolá and sixty-four total men continued on their journey toward Monterey, staying close to shore as they watched for the lost ship San José. They reached Los Angeles on August 2. On September 16, they reached the Santa Lucia Range. On October 1, 1769, arriving near Blanco, Portolá and five soldiers walked to a hill and viewed Monterey Bay. However, they did not think that what they saw was the sight Vizcaino had described.

"The 1st of October, we proceeded for an hour, which brought us near the mouth of a river. Here the expedition remained for five days to explore the circuit made by the mountains. We all agreed that, undoubtedly, we would find the Port of Monterey," Gaspar de Portolá diary.

They continued north, reaching the San Francisco area on October 31. On November 11, they turned south back toward San Diego, thinking that they had missed the port, although on the return trip they once again camped near Monterey. The Portolá expedition returned to San Diego on January 24, 1770.

"The 24th, we proceeded for five hours, [and made the same distance as in] two marches on the previous journey. On this day we arrived in San Diego, giving thanks to God that, notwith-standing the great labors and privations we had undergone, not a single man had perished. Indeed we had accomplished our return march, through the great providence of God, without other human aid except that, when we were in dire need, we killed some mules for our necessary sustenance.

We found at San Diego that the three fathers were there with the entire guard of eight soldiers in leather jackets which had been left; but of the fourteen volunteers, who had remained, eight were dead. The San Carlos was anchored in the same place where we had left her; but, during all this time, neither the San Joseph or El Principie, had arrived, although it was eight months since the former was to leave Guaymas and seven months since the latter had left port. For this reason, and because of the lack of provisions, a council was held, and it was resolved that, in order to make it possible to hold this port longer, Don Fernando de Rivera, captain of the presidio [of Loreto], should set out with a strong force so that he might go to [Lower] California and also bring back the herd of cattle which was intended for this mission. The remainder of the expedition was to hold this important port, hoping that God might grant us the comfort of sighting some ship," Gaspar de Portolá diary.

By the date of their arrival back at San Diego, Father JunĂ­pero Serra had established the Mission of San Diego de Acala on July 16, 1769 on Presidio Hill, known as Cosoy by the natives who were known as the Tipai-Ipai or Kumeyaay, just two days after their departure for Monterey. The original compound was primitive, consisting of grass huts and enramadas. He had chosen the site due to its proximity to the Indian villages in the area and near a source of water.

The priests thought, however, that Portolá and his men had reached the desired location of the port of Monterey, but had not recognized it. 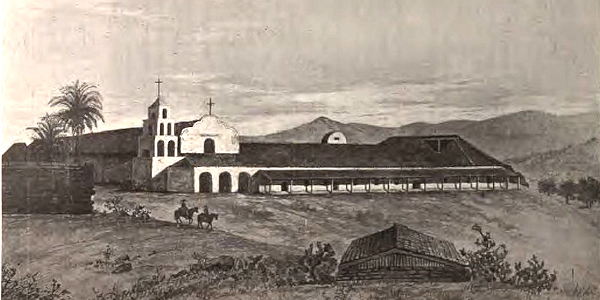 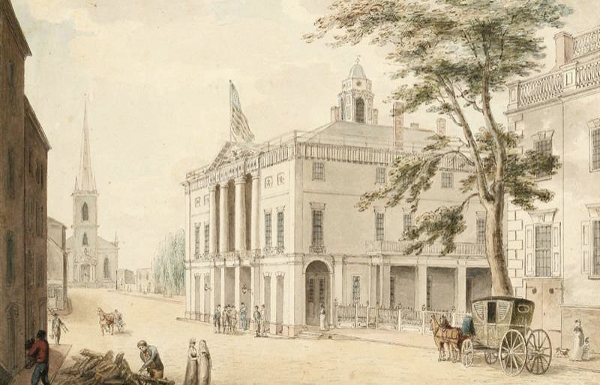 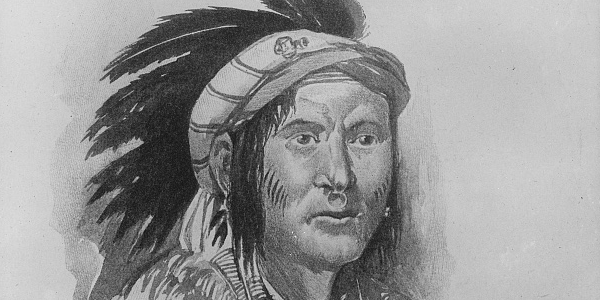