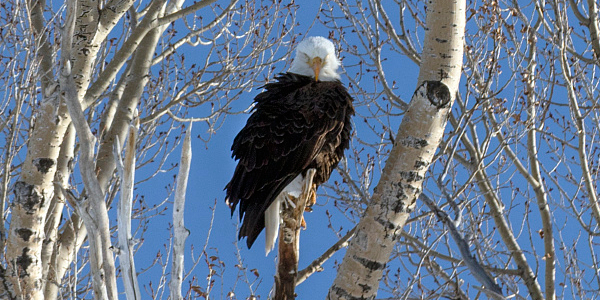 It's a great symbol of our democracy, the Bald Eagle, and on June 20, 1782, it was chosen, even prior to the Constitutional Convention and adoption of the Constitution that would cement that ideals of liberty and democracy into the government lexicon of the United States. So, even then, Congress had the penchant for tackling smaller issues rather than larger ones, although its adoption has served the nation well as that bold and strong symbol on the presidential seal, presidential flag, and symbols of various agencies of the federal government ever since.

But why the Bald Eagle? Well, the Continental Congress was fond of comparing their new nation with the Roman Republic, so they copied their symbol. Did Benjamin Franklin actually want the wild turkey to be the symbol? No, but he also wasn't fond of using the Eagle, at least in a bit of a satirical comment he stated in a letter to his daughter in 1784.

"For my own part I wish the Bald Eagle had not been chosen the Representative of our Country. He is a Bird of bad moral Character. He does not get his Living honestly. You may have seen him perched on some dead Tree near the River, where, too lazy to fish for himself, he watches the Labour of the Fishing Hawk; and when that diligent Bird has at length taken a Fish, and is bearing it to his Nest for the Support of his Mate and young Ones, the Bald Eagle pursues him and takes it from him.

With all this injustice, he is never in good case but like those among men who live by sharping and robbing he is generally poor and often very lousy. Besides he is a rank coward: The little King Bird not bigger than a Sparrow attacks him boldly and drives him out of the district. He is therefore by no means a proper emblem for the brave and honest Cincinnati of America who have driven all the King birds from our country...

I am on this account not displeased that the Figure is not known as a Bald Eagle, but looks more like a Turkey. For the Truth the Turkey is in Comparison a much more respectable Bird, and withal a true original Native of America... He is besides, though a little vain and silly, a Bird of Courage, and would not hesitate to attack a Grenadier of the British Guards who should presume to invade his Farm Yard with a red Coat on," Benjamin Franklin.

And why is the bird named the Bald Eagle? Early English settlers to the Americas used the word piebald to denote the Eagle's white head and tail feathers against his brown body.

When was the symbol of the Bald Eagle as national bird on the official seal first used? George Washington used the symbol on a document to the British about prisoners of war in September 1782.

How Did the Eagle Choice Come About

Directly after the signing of the Declaration of Independence on July 4, 1876, the Continental Congress wanted a national seal. They gave the job to Benjamin Franklin, Thomas Jefferson, and John Adams to design it. Franklin had at one time preferred the rattlesnake as the symbol, and recommended the image of Moses and a Pharoah during First Committee discussions. Subsequently, they failed to come up with a design that Congress would approve of. Two subsequent committees were charged with the task. They failed, too. By June of 1782, there was still no seal and no national bird. All the work of the previous committees was handed to the Secretary of Congress, Charles Thomson.

Thomas took the bald eagle idea from the third committee, one designed by Pennsylvania lawyer William Barton, and enlarged it. Congress liked what he had done, and passed the Bald Eagle into national bird status on June 20, 1782.

Who Were Charles Thomson and William Barton

Just who were these two men that should get credit for the Bald Eagle as national bird and symbol? Charles Thomson was Irish born and emigrated to the United States in 1739 with his father and brothers. His father died at sea and the brothers were separated once arriving in New Castle, Delaware. A blacksmith took him in, but by 1750, he had become a tutor at the Philadelphia Academy. He became allied with Benjamin Franklin, had a falling out, led the Philadelphia Sons of Liberty, and married the sister of Benjamin Harrison. He became the Secretary of the Continential Congress and served in that role throughout their existence, signing the Declaration of Independence as the secretary. In the early days of the United States, Thomson also took a great role in the foreign policy decisions of the nation.

William Barton was Philadelphia born in 1754 to an Irish immigrant and Reverend who ran a school in Norristown, Pennsylvania. He attended school in England, under the study of heraldry, which was the design of armoral bearing. Upon his return to Pennsylvania, Barton became a lawyer and set up practice in Philadelphia, marrying the niece of Continental Congressman Jonathan Bayard Smith. He was an expert on the subject of paper credit, and was awarded honorary Masters of Art from the University of Pennsylvania and the College of New Jersey (Princeton). In May of 1782, the Third Committee contacted him, and asked for his assistance in the design of the Great Seal. He introduced the bald eagle with wings displayed in the Third Committee design, although that specific design was rejected by Congress just as the previous had been. Did Barton suggest any other birds? Yes, the dove, rooster, and phoenix were also on his suggestion list.

Photo above: A bald eagle in the trees of Yellowstone National Park, 2016, Carol Highsmith Collection. Courtesy Library of Congress. Below: The bald eagle as a symbol has been used in almost all political campaigns for president. This poster with the Bald Eagle supported the Whig Party candidacy of Zachary Taylor in 1848. If you look close at the letters of Taylor's name, there is the name of a battle victory he commanded; Fort Harrison, Okee-Cho-Bee, Palo Alto, Resaca del la Palma, Monterey, and Buena Vista, 1848, Joseph Goldsborough Bruff. Courtesy Library of Congress. Sources: Library of Congress; "How did the bald eagle become America's national bird?," Elizabeth Nix, History.com, 2015; Wikipedia Commons; "A Nation of Turkeys: Ben Franklin's Crusade Against the Bald Eagle," Adam Chandler, 2014, the Atlantic; Smithsonian.com; Greatseal.com. 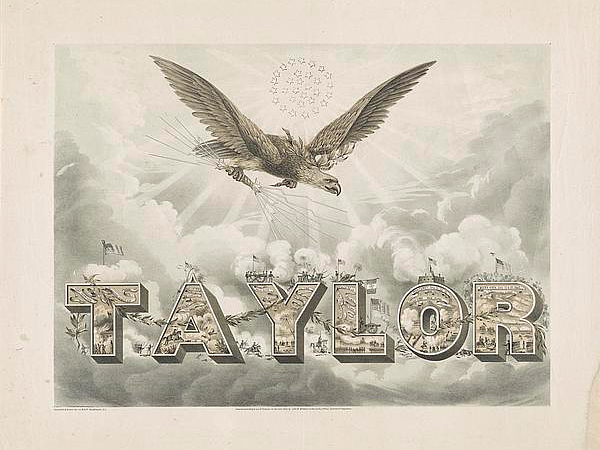