July 20, 1786 - First private test of John Fitch's new invention, the steamboat, occurs on the Delaware River, a sketch appearing in the Columbian magazine in December. The first public demonstration, including members of the Constitutional Convention, is launched on August 22, 1787, a ship with six large paddles, like an Indian canoe, powered by a steam engine. He wanted to get away from manpower to another form of propulsion. For centuries, man had powered their ships by manpower or wind, but never by steam. John Fitch, forty-three years old in 1786, had been working on the concept for the past year. This was despite his background, which began as a laborer on his father's Connecticut farm, as an apprentice clocksmith, and later a successful silversmith in Trenton, New Jersey. The American Revolution, however, in which Fitch was a gunsmith in the New Jersey Militia, cost Fitch his shop after the British occupied Trenton in 1776. John Fitch moved to Warminster, Pennsylvania, near Valley Forge, cleaned clocks for a living and sold beer and tobacco as a suttler to the troops during the 1777-1778 Valley Forge encampment.

For the next six years, Fitch moved around the country with one unsuccessful venture after another, from Kentucky to Pittsburgh to the Ohio River, where, in 1782, he was captured by Indians in consequence of the continuing Revolution, and despite Cornwallis and his surrender at Yorktown in 1781, Fitch was transferred from the Indians to British control and made prisoner in Detroit, then Montreal.

After his release, Fitch worked two years in land speculation to no avail, then returned to Warminster in 1785. While taking a walk in April, Fitch came up with an idea that propelling a vehicle by steam might be possible, even though he had no practical knowledge. While his initial thoughts had to do with propelling a carriage, Fitch transferred his efforts to a design to propel a ship. With assistance from Reverand Nathaniel Irwin, who knew of a system in England to use a steam engine for pumping water from mines, Fitch built a 23" model and tested it in a stream.

These early tests proved to Fitch that his concept had merit, but he needed to convince others in government of its potential and investors that it could make money. He petitioned the Virginia legistature. No luck. He asked the Pennsylvania and Maryland legislatures. No luck again. Fitch petitioned the New Jersey legislature and was awarded a fourteen year exclusive franchise. With that news, Fitch sought investors, raising $300.

With Henry Voight, a clock man who would become chief Coiner of the U.S. Mint in 1793, they built a small boat with a single cylinder engine and tested in on July 20, 1786 on the Delaware River. It failed. On July 27, 1786, with modifications to the side paddles moved by cranks, Fitch and Voight succeeded. Fitch continued to test the models in the fall of 1786, and by February 1787 was back trying to raise funds and interest. Delaware confirmed his rights to the invention and investors granted capital to build a forty-five foot boat with a twelve cylinder engine.

Congress Gets a View

On August 22, 1787, members of the Constitutional Convention were convinced to walk to the Delaware River and get the first true public demonstration of Fitch's steamboat, now named Perseverance. Fitch wanted their aid, but even though the test had been successful, the bill to provide that aid failed on the floor of the House. It is not known, but we can speculate, that George Washington, who had backed a Virginia millwright, James Rumsey, in his effort for a similar idea, had not been in favor. Pure speculation, we admit.

There were additional trials with passengers over the next two years. In the summer of 1790, John Fitch was ready to use his new invention as a steamboat service, taking passengers on a regular basis across the river from Philadelphia to Trenton, New Jersey during the summer and fall. The service, seventeen years prior to that of Robert Fulton on the Hudson River, was a round trip excursion three times per week. The new design by Voight and Fitch was a boat sixty feet long with stern mounted oars. It sped at eight miles per hour and could hold thirty passengers. This was twice as fast as Fulton's boat more than a decade in the future.

A patent to John Fitch was granted on August 26, 1791 for his steamboat design by Thomas Jefferson, head of the first patent board. However, on the same day, James Runsey, as well as two others, were also granted patents for steam engine designs. Without a monopoly on the concept, Fitch lost investors and his commercial enterprise failed for lack of capital.

Today you can visit the John Fitch Steamboat Museum at Craven Hall, Warminster, Pennsylvania. Craven Hall was part of a five hundred and fifty acre land grant given to William Bingley by William Penn in 1681. The museum now occupies a Carriage House on a small part of the original Craven Hall land. 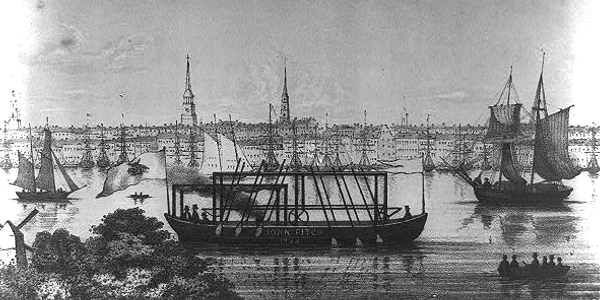