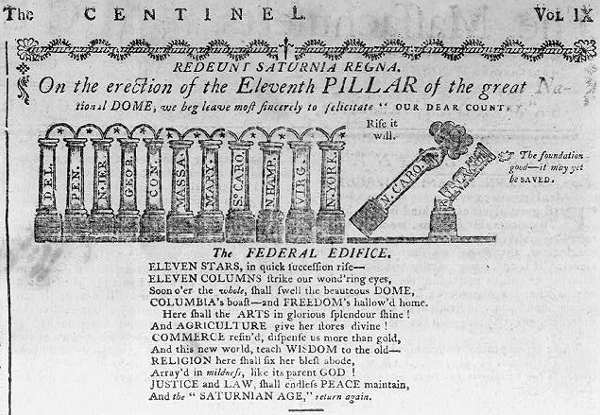 It took nine. Nine states of the thirteen original colonies to ratify the Constitution to make it official. That's what the Constitution had noted in Article VII. State legislatures would call state ratification conventions to consider its adoption. When New Hampshire voted yes on its adoption on June 21, 1788, the United States now had a document to follow for governance, a replacement for the Articles of Confederation. The Compromise that Roger Sherman helmed the year before, the Connecticut Compromise, was accepted.

It had not been easy. Patrick Henry of Virginia urged his state, along with other anti-Federalist colleagues, to vote the illegal document down. He organized a fervent opposition in newspapers, pamphlets, and town meetings. Their argumement. The Constitution was against state's rights in its composition, it favored wealthy landowners, and did not include a Bill of Rights to protect the people against government excess. The Federalists countered that although a Bill of Rights should be a first priority of the new government, to turn the Constitution down now would lead to rebellion. The Federalist Papers, a collection of eighty-five essays written by Alexander Hamilton, James Madison, and John Jay, explained the Constitution and urged its acceptance.

December 7, 1787 - Delaware became the First State to accept, when the legislature voted 30-0 in favor.

December 12, 1787 - Pennsylvania had desperately wanted to be the first to ratify, desiring to be the seat of the national government. However, anti-Federalists in the state assembly prevented a vote calling for the ratifying convention, holding up their effort. Once the convention was held, Pennsylvania delegates voted for approval 46-23.

February 6, 1788 - Massachusetts approved 187-168, linking approval with a recommendation for amendments despite efforts by Anti-Federalists John Hancock and John Adams.

June 25, 1788 - Virginia, despite having a Federalist minority, also linked acceptance to the proposal for a Bill of Rights, voting 89-79 for approval.

June 26, 1788 - New York debated acceptance with two-thirds of its ratification convention delegates in opposition at first. With a recommendation that a Bill of Rights be added to the Constitution, delegates voted 30 to 27 in favor.

November 21, 1788 - North Carolina had waited for the Bill of Rights to be proposed in Congress prior to voting yes. The vote was 194 in favor and 77 opposed.

May 28, 1790 - Rhode Island, which had voted down the Constitution by popular referendum in March 1788 by a margin of 10-1 (2,945 against, 237 for), became the final state to approve despite concerns over federal control of currency and the Constitution's stand on slavery. They had not participated in the Constitutional Convention, and subsequent efforts to hold a ratifying convention were proving difficult, failing eleven times. After receiving threats of being considered a foreign government with consequences to trade relations, and after the First Congress had passed the twelve amendments, it approved the Constitution by just two votes, 34-32.

STATE OF NEW HAMPSHIRE. In Convention of the Delegates of the People of the State of New Hampshire, June the 21st, 1788.

The Convention having impartially discussed and fully considered the Constitution for the United States of America, reported to Congress by the Convention of Delegates from the United States of America, and submitted to us by a resolution of the General Court of said state, passed the 14th day of December last past, and acknowledging with grateful hearts the goodness of the Supreme Ruler of the universe in affording the people of the United States, in the course of his providence, an opportunity, deliberately and peaceably, without fraud of surprise, of entering into an explicit and solemn compact with each other, by assenting to and ratifying a new Constitution, in order to form a more perfect union, establish justice, insure domestic tranquillity, provide for the common defence, promote the general welfare, and secure the blessings of liberty to themselves and their posterity, -- Do, in the name and behalf of the people of the state of New Hampshire, assent to and ratify the said Constitution for the United States of America. And as it is the opinion of this Convention, that certain amendments and alterations in the said Constitution would remove the fears and quiet the apprehensions of many of the good people of this state, and more effectually guard against an undue administration of the federal government,-- The Convention do therefore recommend that the following alterations and provisions be introduced in the said Constitution:--

I. That it be explicitly declared that all powers not expressly and particularly delegated by the aforesaid Constitution are reserved to the several states, to be by them exercised.

II. That there shall be one representative to every thirty thousand persons, according to the census mentioned in the Constitution, until the whole number of representatives amount to two hundred.

IV. That Congress do not lay direct taxes but when the moneys arising from impost, excise, and their other resources, are insufficient for the public exigencies, nor then, until Congress shall have first made a requisition upon the states to assess, levy, and pay, their respective proportions of such requisition, agreeably to the census fixed in the said Constitution, in such way and manner as the legislature of the state shall think best; and in such case, if any state shall neglect, then Congress may assess and levy such state's proportion, together with the interest thereon, at the rate of six per cent. per annum, from the time of payment prescribed in such requisition.

V. That Congress shall erect no company of merchants with exclusive advantages of commerce.

VI. That no person shall be tried for any crime by which he may incur an infamous punishment, or loss of life, until he first be indicted by a grand jury, except in such cases as may arise in the government and regulation of the land and naval forces.

VII. All common-law cases between citizens of different states shall be commenced in the common-law courts of the respective states; and no appeal shall be allowed to the federal court, in such cases, unless the sum or value of the thing in controversy amount to three thousand dollars.

VIII. In civil actions between citizens of different states, every issue of fact, arising in actions at common law, shall be tried by jury, if the parties, or either of them, request it.

IX. Congress shall at no time consent that any person, holding an office of trust or profit under the United States, shall accept any title of nobility, or any other title or office, from any king, prince, or foreign state.

XI. Congress shall make no laws touching religion, or to infringe the rights of conscience.

XII. Congress shall never disarm any citizen, unless such as are or have been in actual rebellion.

And the Convention do, in the name and in behalf of the people of this state, enjoin it upon their representatives in Congress, at all times until the alterations and provisions aforesaid have been considered agreeably to the fifth article of the said Constitution, to exert all their influence, and use all reasonable and legal methods, to obtain a ratification of the said alterations and provisions, in such manner as is provided in the article.

And that the United States in Congress assembled may have due notice of the assent and ratification of the said Constitution by this Convention, it is Resolved,

That the assent and ratification aforesaid be engrossed on parchment, together with the recommendation and injunction aforesaid, and with this resolution; and that John Sullivan, Esq., president of the Convention, and John Langdon, Esq., president of the state, transmit the same, countersigned by the secretary of Convention, and the secretary of state, under their hands and seals, to the United States in Congress assembled. 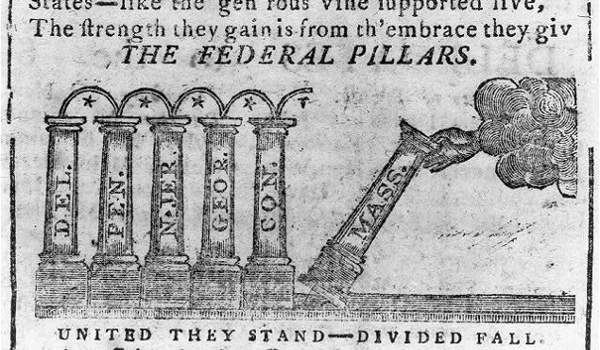