September 8, 1810 - Thirty-three employees of the Pacific Fur Company founded by John Jacob Astor embark on a six month journey around South America from New York Harbor. Arriving at the mouth of the Columbia River on the ship Tonquin, in present day Oregon, they found the fur-trading town of Astoria. John Jacob Astor was not a satisfied man. His establishment of the American Fur Company in 1808 had only begun his empire into the fur trade in North America; it was time to expand. The Pacific Fur Company would be founded to compete in the disputed Oregon territory with the British-Canadian counterpart, the North West Company. At the same time, Astor's Southwest Fur Company had designs on the Great Lakes and other locations. Part of the reason for establishing these cross country companies was to create a chain of trading stations across the Rocky Mountains to the Pacific Coast.

To begin this venture, Astor funded the entire $200,000 capital, with the American Fur Company holding half of all stock and the other half divided amongst the management and clerks. He envisioned creating a company town surrounding a site he would name Fort Astoria, today's Astoria, Oregon. On June 23, 1810, the new fur company was established.

There would be a two pronged approach to getting employees to Oregon country as well as establish those trading posts along the way. Some employees would travel overland by the trail established on the Lewis and Clark Expedition. These would be led by Wilson Hunt and Donald Mackenzie, and consisted of approximately thirty men. They left in July, arrived at Mackinac Island on July 28, then St. Louis on September 3.

The others would venture by ship around the Cape Horn of South America and sail to the Oregon coast on the trading ship Tonquin. This group would be headed by Alexander McKay, leaving New York on September 3, 1810. The ship was captained by Jonathan Thorn. By December 4, 1810, they had reached the Falkland Islands; on December 25, 1810, they had passed Cape Horn. In February, they landed in Hawaii to gain supplies, and hired twenty-four Hawaiians, agreed upon by King Kamehameha I. On March 24, 1811, they finally anchored in Baker's Bay up the Columbia River, and the ship remained there for sixty-five days before heading out on a trading mission north with twenty-three men. Near Vancouver Island, a scuffle with the Tla-o-qui-aht people of Clayoquot Sound ended with the killing of all twenty-three men and the destruction of the ship.

The remaining men of the expedition, now without transport, began construction of Fort Astoria, the first American owned settlement on the Pacific Coast, in April 1811, five miles from the Lewis and Clark Expedition's Fort Clatsop. It was situated on Point George. The building took longer than anticipated, as most of the men left had little logging experience, but by the end of May, a stockade had been constructed with guns mounted to defend it. By the time the overland party reached the fort in February 1812, a trading store, blacksmith shop, house, and storage shed had been added. On May 9, 1812, the second supply ship, the Beaver, sent by Astor, finally arrived. By June, the count of men at the fort included only eleven Hawaiians and thirty-nine Europeans. Life was difficult and the Pacific Fur Company struggled. There was constant fear of attack from the Chinookan people; when the War of 1812 started, that fear of attack now included the British.

On July 1, 1813, the officers of the fort had had enough and wanted to abandon it and sell the trading stations of the company to the British-Canada North West Company. On October 23, the assets of the Pacific Fur Company were liquidated to their competitor. Fort Astoria was renamed Fort George, after King George III, and was used by the North West Company, and later the Hudson Bay Company, until 1824-1825, and later for seasonal use from 1830-1848. It was not until the Oregon Treaty of 1846 that the territory around Fort Astoria became full United States property.

Astoria, Oregon is now a town of around ten thousand population, and maintains a replica of the Fort Astoria/Fort George site with blockhouse for visitation. The Fort Astoria site was added to the National Historic Landmarks registry on November 5, 1961. 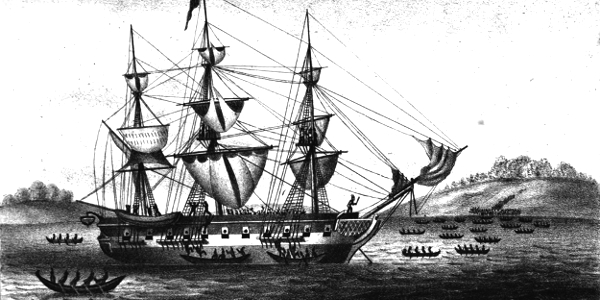