July 4, 1817 - The construction of the Erie Canal begins at Rome, New York. The first section between Rome and Utica would be completed two years later. The canal would eventually connect the Atlantic Ocean, through the Hudson River, to the Great Lakes, with 83 locks over its 363 miles. The canal, when completed in 1825, would cut transport costs by 90%. 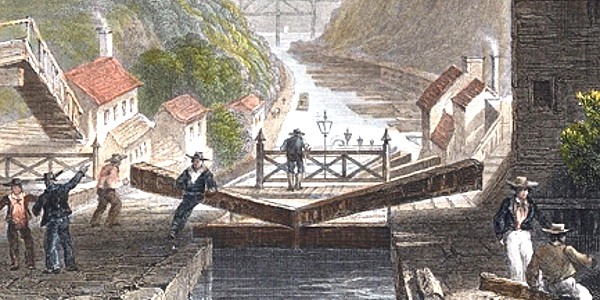 At the time of its construction, it was a necessary route to bring shipments from New York City to the Great Lakes. In time, it would be known as Clinton's folly, although that would prove, in the end, not to be accurate. No, not Bill, but DeWitt, the Governor, of New York. Proposals for a route from the east to midwest that did not require portage had been bantied about for years. There was no railroad and a trip by stage took weeks. The original proposal, in the 1780's, would be reintroduced in 1807. By 1808, a study was authorized and completed. While it took until 1817 until DeWitt Clinton could get the legislature to appropriate funds, it finally did, seven million dollars worth.

Two cities competed to be the western terminus of the project; Black Rock on the Niagara River, and Buffalo on Lake Erie. Although it seems ridiculous today to think of those two cities as competition, at the time Black Rock was part of the conversation for the western end. But its proximity to Canada became a hindrance, with the War of 1812 a recent memory and the twice burning of that town, Black Rock, during the conflict, pushing Buffalo to victory. At the time, Buffalo had a population of 2,400. By 1850, in large part due to the Erie Canal, Buffalo's population had exploded to 81,000. Today, Black Rock is now part of Buffalo.

The Erie Canal was completed on October 25, 1925. A state celebration ensued. It had cost $7,143,000. Governor DeWitt Clinton, on the boat Seneca Chief, took a ten day journey from Buffalo to New York City, then returned. Within the first year, the tolls collected exceeded the construction debt.

The popularity of the canal exceeded its capacity, 1.5 million tons, immediately. A project to widen the canal to 70 feet and its depth to 7 feet began in 1834. The project took until 1862, during the Civil War, to complete. When enlarged, the canal could handle boats with a capacity of 240 tons. Success of the Erie Canal spurred feeder canals to be built in many locations; Cayuga-Seneca Canal, Oswego Canal, Champlain Canal, Chemung Canal, Chenango Canal, among others. By 1903, the need for a larger canal spurred the legislature of New York to authorize the New York State Barge Canal. It was built from 1905 to 1918, costing $96.7 million, could handle boats up to 3,000 ton capacity, and was 120 to 200 feet wide. By 1951, that canal carried 5.2 million short tons.

Although the Erie Canal was envisioned as primarily a commercial busines enterprise, it soon became a popular tourist attraciton with packet boat taking passengers on excursions up the canal, up to 40,000 per year. In 1905, the popular song, Low Bridge, Everybody Down, Fifteen Years on the Erie Canal, was written by Thomas S. Allen.

We've hauled some barges in our day
Filled with lumber, coal, and hay
And every inch of the way I (we) know
From Albany to Buffalo

Image above: Engraving of the Erie Canal at Lockport, New York, by W.H. Bartlett, 1839. Courtesy Wikipedia Commons. Image below: Governor DeWitt Clinton and guests on the Seneca Chief on the first voyage of a boat on the Erie Canal, 1905, halftone reproduction of painting. Courtesy Library of Congress. Source Info: Wikipedia Commons; Eriecanal.org. 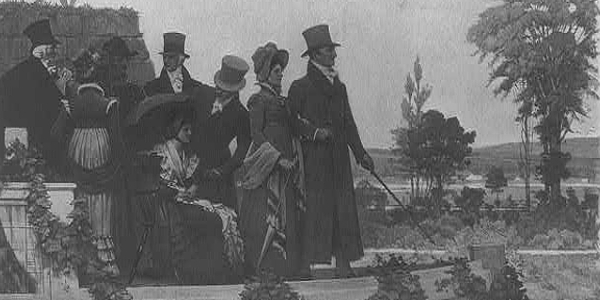