October 20, 1818 - The northern boundary of the United States and Canada is established between the U.S.A. and the United Kingdom. Its location from the Lake of the Woods to the Rocky Mountains would be the 49th parallel. 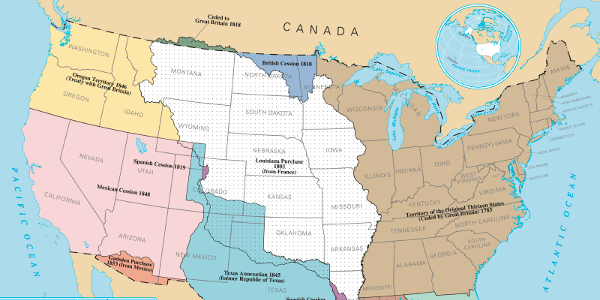 Today, there's no talk of a wall along the border between Canada and the United States, but, in 1818, disputes about the border were rampant. No, there was no talk of a wall then either, but disagreement between Great Britain, their possession Canada, and the United States had already been part of the reason why there had been two wars, the American Revolution, and the War of 1812, in the fifty years prior.

With the War of 1812 ending in 1815, it had been three years since outward conflict between Great Britain and the United States ended with the Treaty of Ghent. Relations between the two nations began to improve with the 1817 Rush-Bagot Treaty that limited naval armanents on the Great Lakes and Lake Champlain. This went a large way toward reducing tensions along the Canadian border. But it was the Treaty of 1818, also known as the London Convention or the Anglo-American Convention of 1818, that solidified those gains.

The treaty was three fold, dealing with the border issue, the restoration of slaves, and the fisheries. It was negotiated between Albert Gallatin, the United States Ambassador to France and Richard Rush, Minister to Great Britain, with their British counterparts Frederick John Robinson, Treasurer of the Royal Navy, and Henry Goulburn, undersecretary of State. For the boundary issue, the 49th parallel would be chosen west of the Lake of the Woods in Minnesota, Manitoba, and Ontario, except for joint jurisdiction over the Oregon Territory for ten years. This gave the United States part of Rupert's Land and the Red River Colony south of the parallel. The United States lost part of the Missouri Territory north of the parallel.

There were problems with the treaty, however, as joint jurisdiction over the Oregon Territory caused consternation with the practices of the Hudson Bay Company around Fort Vancouver to discourage United States settlement. This led to the Treaty of Oregon in 1846, stating a more fixed 49th parallel as the border. Even that treaty, however, did not stop all problems, as the Pig War on the San Juan Islands would attest in 1859. Yes, there was almost a war over a pig that might have scuttled all those 49th parallel treaties.

How the Treaty Affected Slavery and Fishing Rights

Slavery - There had been an issue with the wording in the Treaty of Ghent about how slaves would be treated between the two nations. The United States had wanted the return of slaves, or compensation, for those in British Territory or on British Naval vessels when the War of 1812 ended. They stated that the Treaty, which talked about property, also included slaves. The Treaty of 1818 did not address the issue of slavery per se, and certainly did not halt it, but agreed to let a third party handle the disagreement.

Fisheries - The Unites States gained rights to fish in the waters off Newfoundland and Labrador.

Full Text, Convention of 1818 between the United States and Great Britian

The United States of America, and His Majesty The King of the United Kingdom of Great Britain and Ireland, desirous to cement the good Understanding which happily subsists between them, have, for that purpose, named their respective Plenipotentiaries, that is to say: The President of the United States, on his part, has appointed, Albert Gallatin, Their Envoy Extraordinary and Minister Plenipotentiary to the Court of France; and Richard Rush, Their Envoy Extraordinary and Minister Plenipotentiary to the Court of His Britannic Majesty: And His Majesty has appointed The Right Honorable Frederick John Robinson, Treasurer of His Majesty's Navy, and President of the Committee of Privy Council for Trade and Plantations; and Henry Goulburn Esquire, One of His Majesty's Under Secretaries of State: Who, after having exchanged their respective Full Powers, found to be in due and proper Form, have agreed to and concluded the following Articles.

ARTICLE I. - Whereas differences have arisen respecting the Liberty claimed by the United States for the Inhabitants thereof, to take, dry, and cure Fish on certain Coasts, Bays, Harbours, and Creeks of His Britannic Majesty's Dominions in America, it is agreed between The High Contracting Parties, that the Inhabitants of the said United States shall have for ever, in common with the Subjects of His Britannic Majesty, the Liberty to take Fish of every kind on that part of the Southern Coast of Newfoundland which extends from Cape Ray to the Rameau Islands, on the Western and Northern Coast of Newfoundland, from the said Cape Ray to the Quirpon Islands on the Shores of the Magdalen Islands, and also on the Coasts, Bays, Harbours, and Creeks from Mount Joly on the Southern Coast of Labrador, to and through the Streights of Belleisle and thence Northwardly indefinitely along the Coast, without prejudice however, to any of the exclusive Rights of the Hudson Bay Company: and that the American Fishermen shall also have liberty for ever, to dry and cure Fish in any of the unsettled Bays, Harbours, and Creeks of the Southern part of the Coast of Newfoundland hereabove described, and of the Coast of Labrador; but so soon as the same, or any Portion thereof, shall be settled, it shall not be lawful for the said Fishermen to dry or cure Fish at such Portion so settled, without previous Agreement for such purpose with the Inhabitants, Proprietors, or Possessors of the Ground. And the United States hereby renounce for ever, any Liberty heretofore enjoyed or claimed by the Inhabitants thereof, to take, dry, or cure Fish on, or within three marine Miles of any of the Coasts, Bays, Creeks, or Harbours of His Britannic Majesty's Dominions in America not included within the above mentioned Limits; provided however, that the American Fishermen shall be admitted to enter such Bays or Harbours for the purpose of Shelter and of repairing Damages therein, of purchasing Wood, and of obtaining Water, and for no other purpose whatever. But they shall be under such Restrictions as may be necessary to prevent their taking, drying or curing Fish therein, or in any other manner whatever abusing the Privileges hereby reserved to them.

ARTICLE III. - It is agreed, that any Country that may be claimed by either Party on the North West Coast of America, Westward of the Stony Mountains, shall, together with it's Harbours, Bays, and Creeks, and the Navigation of all Rivers within the same, be free and open, for the term of ten Years from the date of the Signature of the present Convention, to the Vessels, Citizens, and Subjects of the Two Powers: it being well understood, that this Agreement is not to be construed to the Prejudice of any Claim, which either of the Two High Contracting Parties may have to any part of the said Country, nor shall it be taken to affect the Claims of any other Power or State to any part of the said Country; the only Object of The High Contracting Parties, in that respect, being to prevent disputes and differences amongst Themselves.

ARTICLE IV. - All the Provisions of the Convention "to regulate the Commerce between the Territories of the United States and of His Britannic Majesty" concluded at London on the third day of July in the Year of Our Lord One Thousand Eight Hundred and Fifteen, with the exception of the Clause which limited it's duration to Four Years, & excepting also so far as the same was affected by the Declaration of His Majesty respecting the Island of st Helena, are hereby extended and continued in force for the term of ten Years from the date of the Signature of the present Convention, in the same manner, as if all the Provisions of the said Convention were herein specially recited.

ARTICLE V. - Whereas it was agreed by the first Article of the Treaty of Ghent, that "All Territory, Places, and Possessions whatsoever taken by either Party from the other during the War, or which may be taken after the signing of this Treaty, excepting only the Islands hereinafter mentioned, shall be restored without delay; and without causing any destruction, or carrying away any of the Artillery or other public Property originally captured in the said Forts or Places which shall remain therein upon the Exchange of the Ratifications of this Treaty, or any Slaves or other private Property"; and whereas under the aforesaid Article, the United States claim for their Citizens, and as their private Property, the Restitution of, or full Compensation for all Slaves who, at the date of the Exchange of the Ratifications of the said Treaty, were in any Territory, Places, or Possessions whatsoever directed by the said Treaty to be restored to the United States, but then still occupied by the British Forces, whether such Slaves were, at the date aforesaid, on Shore, or on board any British Vessel lying in Waters within the Territory or Jurisdiction of the United States; and whereas differences have arisen, whether, by the true intent and meaning of the aforesaid Article of the Treaty of Ghent the United States are entitled to the Restitution of, or full Compensation for all or any Slaves as above described, the High Contracting Parties hereby agree to refer the said differences to some Friendly Sovereign or State to be named for that purpose; and The High Contracting Parties further engage to consider the decision of such Friendly Sovereign or State, to be final and conclusive on all the Matters referred.

ARTICLE VI. - This Convention, when the same shall have been duly ratified by The President of the United States, by and with the Advice and Consent of their Senate, and by His Britannic Majesty, and the respective Ratifications mutually exchanged, shall be binding and obligatory on the said United States and on His Majesty; and the Ratifications shall be exchanged in Six Months from this date, or sooner, if possible.

In witness whereof the respective Plenipotentiaries have signed the same, and have "hereunto affixed the Seal of their Arms.

Done at London this Twentieth day of October, in the Year of Our Lord One Thousand Eight Hundred and Eighteen. 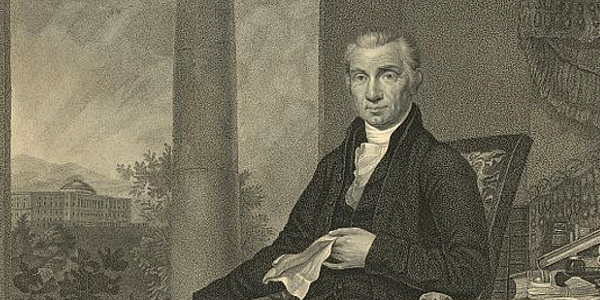