October 14, 1834 - Henry Blair receives the second patent awarded to an African American when he patents a corn planter. 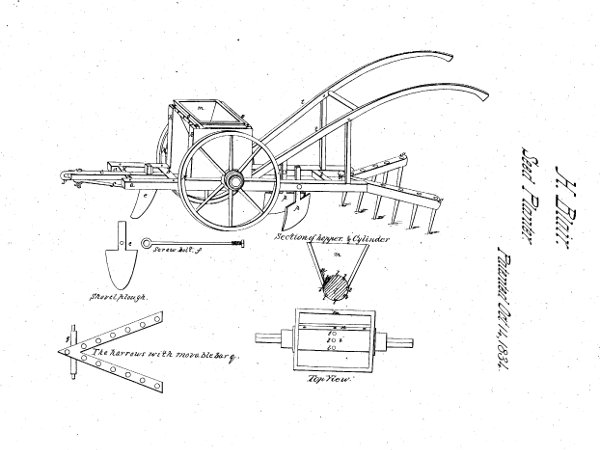 Henry Blair was a free colored man from Glen Ross, Maryland, thought to be free from birth, although his status has not been verified for certain. He was an independent farmer. In 1834, he invented a practical machine that could plant corn seeds faster than a man. Fashioned after a wheel barrow, the Seed-Planter was thought to plant those seeds at a speed that was equivalent to that of eight men. It was a noteworthy invention at a time, written up in the Mechanics Magazine, see below, when men of all color could apply and be granted patents. Thought to be the first man of color to be granted a patent for more than sixty years, it was later revealed in 1900 that Thomas L. Jennings, although not listed on the patent as a black man (Blair is the only patent holder listed as a "colored man" on his patent), had been granted a patent in 1821.

Prior to 1858, patents could be granted to any man of any color, freed or enslaved. The law was changed in 1858, as the debate on free and slave states and those implications raged prior to the Civil War, to read that only men with citizenship could hold patents; therefore slaves or freed men or color were not applicable. Six years after the Civil War ended in 1865, the law was changed back to all men.

The Mechanics' Magazine (August 6, 1836) - Corn and Planting Machine - A free man of colour, Henry Blair by name, has invented a machine called the corn-planter, which is now exhibiting in the capital of Washington. It is described as a very simple and ingenious machine, which, as moved by a horse, opens the furrow, drops (at proper intervals, and in an exact and suitable quantity,) the corn, covers it, and levels the earth, so as, in fact, to plant the corn as rapidly as a horse can draw a plough over the ground. The inventor thinks it will save the labour of eight men. He is about to make some alterations in it to adapt it to the planting of cotton. - New York Paper.

To all to whom these presents shall concern:

Be it known that I, Henry Blair of Glen Ross in the county of Montgomery, and the State of Maryland, have invented a new and useful improvement in the machine for planting corn, called the corn planter, and that the following is a full and exact description of the construction and operation of the same, as invented or improved by me. -

The frame of the machine is made as follows. Two side pieces four feet six inches long ? ? two cross pieces being tenoned into them, one at ten inches from the end that will make the front of the machine, and the other at fourteen inches from the other end or back; the timber of which this frame is made is three by four inches. The beam to which the horse is to be attached, is twenty inches in length, tenoned into the front cross piece, in the middle between the two side pieces, and there is a brace piece of timber, one by five inches, which passes through a mortise cut into the beam. The ends of this piece are tenoned into the side pieces within two inches of their ends. To this beam is affixed a shovel plough to make the furrow, the plough bar passes through the beam sideways between the front cross piece and the brace above mentioned, and is fastened on the top with a ?. A ? ? passes thru' the plough bar, made fast on the front with ? and screws; and the other end has a hole through which passes the clevis bolt; the end of the beam is provided with a ? ? to which is ? a ?

On the top of the two side pieces are fastened two head blocks fourteen inches long, five and a half high and three thick. They are tenoned into the side pieces within sixteen inches of the front and a hole is cut through each, to receive a cylinder hereafter mentioned. The dropping cylinder is six inches in diameter, between the head blocks and at each end there is a space of three inches in length that is reduced to four inches diameter which forms the bearings of the cylinder and work in head blocks above mentioned; it then extends six inches (on each side) out side of the head blocks, and is there permanently attached to wheels of two feet six inches in diameter. There are holes in the cylinder on its periphery sufficiently large to hold two, three or four grains of corn; these holes may be of any number as the number of the holes, and the diameter of the wheels will regulate the distance at which the corn is to be dropped. A box or hopper is constructed immediately above the cylinder, which covers about one third of its diameter, and extends the whole length of the cylinder between the head blocks. This box or hopper can be made to hold two or three gallons. The front part of this hopper, that is, the side towards which the cylinder revolves, is provided with a bar of iron extending the whole length of the hopper, one inch wide and a quarter of an inch thick, bevelled to an edge from the top; the lower surface of this iron hard rides on the cylinder to prevent the grains of corn from crowding in between the cylinder and the edge of the box or hopper.

There are two wooden braces which are made fast to the front and back of the hopper, by means of ? ? that extend from one head block to the other and are provided with a ? at each end so arranged as that when either the surface of the cylinder or the edge of the hopper wears out by turning the ? ? edge of the hopper can be made to rest on the surface of the cylinder. Between the cylinder and the back cross piece is to be attached by means of screw bolts to the inside of the two side pieces two shovels made right and left ?? the earth into a ridge. Eight inches behind the back cross piece is a wooden ... ?? .... To this ? ? is attached a harrow made of two pieces of wood, put together in a triangle having its base open and its apex attached to the bar just mentioned. The teeth which are inserted into the harrow are nine inches long at the apex of the triangle and increase in length until they reach eleven inches at the base of the triangle. The back part of this harrow will be at liberty to play up and down, having its front part attached to the ? bar. The handles are four feet long, having their lower ends let into the lower part of the head blocks and their upper ends elevated to two feet seven inches above the frame; they are framed in the usual manner.

Operation: When the horse draws the machine the shovel plough makes a furrow to receive the grain; the cylinder in revolving with the wheels to which it is permanently attached, catch the grains in the holes (which are made on its periphery) as they pass through the hopper and lets them drop into the furrow; the ? then throw the earth into a ridge over the grains & the harrow passing over it levels the earth and carries the large clods and stones away. The proportions herein stated may be varies at pleasure.

What I claim as new and as my invention and for which I ask Letters Patent, is, the general arrangement and combination of the several parts. As a further illustration of my invention, I refer the model and drawing which accompany this.

In testimony that the above is a full and exact description of the construction and operation of my machine as invented or improved by me. I have hereunto subscribed my hand this first day of September in the year of our Lord one thousand eight hundred & thirty four.

Original patent was handwritten. Above transcribed from Today in Science History.

What About Thomas L. Jennings

Yes, it seems odd that Thomas Jennings, until the year 1900, was not considered the first African American to be granted a patent. Known now as Patent X3306 for a machine that could dry scour clothes, i.e. dry cleaning, applied 1820 and granted in 1821, Thomas Jennings was free at birth, born in New York City, and owned a tailoring business on Church Street in Lower Manhattan. With the profits from his invention at thirty years of age in 1821, he bought his wife's (born into slavery and now considered an indentured servant) and three children's full freedom, buying out their future apprenticeships.

Jennings was a noted abolitionist. In June 1831, he was the assistant secretary to the First Annual Convention of the People of Color in Philadelphia, and twenty-one years later, in 1855, was at the forefront of organizing the Legal Rights Association. 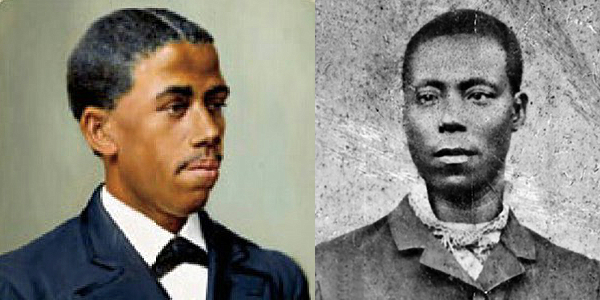