February 25, 1837 - The patent for the first United States electronic motor is awarded to Thomas Davenport. Davenport would use it in 1840 to print the first newspaper by electricity. 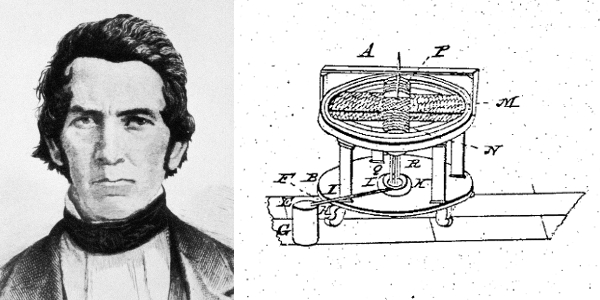 It was the first patent for an electric motor. Its application could be used for any reasonable purpose. In 1840, three years after the patent had been issued, Thomas Davenport put in into practice. He printed the first newspaper to be printed using electricity, the Electro-Magnetic and Mechanics Intelligencer, a New York City paper devoted to the subject of his devotion. It was the first technical journal on electricity.

But how did Thomas Davenport get there? Four years before the patent would be issued, Davenport and his wife Emily, began to work on an electric motor that he thought would be useful in running streetcars. A blacksmith by trade, Davenport had been inspired by his visit to an iron works factory in Crown Point, New York, the Penfield and Taft Iron Works, that was using an electro-magnet designed by Joseph Henry to lift seven hundred and fifty pounds of iron. So Thomas sold his horse and bought one magnet. Emily, Thomas, and colleague Orange Smalley, worked on adapting that electromagnet with better iron core and wiring, using four magnets instead of one, and even used the silk from his wife's wedding dress in the design. Davenport built a small model streetcar or train and a circular track to test it. He exhibited at Middlebury College and showed it to the public. However, when Davenport attempted to patent the first design of his motor in 1834, it was rejected. The patent office was not yet awarding patents on the subject of electricity.

Now, there was also competition from overseas. Anyons Jedlik had been working on a motor commutator since 1828. It is thought that neither knew of each other's work. Davenport began experimenting on how the motor could be used beyond its application for streetcars. He built electrically powered lathes in 1836, then attempted to gain a patent for the direct current motor again. He sold one motor to the Rensselaer Institute, the first United States engineering school. Finally, on February 25, 1837, he was awarded the patent which he, his wife, and partner had contributed to its design.

Improvement in Propelling Machinery by Magnetism and Electro-Magnetism.

To all whom it may concern:

Be it known that I, THOMAS DAVENPORT, of the town of Brandon, in the county of Rutland, State of Vermont, have made a discovery, being an Application of Magnetism and Electro-Magnetism to Propelling Machinery, which is described as follows, reference being had to the annexed drawings of the same, making part of this specfication.

The machine for applying the power of magnetism and electro-magnetism is described as follows: The frame A may be made of a circular or any other figure, divided into two or more platforms, B and C, upon which the apparatus rests, of a size and strength adapted for the purpose intended.

The galvanic battery D is constructed by placing plates of copper and zine E and F, alternately of any figure, in a vessel of diluted acid, G. From each vessel are two conductors, H and I, one from the copper and one from the zinc, leading to and in contact with copper plates K and L placed upon the lower platform. These plates or conductors are made in the form of a segment of a circle corresponding in number with the artificial magnets hereinafter described, placed around the shaft detached from one another and from the shaft, having a condustor leading from the copper plate of the battery to one of said plates on the lower platform, and another conductor leading from the zinc plate of the battery to the next plate on said lower platform, and so on alternately (if there be more than two plates on said lower platform) around the circle.

The galvanic magnets M N O P are constructed of arms or pieces of soft iron in the shape of a straight bar, horseshoe, or any other figure, wound with copper wire Q first insulated with silk between the coils. These arms project on lines from the center of a vertical shaft, R, turning on a pivot or point in the lower platform, said copper wires Q extending from the arms parallel, or nearly so, with the shaft, down to the copper plates K and L and in contact with them. The galvanic magnets are fixed on a horizontal wheel or wood, V, attached to the shaft.

The discovery here claimed, and desired to be secured by Letters Patent, consists in -

Applying magnetie and electro-magnetic power as a moving principle for machinery in the manner above described, or in any other substantially the same in principle.

With the patent in hand, but the design not yet of the strength to garner and move an actual streetcar, Davenport began putting it to other uses from a new workshop in New York City. There was a design for an electric piano. There were applications for use in weaving, harvesting, milling, plowing, and printing. Designing an one hundred pound battery to attach to a printing press in 1839, the next year he began to publish the weekly, The Electro-Magnet and Mechanics Intelligencer, devoted to electricity, which was edited by Thomas Davenport, eight pages per month, and published at 42 Stanton Street, New York City, the first on January 18, 1840. The paper was not a success and discontinued publication during the first year. Making the motor successful in other applications was also difficult and profitability for Davenport did not come. Batteries were expensive and steam power continued to be more practical in industrial use for several decades. 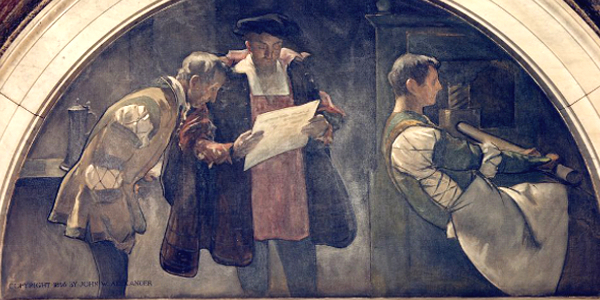