January 6, 1838 - Samuel Morse, a portrait painter who later turned to invention, first publicly demonstrated the telegraph and developed the Morse Code system of communication. He would apply for a patent two years later in 1840. 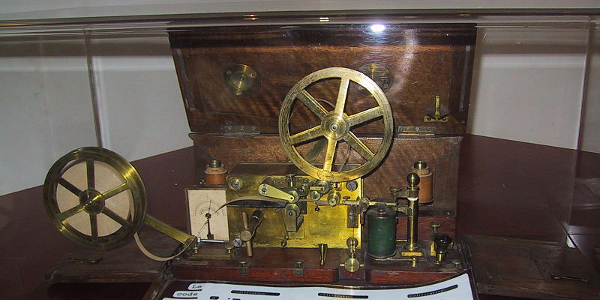 Inventions were not his normal profession, but Samuel Morse had been tinkering with his idea of communication based on the European telegraph system for several years before he thought this invention, the single wire telegraph, was ready for public view. So in January of 1838, he decided that a public demonstration was in order. There are a variety of dates associated with this demonstration, and in some likelihood, there were a variety of demonstrations.

It had been reported that on January 6 (11), 1838, the first was given, with a demonstration of the electric telegraphy by Samuel Morse and Alfred Vail at the Speedwell Ironworks, now a National Historic Landmark Museum, in Morristown, New Jersey. It was held over two miles of wire. For what it's worth, the Speedwell Ironworks contends the demonstration was on the 11th. There have been photos of a classroom at the Geological Cabinet at New York University where it was noted that a demonstration took place, listed as first, on January 24, 1838. In all actuality, the date does not really matter.

How the Invention Occurred and the Competition

Morse had been traveling and studying in Europe for three years prior to 1832 when on his return trip, he began having conversations with an expert on electromagnetism, Bostonian Charles Thomas Jackson. Jackson invited him to witness some of his experiments. Morse also began meeting with Joseph Henry, another scientist in the field from the Albany Academy in New York. He began to theorize that sending signals, electronic impulses, in binary code, over a single wire could be accomplished. Over the next four years while a professor at the University of the City of New York, Morse studied more about electricity and by 1837 had built a transmitter and receiver from an artist's canvas stretcher, ten miles of wire, and other items. Two colleagues, Leonard Gale and Alfred Vail, began to refine the telegraph.

However, there was a problem, ... competition. Professor Joseph Wheatstone and William Cooke, English scientists and inventors had both been working on a similar concept, albeit separately, since 1833 and 1836. In May 1837, they formed a partnership and patented their version of the electrical telegraph. Within a short time, they also had their first customer, the British railway company, the Great Western Railway, over twenty-one kilometers of telegraph wire.

Samuel Morse, however, never agreed that the competition made them the inventor of the Electro-Magnetic Telegraph. He contended that he was the sole and first. After his demonstration in January 1838, Morse traveled to Washington to seek federal support. It was not forthcoming. He traveled to Europe, and found out that he had competition, and that Cooke and Wheatstone had established priority there, even if he believed they had been second. A patent was eventually issued in the United States on June 20, 1840, number 1647A, for "Improvement in the Mode of Communicating Information by Signals by the Application of Electromagnetism."

For several years after his return to the United States, Samuel Morse plied the halls of Congress for support. He got initial backing from Maine Congressman Francis Ormand Jonathan Smith, perhaps the first time a private researcher had gotten such. However, it was not until his trip to Washington in December 1842 that Morse, after a demonstration of his telegraph through the halls of Congress, that he got true tangible appropriation and approval, thirty thousand dollars, to string a line from Washington to Baltimore along the thirty-eight mile right of way of the Baltimore and Ohio Railroad.

On May 1, 1844, a demonstration of this line took the country by storm, telegraphing the news of Henry Clay's Whig nomination for President from Baltimore to the Capitol. On May 24, 1844, the line was open for business, with the words, "What God Hath Wrought," being the first transmitted on that date from Morse in the Supreme Court to Vail in the Mont Clare railroad station in Baltimore.

The Magnetic Telegraph Company was formed in May 1845 by associates of Morse who purchased rights to Morse's patents, and they, along with rivals, built telegraph lines from the east coast cities of Boston, New York, Buffalo, and Philadelphia to the Mississippi River. Over twelve thousand miles of telegraph wire were completed by 1850. In 1850, the New York and Mississippi Valley Telegraph Company was formed, which became Western Union, and within eleven years, they would create the first transcontinental line across the United States.

And what about Morse code? Samuel Morse began developing the idea of his Morse code around 1837, with Alfred Vail adding to its versatility by including letters and characters to the system in 1840. The dots and dash system were first used, in effect, around 1844.

Samuel Morse Before the Telegraph

Morse was born in Charlestown, Massachusetts in 1791 to a Calvanist preacher. He was educated at Yale College, studying religion, math, and horses, graduating in 1810. Upon graduation, Samuel Morse pursued a career in painting, at first studying from 1811-1814 at the Royal Academy in London, returning to the United States on August 21, 1815. For the next ten years, Morse painted portraits, including former President John Adams, President James Monroe, and the Marquis de Lafayette, plus aristocracy in Charleston, South Carolina and New Haven, Connecticut. In 1826, Morse founded the National Academy of Design in New York. He was back in Europe for additional study from 1830 to 1832. 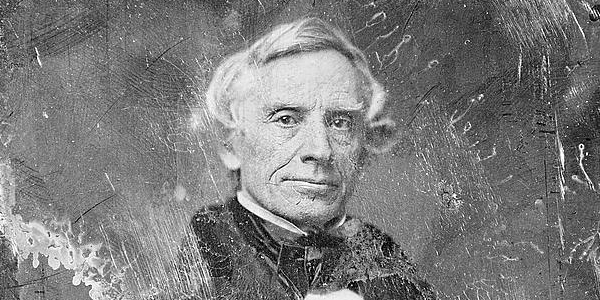