May 1, 1841 - Second Seminole War, ongoing since 1835, starts to wind down when Lieutenant William Tecumseh Sherman, escorts Seminole chieftain Coacoochee to meeting, leading to surrender of many of his band. By 1842, the few remaining Seminoles would be allowed to remain on an informal reservation in south Florida. 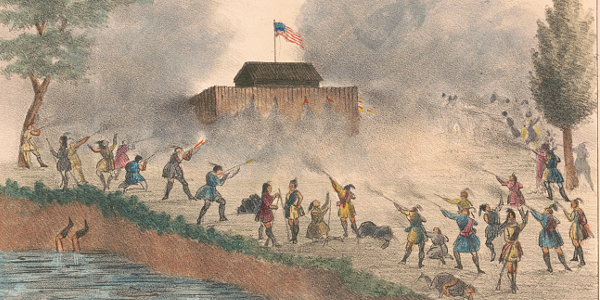 The action, this day, within the context of the entire Second Seminole War, may seem to be a small action, and we'll admit that the inclusion of William Tecumseh Sherman, whose twenty years later actions in the Civil War, including the Atlanta Campaign and march across states to Florida's north, may spur its interest. However, that seemingly small action, to escort chief Coacoochee to Fort Pierce to start negotiations with his band, was far from small in its impact. While only two hundred men would eventually surrender, it spoke of attrition. And attrition, in most wars, becomes a very important aspect to eventual defeat, whether that be in munitions, food, or men.

Sherman, still under command of controversial Brigadier General Walker Keith Armistead, who had replaced Zachary Taylor as head of Florida operations in May 1840, was ordered to escort Coacoochee to Fort Pierce. Coacoochee had been taking advantage of Armistead, who had become estranged from the territorial government due to his policy of focusing the federal response in the war to an area south of Fort King. Washington had authorized Armistead to offer bribes to Seminole chiefs in order to get them to surrender, then move west. Five thousand dollars was the amount usually used, although, at times, Armistead chose not to use the bribe, but purely insist that the chiefs accept the terms of the previously negotiated Payne's Treaty. Coacoochee noticed Armistead's willingness to negotiate, agreeing to bring in his band of two hundred in March 1841 within several months. During that time, the Seminole chief would appear at forts, demand food, liquor, and livestock, then leave.

With Armistead now tired of that ruse, he sent Sherman to bring Coacoochee in for a meeting. It was estimated at this time that no more than three hundred Seminole warriors were left in the territory, although that estimate, purported by Armistead, may be low. The meeting ended with the chief agreeing to a thirty day window to bring in his men for transportation west. The next thirty days saw Coacoochee appear at the fort again and again, but without his followers. Command of the Second Seminole War was removed from General Armistead on May 31, 1841; he was replaced by Colonel William Jenkins Worth. Four days later, subordinates decided that Coacoochee would renege on his agreement and arrested him, along with fifteen followers, shipping them to New Orleans. Before they could get there, new commander Worth ordered them returned to Tampa Bay.

Over the next months, Worth used Coacoochee as persuasion, coaxing the chief with eight thousand dollars to send messages to his followers to surrender. Two hundred and eleven agreed, while others were eventually captured for transportation west, with a few scattering into the swamps, avoiding detection.

Over the next year, various bands held sporadic firefights with the dragoons. On April 19, 1842, at Patelchikaha Swamp, about thirty miles south of Fort King, one of the last actions of the war occurred. It led Colonel Worth to a conclusion spurred by the nation's tire of the war; let the remaining members of the Seminoles live in peace. He received permission to allow them to live on an informal reservation in southwestern Florida. Worth declared the war over on August 14, 1842.

The Armed Occupation Act had passed Congress ten days earlier on August 4, 1842, authorizing and urging settlement in Florida with the offer of one hundred and sixty acres of free land. Over two hundred and ten thousand acres were claimed over the next two years.

How the Second Seminole War Began

The conclusion of the First Seminole War had not solved much. Conflict after the United States formally took over the territory from Spain in 1821 with the Adams-Onis Treaty was rising as settlers wished the government to rid the Florida territory of the Seminoles so they could migrate and live on the land in peace. By 1823, a treaty had been signed, the Treaty of Moultrie Creek, that established a reservation in the central part of the territory. It also allowed six villages to remain along the Apalachicola River.

For the most part, the tribe in the panhandle settled on the apportioned reservation, a fort, Fort King, was built in the area of today's Ocala, and for five years, 1827-1832, peace was achieved. In 1828, however, that had begun to slowly change. The territory of Florida and its residents were beginning to rethink the treaty, now wanting the Seminoles to move west and give up the reservation; they also wanted them to move west as Creeks and live on the Creek reservation. The Florida Seminoles did not think of themselves as part of the Creek tribe. Adding to the equation were two acts. Andrew Jackson, the Seminole nemesis from the First Seminole War, was elected President in 1828. The Indian Removal Act was passed by Congress in 1830, urging Indian relocation west of the Mississippi.

In 1832, the Seminoles were called to a meeting at Payne's Landing on the Oklawaha River. A treaty was negotiated to move the Seminole tribe west. On March 28, 1833, the Treaty of Payne's Landing, supposedly agreed to and signed by seven tribe chiefs, was approved. They stated that it had not been signed by them or they had been coerced into doing it. No matter, the Congress of the United States approved Payne's Treaty in 1834; the Seminoles had three years to get out. In October 1834, the Seminole chiefs informed the government that they had no intention to get out.

On Feburary 16, 1835, President Andrew Jackson had written them a letter. At Fort King, one hundred and fifty chiefs were congregated by Indian Agent Wiley Thompson and read its contents on March 27, 1835.

I am sorry to have heard that you have been listening to bad counsel. You know me, and you know that I would not deceive, nor advise you to do anything that was unjust or injurious. Open your ears and attend to what I shall now say to you. They are the words of a friend, and the words of truth.

The white people are settling around you. The game has disappeared from your country. Your people are poor and hungry. All this you have perceived for some time ...

My Children, I have never deceived, nor will I ever deceive any of the red people. I tell you that you must go, and that you will go. Even if you had a right to stay, how could you live where you are now? You have sold all your country. You have not a piece as larger as blanket to sit down upon. What is to support yourselves, your women, and children? The tract you have ceded will soon be surveyed and sold, and immediately afterwards will be occupied by a white population. You will soon be in a state of starvation. You will commit depredations upon the property of our citizens. You will be resisted, punished, perhaps killed. Now is it not better peaceably to remove to a fine, fertile country, occupied by your own kindred, and where game is yet abundant? The annuities payable to you, and the other stipulations made in your favor, will make your situation comfortable, and will enable you to increase and improve. If, therefore, you had a right to stay where you now are, still every true friend would advise you to remove. But you have no right to stay, and you must go. I am desirous that you should go peaceably and voluntarily. You shall be comfortably taken care of, and kindly treated on the road, and when you arrive in your new country, provisions will be issued to you for a year, so that you can have ample time to provide for your future support.

But lest some of your rash young men should forcibly oppose your arrangements for removal, I have ordered a large military force to be sent among you. I have directed the commanding officer, and likewise the agent, your friend, General Thompson, that every reasonable indulgence be held out to you. But I have also directed that one third of your people, as provided for in the treaty, be removed during the present season. If you listen to the voice of friendship and truth, you will go quietly and voluntarily. But should you listen to the bad birds that are always flying about you, and refuse to move, I have then directed the commanding officer to remove you by force. This will be done. I pray the Great Spirit, therefore, to incline you to do what is right.

Your Friend
A. Jackson

Example of Battles of the Second Seminole War

December 28, 1835 - At Black Point, a Seminole war party with black allies ambush Major Francis Dade and one hundred and eight soldiers; most perish in what would become known as the Dade Massacre. On the same day, Osceola, an inflential Seminole leader and warrior, kills President's Jackson's messenger, Territorial Indian Agent Wiley Thompson, outside Fort King.

December 31, 1835 - Battle of the Withlacoochee engages Seminole warriors under Osceola against U.S. Army under General Clinch and Florida militia. About sixty casualties. Outcome was Congress appropriating funds, $600,000, for an all-out war.

December 25, 1837 - Battle of Okeechobee between General Zachary Taylor and one thousand troopers versus a Seminole force of five hundred. Hailed as a victory for Taylor, although casulties higher for Federal troops.

January 15 and 24, 1838 - Battle of Loxahatchee was two separate engagements along the river near today's Jupiter, Florida. The larger battle on January 24 is considered the last major battle of the Second Seminole War, engaging fifteen hundred troops of General Thomas S. Jesup's force.

Image above: Attack of the Seminoles on the Block House, 1837, T.F. Gray and James. Courtesy Library of Congress. Below: Arrival of the South Carolina Dragoons at the Withlacoochee River during the Second Seminole War, 1837, T.F. Gray and James. Courtesy Library of Congress. Information Source: Almanac of American Military History; Library of Congress; United States Statutes at Large; President Andrew Jackson Asked Seminoles in Letter to Leave Florida," 1996, Jim Robison, Orlando Sentinel; "Jackson's letter to Seminoles," February 1835, courtesy Patriotpost.us; "The Age of Jackson and the Art of American Power, 1815-1848," By William Nester; History of the Second Seminole War 1835-1842, John K. Mahon; semtribe.com; Battle of the Withlacoochee Summary, The Battle of, vlp.cah.ucf.edu; Wikipedia Commons. 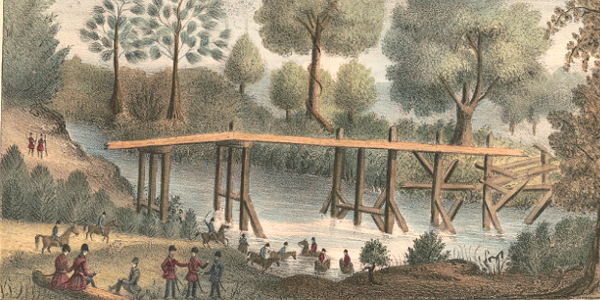