June 4, 1843 - The Black Horse Troop of the 1st United States Dragoons from Fort Scott, Kansas join a military escort into Indian Territory along the Santa Fe Trail and apprehend Jacob Snively and his Texas freebooters. 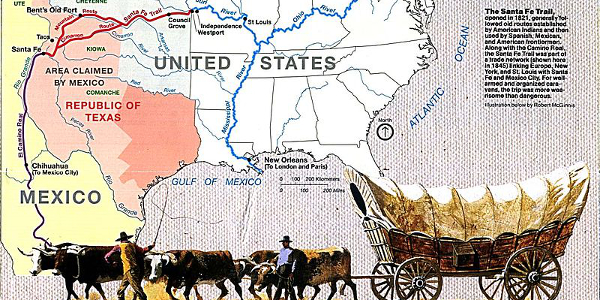 For over twenty years the Santa Fe Trail had been the interstate highway of the southwest, with troops, commerce, and nefarious traffic all plying the dirt between Missouri, Santa Fe, and with its adjunct the El Camino Road, into Mexico. Since 1792 and its founding by Pedro Vial, a French explorer, until 1821 when William Bicknell traversed the road from the Missouri River to establish trade, until 1843, and beyond, the trail and its environs was a battleground in the establishment of nations, states, and settlement.

There had been a dispute between the Republic of Texas, established in 1836, and Mexico, on who controlled the area around Santa Fe. In 1841, the Texas Santa Fe Expedition, a small military and trade group representing the Republic of Texas had ventured to Santa Fe to convince the people of New Mexico that their future would be better in the Republic on trade and political grounds. They were captured by the Mexican Army and tortured, then imprisoned in Mexico City. In 1842-3, the Warfield Expedition, under approval from Republic of Texas Governor Sam Houston, was tasked with a scheme to overthrow the Mexican governments in New Mexico and Chihuahua, giving the Republic of Texas part of the spoils if successful. It was not; partly because of the murder, supposedly unsanctioned, of the former Governor of Mexico's son. Both Mexican and United States citizens were outraged by the act and wanted a return to a stable transportation route and commerce.

With his ties and ears to the administration, Snively proposed on January 28, 1843, a retaliation for the Mexican raids against San Antonio and other actions against the Republic. On February 16, 1843, Colonel Snively was authorized by the Republic of Texas War Department to partake in a commission to intercept Mexican caravans on the Santa Fe Trail on lands claimed by Texas, with some similarities to the commission given to Warfield. He was also told, in no uncertain terms, not to violate the sovereignty of the United States.

Colonel Snively was instructed to raise his company of not more than three hundred soldiers from outside official circles in North Texas. Whatever they captured on the expedition would be divided between themselves and the government of Texas. By April 24, 1843, he had raised between one hundred and seventy and one hundred and ninety men. They called themselves the Battalion of Invincibles and would meet at Fort Johnson, a small fortification in Georgetown on the Red River. When New Mexico authorities heard of the Snively expedition heading into their territoy around May 1, General Armijo, ruling governor of the Province, started from Santa Fe to thwart the expedition. An advance group of New Mexico troops were sent forward toward the Arkansas River to protect the caravans. By this time, Colonel Snively had other allies; about twenty men under Colonel Warfield joined their group.

Snively's Expedition advanced along the Santa Fe Road to the sand hills south of the Arkansas River, reaching the Arkansas River on May 27. They met the advancing party of Mexicans, one hundred in number. On June 20, the skirmish took place, with victory to Snively and thirty-six casualties, twenty-three among them killed, among the Mexican troops. All but two were captured by Snively's men, ... those two returned to General Armijo's camp one hundred and forty miles away to report of Snively's movement.

What they hadn't considered was the implication that the United States, not the Republic of Texas or Mexico, also did not agree with those actions or the action of attacking these commercial caravans. The traders in the caravans that Snively was approaching not only contained Mexican citizens, but United States citizens as well, ... and they were being escorted by the Black Horse Troop.

Black Horse Troops to the Rescue

Philip St. George Cook was a graduate of the United States Military Academy in 1827 and after the end of the Black Hawk War, made first lieutenant, then captain and commander of the 1st United States Dragoons, who had been newly formed and send to explore, command, and keep peace, in the United States far west. There were two hundred soldiers in the Dragoons under his command. The United States was getting tired of the trouble on the Santa Fe trail between their two southern neighbors, the Republic of Texas and Mexico. They wanted to protect the commerce and their citizens engaged in it, whether they were trading with Republic of Texas or Mexican citizens. When they heard of the Snively Expedition, the Black Horse Troop of the Dragoons, was sent to escort some of the caravans to the edge of the disputed territory, the Arkansas River.

On June 30, 1843, the Dragoons surrounded and captured Snively's men (now less in number after the departure of around seventy members) for encroaching on United States territory and killing a Mexican citizen. Snively himself, upon meeting with Cook and disagreeing that he was in United States territory, was captured, a disputed act itself as the Republic of Texas was a friendly nation to the United States. Snively's men, as well as the colonel, were eventually released. Some of Snively's expedition, around seventy in number, elected Warfield as captain and pursued the caravan, now without U.S. escort, into disputed Mexican Texas territory. They did not attempt to engage them, as their force was now small in number compared to General Armijo's troops they would be approaching.

Note: Varying dates are attributed to the actual capture by Cook of the Snively party, from June 30, 1843 to July 15, 1843. The June 30 date, at this time, seems the most likely to us, but we must admit that it seems a disputed date.

Photo above: Map of the Santa Fe Trail. Courtesy National Park Service. Below: Lithograph of the Arrival of the Caravan at Santa Fe, 1844. Courtesy Wikipedia Commons via the New Mexico History Museum. Info Source: "Early Western Travels, 1748-1846: A Series of Annotated Reprints of Some of the Best and Rarest Contemporary Volumes of Travel, Descriptive of the Aborigines and Social and Economic Conditions in the Middle and Far West, During the Period of Early American Settlement, Volume 20," 1905, Reuben Gold Thwaites; "Snively Expedition," 2010, H. Bailey Carroll, Texas State Historical Associaiton; Wikipedia Commons. 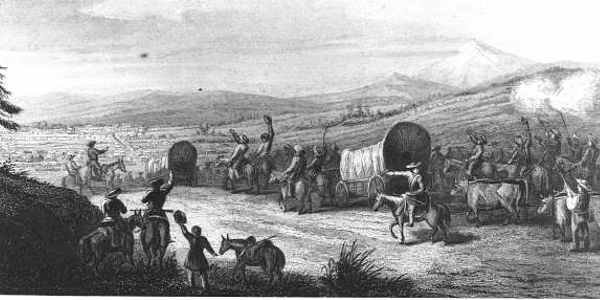