It had been an independent republic since it declared its independence from Mexico of March 2, 1936, but Texas was still in limbo. Limbo because Mexico did not recognize that independence and that the United States of America, to its east and north was coming calling, at least some factions of it depending on what side of the pro or anti-slavery movement you were on since Texas was a slave state. Most of Texas wanted to be part of the USA; some of the USA did not want a war with Mexico and approached the annexation cautiously.

There were a variety of ways this could go. Sam Houston, the Republic of Texas President, had meetings with the Mexican government about recognizing their nation. John Tyler, President of the United States, wanted to bring Texas into the Union as a base for another term in office. By 1844, Tyler had a treaty that would lead to annexation, but in June, the Senate rejected it. By the time of the election in November, Tyler was a lame duck, not supported by any major party, and tried again with a compromise version of the bill. This time, giving incoming President James Polk the choice, both houses of Congress passed the bill; 27-25 in the Senate; 132 to 76 in the House of Representatives. Two days before leaving office, Tyler signed the bill on March 1, 1845. Texas ratified it.

Who Owned Texas Through the Years

1821 to 1836 - Mexican Texas: A northern province of Mexico since that state won its independence from Spain, joined with the province of Coahuila in 1824. Only 3,500 settlers lived in Spanish Texas in 1821.

1836 to 1846 - Republic of Texas: Independent nation since surrender of Santa Ana and their declaration of independence on April 21, 1836, which Mexico did not recognize. Annexed by the United States in 1845, with formal transfer on February 19, 1846.

Annexation of Texas. Joint Resolution of the Congress of the United States, March 1, 1845.

Begun and held at the city of Washington, in the District of Columbia, on Monday the second day of December, eighteen hundred and forty-four.

Joint Resolution for annexing Texas to the United States.

Resolved by the Senate and House of Representatives of the United States of America in Congress assembled, That Congress doth consent that the territory properly included within, and rightfully belonging to the Republic of Texas, may be erected into a new state, to be called the state of Texas, with a republican form of government, to be adopted by the people of said republic, by deputies in Convention assembled, with the consent of the existing government, in order that the same may be admitted as one of the states of this Union.

2. And be it further resolved, That the foregoing consent of Congress is given upon the following conditions, and with the following guarantees, to wit: First-said state to be formed, subject to the adjustment by this government of all questions of boundary that may arise with other governments; and the constitution thereof, with the proper evidence of its adoption by the people of said republic of Texas, shall be transmitted to the President of the United States, to be laid before Congress for its final action, on or before the first day of January, one thousand eight hundred and forty-six. Second-said state, when admitted into the Union, after ceding to the United States all public edifices, fortifications, barracks, ports and harbors, navy and navy-yards, docks, magazines, arms, armaments, and all other property and means pertaining to the public defence belonging to said republic of Texas, shall retain all the public funds, debts, taxes, and dues of every kind which may belong to or be due and owing said republic; and shall also retain all the vacant and unappropriated lands lying within its limits, to be applied to the payment of the debts and liabilities of said republic of Texas; and the residue of said lands, after discharging said debts and liabilities, to be disposed of as said state may direct; but in no event are said debts and liabilities to become a charge upon the government of the United States. Third- New states, of convenient size, not exceeding four in number, in addition to said state of Texas, and having sufficient population, may hereafter, by the consent of said state, be formed out of the territory thereof, which shall be entitled to admission under the provisions of the federal constitution. And such states as may be formed out of that portion of said territory lying south of thirty-six degrees thirty minutes north latitude, commonly known as the Missouri compromise line, shall be admitted into the Union with or without slavery, as the people of each state asking admission may desire. And in such state or states as shall be formed out of said territory north of said Missouri compromise line, slavery, or involuntary servitude, (except for crime,) shall be prohibited.

3. And be it further resolved, That if the President of the United States shall in his judgment and discretion deem it most advisable, instead of proceeding to submit the foregoing resolution to the Republic of Texas, as an overture on the part of the United States for admission, to negotiate with that Republic; then, Be it resolved, that a state, to be formed out of the present Republic of Texas, with suitable extent and boundaries, and with two representatives in Congress, until the next apportionment of representation, shall be admitted into the Union, by virtue of this act, on an equal footing with the existing states, as soon as the terms and conditions of such admission, and the cession of the remaining Texan territory to the United States shall be agreed upon by the governments of Texas and the United States: And that the sum of one hundred thousand dollars be, and the same is hereby, appropriated to defray the expenses of missions and negotiations, to agree upon the terms of said admission and cession, either by treaty to be submitted to the Senate, or by articles to be submitted to the two Houses of Congress, as the President may direct.

Photo above: Painting by Percy Moran, 1912, reflects the intensity of the battle of the Alamo. Photo courtesy of the Library of Congress Photographs and Prints. Photo Below: Mission San Juan de Capistrano, circa 1936, from the Historic American Buildings Survey, courtesy Library of Congress. Information Source: Treaties and Other International Acts of the United States of America. Edited by Hunter Miller Volume 4, Documents 80-121 : 1836-1846, Washington : Government Printing Office, 1934 via the Avalan Project, Yale Law School, other information Texas State Library and Archives Commission, Wikipedia Commons. 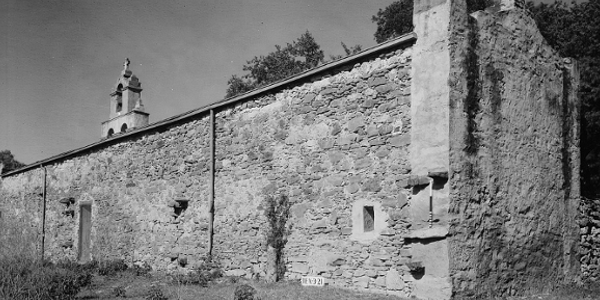