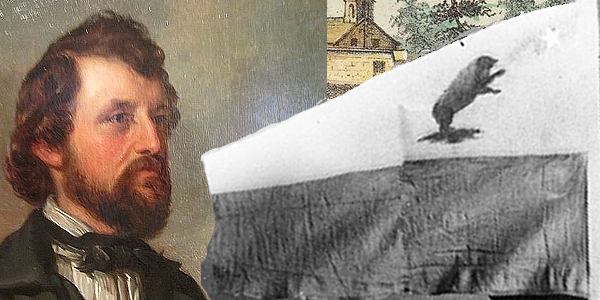 It would only last for twenty-five days, that Republic of California, before they would join up with the expanding United States. But for those days of June and July in 1846, the counties of what today would be northern California were in rebellion against Mexico, and desired to be independent. So they declared themselves that, thirty-three immigrants in total at one time, twenty-four during the proclamation, while the United States battled the first conflicts of the Mexican American War, which had begun on April 25, 1846.

A faction of immigrants in the province of Mexico's Alta California had become increasingly disenchanted with Mexican rule, and desired to be free. They had been prevented from buying or renting land, because they had entered the territory without official permission. Mexican officials had been preventing Americans (more like discouraging) from entering Alta California due to concern about trouble there, like that with the Republic of Texas, now a state as of 1845. Outside that limited group, the territory had been neglected by Mexican authorities since their independence twenty-five years earlier, and there was often discussion about becoming a Republic or allowing annexation to France, Great Britain, or the United States.

When the Commandante General of Alta California, Jose Castro, met with the immigrants at Sonoma and Sutter's Fort in November 1845, he gave them three months permission to remain, with adjudication of their status upcoming. They might be asked to leave then. John C. Fremont, a U.S. Army Captain, had been exploring the region with a sixty-two man contingent since late 1845 as well. He knew of the expansionist policies of President Polk, but remained neutral in the immigrant dispute with war with Mexico still upcoming. The USS Portsmouth was sent to San Francisco to protect the American citizens in Alta California if need arose. By June 8, with the Mexican War now declared in May, but unknown by those in Alta California, Fremont met with leaders of the revolt, including William Ide, but had no specific plan of action for independence or annexation.

On June 10, 1846, members of the group confiscated one hundred and seventy horses owned by the Mexican Army en route to Juan Castro in Santa Clara. They took the siezed horses to Fremont's camp, and within four days, thirty insurgents had siezed the pueblo at Sonoma, refusing terms from Mexican Lieutenant Colonel Mariano Guadalupe Vallejo. They discussed forming a new republic. The majority agreed, raising the Bear Flag, and calling themselves Los Osos, the Bears. On June 14-15, 1846, given the role of Commander by the formed four departments of government, William Ide wrote his proclamation, effectively declaring the Republic of California. There were twenty-four men within the compound of the Sonoma Barracks, with forty-eight citizens of the area gathered there as well to protect them. A letter was also sent to Commodore Stockton at San Francisco Bay, giving notice to the United States Government that the Republic of California had been born. It reached Captain Montgomery of the USS Portsmouth on June 16; he did not yet know that war with Mexico had been officially approved by Congress.

Commandante Castro was not pleased and began to prepare to battle the new Republic. A small battle ensued at Olumpali between seventy government militia and under twenty of the Los Osos Bears on June 20. John C. Fremont responded with ninety men on June 23, arriving in Sonoma two days later. He wrote a letter resigning from the Army, in case the United States disapproved of his actions. Fremont commanded his forces toward San Rafael, then Yerba Buena (San Francisco) over the next week. On July 5, Fremont proposed that the Bears and his forces form a joint California Battalion with him as leader. By July 7, the U.S. Navy captured Monterey with two hundred and twenty-five men storming the beach, declaring that California was now part of the United States. A representative from the USS Portsmouth arrived again at Sonoma on July 9 with two United States flags; one for Sonoma and one for Sutter's Fort.

Some historians dispute the fact that the Republic of California was ever an independent nation. It did not, in reality, have the trappings of a formal government, even though the immigrant Bears had begun four divisions and started to prepare treaties. The lack of formality and recognition, as well as time, seems to agree with that contention. Unlike the Republic of Texas who had governed for ten years before becoming a state of the United States, Alta California, i.e. the Republic of California, may more readily be thought of as a region in rebellion within the context of the Mexican War, even though the participants in Los Osos, or Fremont himself, did not know that the war had been officially declared.

To all persons, citizens of Sonoma, requesting them to remain at peace, and to follow their rightful occupations without fear of molestation.

The Commander in Chief of the Troops assembled at the Fortress of Sonoma gives his inviolable pledge to all persons in California not found under arms that they shall not be disturbed in their persons, their property or social relations one to another by men under his command.

He also solemnly declares his object to be First, to defend himself and companions in arms who were invited to this country by a promise of Lands on which to settle themselves and families who were also promised a "republican government," who, when having arrived in California were denied even the privilege of buying or renting Lands of their friends, who instead of being allowed to participate in or being protected by a "Republican Government" were oppressed by a "Military Despotism," who were even threatened, by "Proclamation" from the Chief Officer of the aforesaid Despotism, with extermination if they would not depart out of the Country, leaving all of their property, their arms and beasts of burden, and thus deprived of the means of flight or defense. We were to be driven through deserts, inhabited by hostile Indians to certain destruction. To overthrow a Government which has seized upon the property of the Missions for its individual aggrandizement; which has ruined and shamefully oppressed the laboring people of California, by their enormous exactions on goods imported into this country; is the determined purpose of the brave men who are associated under his command.

He also solemnly declares his object in the Second place to be to invite all peaceable and good Citizens of California who are friendly to the maintenance of good order and equal rights (and I do hereby invite them to repair to my camp at Sonoma without delay) to assist us in establishing and perpetuating a "Republican Government" which shall secure to all: civil and religious liberty; which shall detect and punish crime; which shall encourage industry, virtue and literature; which shall leave unshackled by Fetters, Commerce, Agriculture, and Mechanism.

He further declares that he relies upon the rectitude of our intentions; the favor of Heaven and the bravery of those who are bound to and associated with him, by the principle of self preservation; by the love of truth; and by the hatred of tyranny for his hopes of success.

He further declares that he believes that a Government to be prosperous and happyfying [sic] in its tendency must originate with its people who are friendly to its existence. That its Citizens are its Guardians, its officers are its Servants, and its Glory their reward. 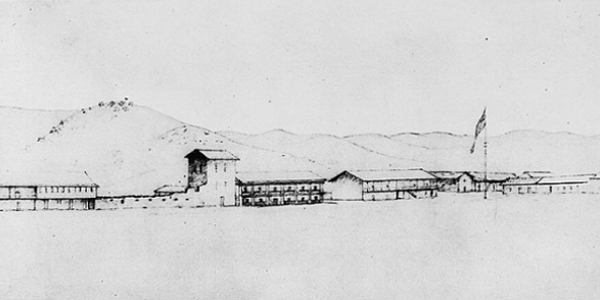