The strategy of the United States in their conflict with Mexico had been apparent from even before its start. President Polk, Secretary of War W.L. Marcy, and other politicians were clear. They had a plan for manifest destiny and expansion of United States territory and the desires of the combative regime south of the border was not going to stop them. So, in 1845, they agreed to the annexation of the Republic of Texas into the United States, adding it directly into the Union as a state in December even though Mexico warned of war if that occurred. While that act did not cause Mexico to engage in combat, when Texas militia moved into disputed territory near the Rio Grande River, diplomatic relations were broken. With the initial actions of conflict engaged by Mexico in the spring of 1846, the President and Secretary of War had made their orders known to General Kearny and the Army of the West that they were to take New Mexico and California from Mexican hands.

For General Winfield Scott, the Mexican American War was an extension of an already broad and stellar military career. He had been in the United States Army since 1814, serving in the War of 1812, and by 1847, was sixty years old and the 3rd Commanding General of the United States Army, a position crafted after George Washington had been Commander-In-Chief of the Continental Army in the American Revolution. He had been in that position for five years before the Mexican War started, and despite a contentious relationship with President Polk, they had been in agreement that the strategy here was to take Alta California and then seek peace with Mexico. Zachary Taylor would lead the U.S. Army into Mexico; Scott would remain in Washington.

By 1847, the strategy began to change. Polk, Marcy, and Scott now thought that Mexico would not surrender if the United States only remained in possession of Northern Mexico. They would have to invade, taking Mexican territory even further south than that already won by Kearny and Zachary Taylor. Scott would leave his administrative post and go back into the field; the goal was to capture Mexico City. Veracruz, a port on the Gulf of Mexico, would be the start. The national road led two hundred miles from that city to Mexico City and would be an important access way for the twelve thousand man U.S. Army on their march to capture it. A naval invasion and siege was planned, the largest assault of its kind in history up to that point, and the largest until the North African campaign of World War II.

Scott would land a twelve thousand man force on March 9, 1847, including men who would become even more famous in the war to come, the Civil War. Robert E. Lee, George Meade, U.S. Grant, and George B. McClellan were only a few of those within the command structure of the invasion who would serve in even higher capacity during the War of Rebellion. Commodore David Conner would lead the amphibious portion of the attack. General Winfield Scott would command the land forces in an encircling motion around the city and lay siege to the town for nearly three weeks.

Elements of the Siege

Veracruz was well defended, and intelligence reports had warned the Mexican forces that an attack was to come. Three forts were critical to its defense; Fort Santiago, Fort Concepcio'n, and Fort San Juan de Ulu'a. In total, over four thousand men were garrisoned in those locations. They commanded two hundred and twenty-four guns.

General Scott and Commodore Connor landed their forces at Collado Beach, three miles south of town, on March 9. Not one man was lost of the twelve thousand upon the landing. Once ashore, the divisions dispersed to envelope the city. Patterson, commanding the 3rd Volunteer Division, marched north. Major General William J. Worth, commanding the 1st Division, and Major General David E. Twiggs, commanding the 2nd Division, plus the Dragoon brigade filled what would become a seven mile line stretching from Collado Beach to Playa Vergara within four days. A naval battery was constructed under the direction of Captain Robert E. Lee. Seven ships had been part of the invasion, including the flagship USS Raritan, USS Mississippi, USS Potomac, USS St. Mary's, USS Petrita, USS Massachusetts, USS Ohio, and the Mosquito fleet.

News Reports of the Landing

By Express from Philadelphia we have received a copy of the Philadelphia North American, containing the following important intelligence from Vera Cruz:

By the schr. Portia, at New Orleans, from Sacrificios, the 15th, we have news of interest from the land and naval forces cooperating before Vera Cruz. The Delta's account says troops were landed by Generals Scott, Patterson, Worth, Pillow, Quitman and Twiggs with the Aids and the Topographical corps, which approached near the shore, toward the direction of the Castle, the guns of San Juan de Ulua opening fire upon the party, throwing shell and round-shot but without doing any damage to the reconnoitering party - the round shot either passing over or falling short, and the shell, although thrown with precision, bursting at a considerable elevation, doing no harm - one shell passing over the steamer Petrita, (the vessel employed in the reconnoisance) and another bursting under her bow, without doing her any injury.

The reconnoisanc was made while the transports and convoys were lying off at Anton Lizardo after their return and the least possible delay, transports and convoys weighed anchor and stood to the southward of Sacrificios, bearing in toward the main land, with a fair breeze and in gallant style, when they came to anchor, the convoys taking position in such a manner as to protect the disembarkation of the troops - the first 6,000 being landed at 2 o'clock P.M. on the 9th, and the remainder during the next day. The landing is spoken of, by persons who were eye witnesses, at a scene (sp) of magnificence rarely witnessed more than once in a lifetime. The troops amounted to the exact number of 12,100.

After the landing, the different columns took up their line of march for the positions assigned to them in the important action and siege of Vera Cruz.

The steamers Vixen and Spitfire, laying under Punta de Hornos, opened on the City across the point and in the direction of the Castle, with shell and round shot, which was returned by the Castle, but without effect.

General Worth's division which it is said has been assigned to the operations of the left flank of the City, from the localis of the landing on the South, and under Punta de Hornos, had necessarily to move in echelon to the rear past the right, in order to gain his proper position - in the execution of which, it became necessary to attack and take possession of two redoubts thrown up by the enemy on one of which was a piece of artillery, and both filled with infantry.

The redoubts were attacked, charged and taken, a spirited resistance being made by the enemy who lost several in killed, wounded and prisoners - our loss some seven killed and several wounded. Capt. Alburtis of the 2nd Infantry, was killed by a round-shot supposod to be from the Castle, the same shot taking off the arm of a drummer (a boy) and wounding a private. Capt. Alburtis was a Virginian, and formerly conducted a newspaper in Fredericksburg. Col. Dixon was wounded in the breast by a musket-shot.

The skirmishing was, however, no check to the advancing column, which passed steadily forward to its position on the left and rear of the city, where it halted and commenced the work of intrenchment.

The pipes used for the purpose of supplying the city with fresh water have been discovered and broken up, completely cutting off the supply from the tanks, which are situated some distance from the city.

During the advance upon the rear of the city, Passed Midshipman Rogers, who had not yet been sent from Vera Cruz, was bound upon a cart, and ordered to be conveyed under a guard, to the prison at Perote, but fortunately they were encountered by our forces, and Mr. Rogers was rescued and is now on board his ship.

The city is now completely surrounded by our troops, each division having taken a strong and advantageous position with intrenchments completely cutting off all communication by sea or land, and at the same time are safe from the fire of the Castle. The positions of divisions were established on the 15th, extending from Punta de Hornos, on the right, to Punta de la Catita, on the left, in one unbroken line, and active preparations were on foot for the immediate subjugation of this formidable place.

So closely is Vera Cruz now besieged, and as entirely are every means of communication cut off, that in a very few days the news must reach us that both the City and Castle are occupied by our victorious troops. ...

On March 22, Scott sought the Mexican Army's surrender; Brigadier General Juan Esteban Morales, commander, declined. Scott responed to the denial by ordering a bombardment to begin at 4:15 p.m. At 6:00 p.m. the offshore naval guns joined in from the steamers Spitfire and Vixon, plus five schooners. Fort Santiago was abandoned and many civilian structures in Veracruz were damanged. The bombardment continued on the 23rd of March, with the naval battery under Lee now mounted and participating by the 24th. The previous two days of bombardment impacted the city walls and those of the fort, causing some of the Mexican gunners to abandon their positions. Scott planned an assault for March 25 as a Mexican Council of War debated safe passage for consuls, women, and children as first terms, offering it to Scott. He refused; complete surrender were the only terms. Morales resigned as the surrender was approved on March 26. Terms were agreed upon late on March 26; some sources state the next day. By March 29, the United States flag flew over the ramparts of San Juan de Ulu'a. General Winfield Scott and U.S. forces would push toward Mexico City over the next six months before the fall of Mexico City in September.

Casualties are estimated at two hundred to one thousand for Mexican troops and civilians. American casualties were sixty-eight killed and wounded. 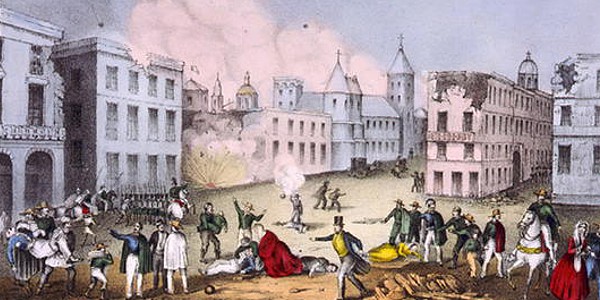