February 28, 1849 - With the arrival of the SS California in San Francisco after a four month twenty-one day journey around the Cape Horn from New York City, regular steamboat service is inaugurated between the east and west coasts. 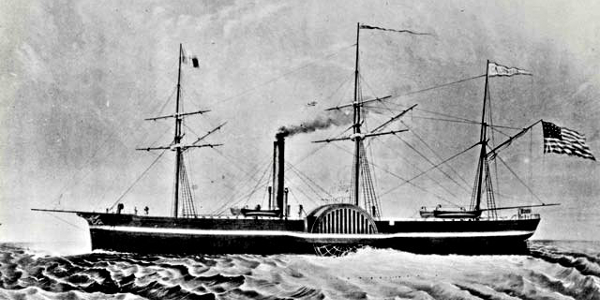 Well, first let's quell a misconception that may be assumed due to the date of its inaugural service. No, the service to get passengers from the east to west coast in 1849 did not start because of the California Gold Rush, but, boy, did that Sutter's Mill discovery certainly make it popular. The conception and inception of the service from New York and East Coast cities to San Francisco and California was a government thought. Well, at least it was a mail service thought.

A government mail contract had been let. It specified that the Pacific Mail Steamship Company, founded in 1848 by New York merchants, would provide regular mail, freight, and passenger service from Panama to San Francisco and Oregon every three weeks. They would build three ships. The contract for the mail service cost $199,000. The cost of constructing the SS California steamship was $200,082. She was the first of the three ships built. At one hundred and ninety-nine feet long and with a capacity for over 1,000 gross tons and two hundred and ten passengers, her maiden voyage to California began on October 6, 1848. Word of the California Gold Rush had been reported by some newspapers in August to East Coast readers, but proof was not yet available. On December 5, proof was announced by President Polk in his State of the Union speech with a verified $3,000 in gold now deposited at the War Department.

When the ship left New York, most of the passengers were not heading all the way to California. As word of gold spread across North and South America, the SS California began to pick up more and more passengers on her journey around the Cape. By the time they reached Chile, almost all of the berths were filled. But more and more passengers with incentives from Polk's news raced to Panama to board the ship. When the SS California left Panama City on January 17, 1849, she had over three hundred and sixty passengers, filling the ship to the brim. It is estimated that over seven hundred and wanted passage. One month later, on February 28, 1849, she reached San Francisco to cheers from shore, and what essentially was supposed to be an inaugural mail run from New York to San Francisco had turned into the gold rush. Among her passengers was General Persifor F. Smith, the new military commander of the territory, Arthur Breeze Stout, the ship doctor, Augustus Bowie, a Navy surgeon, General William H. Pratt, its own captain C. Forbes, and four missionaries; Rev. O.C. Wheeler, Rev. S. Woodbridge, Rev. J.W. Douglass, and the Rev. S.H. Wiley.

First, the passengers debarked, and an introductory cruise given to San Francisco elite along the coast. Soon, most of the crew abandoned her, choosing to try their hand at gold prosperity. It took until May for the SS California to hire a new crew and head back to Panama with the mail. The mail contract was meant for use between Panama City and San Francisco and not all the way back to New York. Most passengers and cargo would thereafter take another ship to Panama, cross the Isthmus by mule and canoe, then take one of the three ships, and soon others, up to California. By the end of May, over four thousand fortune hunters had traveled on fifty-nine ships to San Francisco. The second of the Pacific Mail steamships to enter service was the SS Oregon on December 8, 1848; the third was the SS Panama on February 8, 1849. But with the demand caused by gold fever, three were not nearly enough. Ten more steamers were built and put into service on the Panama City to San Francisco route. By the end of the Gold Rush in 1855, more than three hundred thousand people had immigrated into the state from the United States and abroad.

What Happened to the SS California

The initial ship was used for the Panama City to San Francisco mail, cargo, and passenger route from the first voyage in 1848 until 1855. Larger ships were, by then, put into service, and she was shuttled into being a spare steamer the next year. In 1875, the engine was removed and the SS California lost its steam, reverting into a sailing ship to haul coal and lumber. Twenty years later, the ship sank off the coast of Peru.