January 1, 1880 - The construction of the Panama Canal begins under French auspices, although it would eventually fail on the sea level canal in 1893, and would be bought out by the United States twenty-four years later under President Theodore Roosevelt. There had been a desire for centuries to find a way over the territory of Central America in a faster manner to avoid the overland excursion or the even longer ocean trip around the tip of South America. The first idea had occurred during the reign of King Charles V of Spain in the early 16th century when he desired for faster passage for his ships from Spain to Peru. He ordered a survey by the Panama governor along the Chagres River, but after the survey's completion, the governor determined the feat impossible to accomplish at the time. By the middle of the 17th century, the suggestions were beginning to focus on the isthmus of Panama. However, it would take another century for those ideas to gain further steam. Suggestions by Thomas Jefferson, then minister to France, in 1788, that Spain should build it, as they controlled the territory of its proposed construction, was one. However, the Spanish Empire imploded prior to that idea coming to fruition, and the territory that was once theirs in Latin America and the ideal location for such a canal was no longer in their control.

With the discovery of gold in California at Sutter's Mill in 1848, the need for a canal escalated. Use of the Panama Railroad across the isthmus to take prospectors to ships awaiting them on the Pacific side heightened interest in the United States to the possibilities of construction. Twenty years would pass before Presidential authority, i.e. President Grant in 1869, began to survey the possibilities, not only in Panama, but in Mexico, Columbia, and Nicaragua. The survey for Panama would identify nearly the exact location of the eventual canal, fifty miles wide through mountains and tropical rain forest, but the Interoceanic Canal Commission favored the Nicaragua route.

In 1877, a second exploration of a projected canal route was undertaken by French Navy Lieutenant Lucien N.B. Wyse at the request of Ferdinand de Lesseps. Two routes were explored, including the sea level route from Limon Bay to Panama City, the current route. It would require a tunnel through the Continental Divide, 7,720 meter long. The French commission headed by de Lesseps chose that route, and negotiated a treaty with the Columbian government on March 20, 1878 that would give the French control of the canal for ninety-nine years after construction before reverting back to Columbian control without compensation.

On May 15, 1879, a Congress was held to debate the fourteen proposals and foster financial backing. Baron Godin de L&eacutepinay, an engineer for the French Department of Bridges and Highways suggested a lock system. Aniceto Garcia Menocal represented the American proposal for a Nicaragua based canal. However, de Lesseps, had, even prior to the Congress, already chosen the concept of Wyse for a sea level canal. The lock system got little consideration. On May 23, 1879, de Lesseps called a general session of the Congress, and gave a speech denoting his preference for the sea level canal along the route of the already established Panama railroad. The Technical Committee debated his suggestions, half walking out prior to their vote. The resolution would eventually pass that committee as well as the general session 74-8. Among those voting against it; Baron Godin de L&eacutepinay and Gustave Eiffel.

"The Congress believes that the escavation of an interoceanic canal at sea-level, so desirable in the interests of commerce and navigation, is feasible; and that, in order to take advantage of the indispensible facilities for access and operation which a channel of this kind must offer above all, this canal should extend from the Gulf of Limon to the Bay of Panama."

On January 1, 1880, the ceremony to signify its first construction was held; however, due to difficulties with the engineering and preparation, the first phase did not begin actual construction until March 12, 1881. de Lesseps, a diplomat and not an engineer, had underestimated the difficulties from the start. His commission had thought there would be little difficulty cutting through the Continental Divide and that the entire project would take eight years. However, Panama had a sparse population, making it difficult to hire the amount of men needed for the work, and the thick jungle made moving equipment and material slow. Purchase of the Panama Railroad by de Lesseps and company in August 1881 should have helped more than it did, however, its purchase price, at $25 million, was one third of the company resources, and had other financial implications.

As construction continued through 1884, a total of nineteen thousand men were employed on the project, although attrition, due to yellow fever and malaria, as well as mud slides from the climate's rainfall, continued to cause problems that put the project in jeopardy. By 1885, only one tenth of the estimated excavation had been accomplished.

By 1888, it had become apparent that a purely sea level canal was not the solution. Work on a lock canal, while allowing the possibility of a sea level canal in the future, began on January 15, 1888. Gustave Eiffel would construct the locks on a water channel with a sixty-one foot bottom width. But by 1889, there was no money left after de Lesseps failed to garner a new round of financing, and the project ceased. Ferdinand de Lesseps and other company officials were indicted on fraud and bribery charges and found guilty.

Now fifteen years after the start of the eight year estimated project, Wyse, in 1893, negotiated a ten year extension to their contract, which was accomplished on October 20, 1894 with the establishment of a new Panama Canal Company. But the new company had insufficient working capital, $12,000,000, to see the project through completion. Their new plan, a lock canal with two high level lakes, would not be accomplished by them, although it would serve as the basis for the eventual canal built to the United States and opened in 1914.

Sale to the United States

Although the new French company had intended to build the canal, it had become apparent by 1898 that they had insufficient funds to finish it. Their choice was to abandon the project altogether or sell. They met with President William McKinley on December 2, 1899. He established the United States Isthmian Canal Commission (1899-1902); they still favored the Nicaraguan route as did the House of Representatives. However, with President Roosevelt now in office in 1902, he called the commission to reverse its vote. Roosevelt wanted to take the French company's offer, newly proposed, to buy the Panama route for $40 million. On June 19, 1902, the U.S. Senate agreed. However, Colombia did not. They rejected the proposed treaty, Hay-Herran. 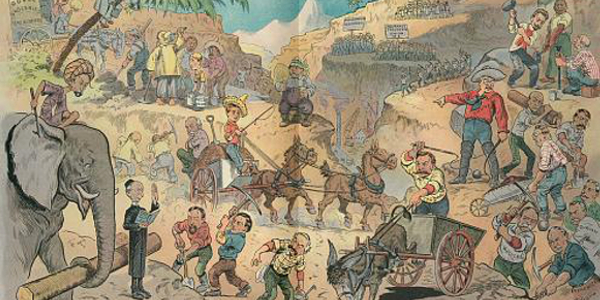