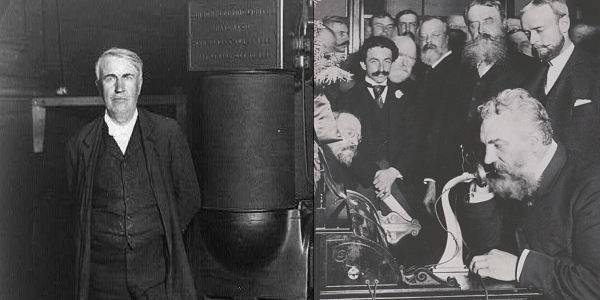 They had been running in the same tech circles for more than a decade, exhibiting their wares (Bell with the telephone and Edison with the megaphone and phonograph) at events such as the Philadelphia Centennial Exhibition of 1876 where their exhibits sidled just down the halls of Machinery Hall from each other. Bell demonstrated his voice through wires technology on opposite ends of Machinery Hall with Edison showing a variety of wares beyond the two above, an electric pen and automated telegraph system among them. Within five years of that event, it was time for cooperation, so Edison and Bell, with the Oriental Bell Telephone Company of New York and the Anglo-Indian Telephone Company would form a venture. The rest of the world needed phones. Their new company would be licensed to sell them to Greece, Turkey, Japan, China, and more of the Pacific Rim nations of Asia. Were some of those bonds formed in the halls of the Centennial? Perhaps. It would not seem a stretch.

Edison Five Years After the Centennial

The year 1876 was a big one for Edison beyond his exhibit at the Centennial. He had sold his quadraplex telephone system for twice what he thought it was worth ($10,000 versus $5,000) to Western Union, allowing him the funds to build his research facility at Menlo Park, New Jersey. Once established, Edison's work, with research scientists hired by Edison, continued in a variety of directions, including the incandescent light bulb. By the 1880's, they were producing 50,000 lamps per year.

Edison's work on the phonograph had given him his first taste of large fame. Although his concepts for the phonograph had been exhibited at Philadelphia in 1876, two years later Edison had become a celebrity based on his tinfoil and cylinder invention. When he exhibited the device in Washington, D.C. to Senators and U.S. President Rutherford B. Hayes in April 1878, he was desscribed by the Washington Post as a genius.

At this same time, Edison developed a better microphone, the carbon microphone, selling it for use in telephones to Western Union.

Edison began to think about the more commercial side of his tech enterprise in the late 1870's, forming Edison Electric Light Company, a New York City firm, in 1878, with financing from J.P. Morgan and the Vanderbilt family. With this firm, Edison began implementing the incandescent light system; the first on Henry Villard's steamer Columbia in May 1880.

Bell Five Years After the Centennial

On March 7, 1876, Alexander Graham Bell was issued a patent for the first telephone, even though he had not yet gotten the design to work. Three days later he called to assistant Thomas Watson, "Mr. Watson, Come Here, I Want to See You" testing the device. It worked. Three months later, Bell was showing the world his new telephone in Machinery Hall, first demonstration on June 25, 1876, but it wasn't the big hit of the Centennial Exhibition. That went to the Corliss Engine.

Through the Centennial year, Bell continued to test his telephone device over greater distances. On August 3 and 4, 1876, the tests began. On a four mile stretch of wire temporarily strung from Bell's home to Brantford, Ontario, voices were heard on the second day. Bell, with his additional success, approached Western Union attempting to sell his patent for $100,000. Western Union thought the telephone was insignificant and the price too high. Two years later the President of Western Union admitted that the patent was worth $25 million. At this point, Bell was unwilling to sell.

Despite not being the biggest hit at the time of the Centennial Exhibition, the telephone's introduction there gained influential fans, including the Emperor, Pedro II, of Brazil, and Queen Victoria, whom he gave a private demonstration at her Isle of Wright home.

Bell Telephone Company was established in 1877. Within one decade, one hundred and fifty thousand telephones had been sold in the United States alone. In 1879, Bell's firm bought Edison's patents for the carbon microphone from Western Union.