March 22, 1882 - The practice of polygamy is outlawed by legislation in the United States Congress. 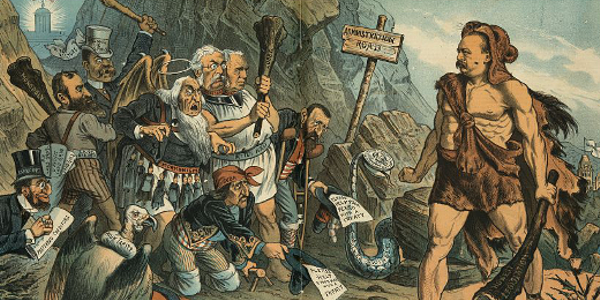 The President, Chester B. Arthur, would sign the act into law one day after passage by Congress. The law would make polygamy a felony, as well as put other conduct under misdemeanor jeopardy. The law would be challenged three years later, in Murphy vs. Ramsey, on grounds that in was ex post factor, but the Supreme Court disagreed. It would be challenged again in 1890 when a case was brought against a subsequent law, the Edmunds-Tucker Act of 1887. The Supreme Court's second opinion on the subject also upheld the law banning polygamy. To this day, however, some have thought the law to be unconstitutional due to violation of the Free Exercise Clause.

So why did this issue come to pass and was it confined to marriage within the Mormom Society and Utah specifically? After the Civil War, the practice of polygamy, which had been in effect by the Mormon Church since the 1840's, was being compared to slavery. Their flight from Illinois to Utah after Joseph Smith's murder, with Brigham Young, would no longer keep them out of the reach of the law. Brigham Young, the first governor of Utah, had fifty-five wives and fifty-nine children. Forced inservitude of women to one man was no longer to be tolerated. Initial legislation in 1862, the Morrill Anti-Bigamy Act, banned the practice, but was largely unenforced due to President Lincoln's appreciation for Utah staying out of the Civil War.

By 1878, the Supreme Court had ruled in Reynolds vs. the United States, that polygamy was illegal in all United States territories, and that it was not against the Constitution's right of free religion, because it was a practice, not just a belief. This set the stage for Washington, and Congress, to consider legislation, that would officially state its end, and define penalties for breaking those laws.

When Did the Edmunds Act Take Affect and Who Was Prosecuted?

Enforcement began in 1887, but only against men. Society thought that women were the victims of the practice and therefore not subject to prosecution. Over one thousand men were prosecuted, the first being Rudger Clawson, a member of the Twelve Apostles of the Church of Latter Day Saints. The prosecutions continued even after the Mormon Church issued its Manifesto of 1890, banning the practice. Even after the Manifesto, prosecutions continued. Joseph Fielding Smith, nephew of Joseph Smith, and President of the Church of Latter Day Saints from 1901 to 1918, was prosecuted under the statute in 1906, and fined three hundred dollars.

Was Brigham Young himself ever brought to task. No. He had passed in 1877 prior to the Supreme Court's ruling in 1878 and the passage of the Edmunds Act.

AN ACT to amend section fifty-three hundred and fifty-two of the Revised Statutes of the United States, in reference to bigamy, and for other purposes.

Be it enacted by the /Senate and House of Kepresentatives of the ZTnited States of America in C ongress assembled^ That section fifty-three hundred and fifty-two of the Revised Statutes of the United States be, and the same is' hereby, amended so as to read as follows, namely:

Sec. 2. That the foregoing provisions shall not aifect the prosecution or punishment of any offense already committed against the section amended by the first section of this act.

Sec. 3. That if any male person, in a Territory or other place over which the United States have exclusive jurisdiction, hereafter cohabits with more than one woman, he shall be deemed guilty of a misdemeanor, and on conviction thereof shall be punished by a fine of not more than three hundred dollars, or by imprisonment for not more than six months, or by both said punishments, in the discretion of the court.

Sec. 4. That counts for any or all of the offenses named in sections one and three of this act may be joined in the same information or indictment.

Sec. 5. That in any prosecution for bigamy, polygamy, or unlawful cohabitation, under any statute of the United States, it shall be sufficient cause of challenge to any person drawn or summoned as a juryman or talesman, first, that he is or has been living in the practice of bigamy, polygamy, or unlawful cohabitation with more than one woman, or that he is or has been guilty of an offense punishable by either of the foregoing sections, or by section fiftv-three hundred and fifty-two of the Revised statutes of the United States, or the act of July tirst, eighteen hundred and sixty-two, entitled "An act to punish and prevent the practice of polygamy in the Territories of the United States and other places, and disapproving and annulling certain acts of the legislative assembly of the Territory of Utah," or, second, that he believes it right for a man to have more than one living and undivorced wife at the same time, or to live in the practice of cohabiting with more than one woman; and any person appearing or offered as a juror or talesman, and challenged on either of the foregoing grounds, may be questioned on his oath as to the existence of any such cause of challenge, and other evidence may be introduced bearing upon the question raised by such challenge; and this question shall be tried by the court But as to the first ground of challenge before mentioned, the person challenged shall not be bound to answer if he shall say upon his oath that he declines on the ground that his answer may tend to criminate himself; and if he shall answer as to said first ground, his answer shall not be given in evidence in any criminal prosecution against him for any offense named in sections one or three of this act; but if he declines to answer on any ground, he shall be rejected as incompetent.

Sec. 6. That the President is hereby authorized to grant am- nesty to such classes of offenders guilty of bigamy, polygamy, or unlawful cohabitation, before the passage of this act, on such conditions and under such limitations as he shall think proper; but no such amnesty shall have effect unless the conditions thereof shall be complied with.

Sec. 7. That the issue of bigamous or polygamous marriages, known as Mormon marriages, in cases in which such marriages have been solemnized according to the ceremonies of the Mormon sect, in any Territory of the United States, and such issue shall have been born before the first day of January, anno Domini eighteen hundred and eighty- three, are hereby legitimated.

Sec 8. That no polygamist, bigamist, or any person cohabiting with more than one woman, and no woman cohabiting with any of the persons described as aforesaid in this section, in any Territory or other place over which the United States have exclusive jurisdiction, shall be entitled to vote at any election held in any such Territorv or othar place, or be eligible for election or appointment to or be entitled to hold any office or place of public trust, honor, or emolument in, under, or for any such Territory or place, or under the United States.

Sec. 9. That all the registration and election offices of every description in the Territory of Utah are hereby declared vacant, and each and every duty relating to the registration of voters, the conduct (of elections, the receiving or rejection of votes, and the canvassing and returning of the same, and the issuing of certificates or other evidence of election in said Territory, shall, until other provisions be made by the legislative assembly of said Territory as is hereinafter by this section provided, be performed under the existing laws of the United States and said Territory by proper persons, who shall be appointed to execute such offices and perform such duties by a board of live persons, to be appointed by the President, by and with the advice and consent of the Senate, not more than three of whom shall be members of one political party; and a majority of whom shall be a quorum. The members of said board so appointed by the President shall each receive a salary at the rate of three thousand dollars per annum, and shall continue in office until the legislative assembly of said Territory shall make provision for filling said offices as herein authorized. The secretary of the Territory shall be the secretary of said board, and keep a journal of its proceedings, and attest the action of said board under this section. The canvass and return of all the votes at elections in said Territory for members of the legislative assembly thereof shall also be returned to said board, which shall canvass all such returns and issue certificates of election for those persons who, being eligible for such election, shall appear to have been lawfully elected, which certificates shall be the only evidence of the right of such persons to sit in such assembly; Provided That said board of five persons shall not exclude any person otherwise eligible to vote from the polls on account of any opinion such person may entertain on the subject of bigamy or polygamy, nor shall they refuse to count any such vote on account of the opinion of the person casting it on the subject of bigamy or polygamy; but each house of such assembly, after its organization, shall have power to decide upon the elections and qualifications of its members. And at, or after the first meeting of said legislative assembly whose members shall have been elected and returned according to the provisions of this act, said legislative assembly may make such laws, conformable to the organic act of said Territory and not inconsistent with other laws of the United States, as it shall deem proper concerning the filling of the offices in said Territory declared vacant by this act.

Photo source: Above, Cartoon of Grover Cleveland, the incoming President, as a Herculean figure against the issues of the day, including Mormonism and its issue of plural marriage, 1885, Bernard Gillam, Keppler and Swartzmann. Courtesy Library of Congress. Below: Seven of the wives of Brigham Young, 1899, Johnson Company. Courtesy Library of Congress. Info Source: The Center on Congress at Indiana University; Wikipedia Commons, Archive.org; Legisworks.org. 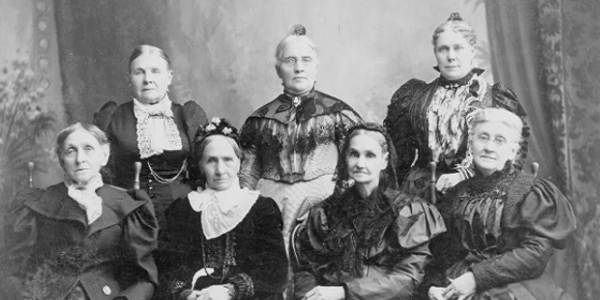