January 2, 1882 - The Standard Oil Company trust of John D. Rockefeller is begun when Rockefeller places his oil holdings inside it. 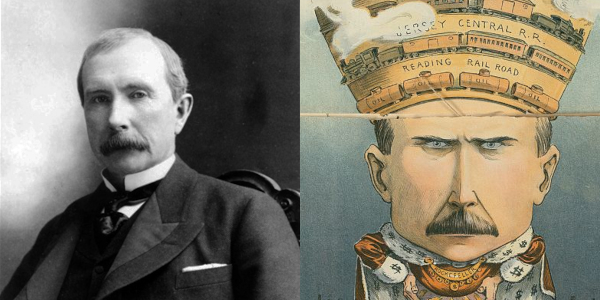 Over the twelve years since the establishment of the Standard Oil Company in 1870, John D. Rockefeller and his partners had been acquiring the horizontal and vertical assets to create a monopoly power in not only the oil industry, but in its companion industries. Yes, they were monopolizing the refining of oil, the transportation of its goods, and the products derived from it. And there had been detractors. Not only his competitors, of which there were few in the refining industry as Rockefeller nad bought up many. Not only in the producing industry, which had been under the thumb of Rockefeller's tactics of transportation and price. Not only the press, who was beginning to skew Standard Oil for their practicies.

Rockefeller had become the president of the National Refiners' Association in 1872, which controlled eighty percent of the refining capacity in the United States, against the wishes of some of his competitors in the Oil Regions of Pennsylvania. To counter this, a Petroleum Producers' Association, then Producers' Agency, had formed. It did not work. Their moratorium for six months of not drilling any new wells and a thirty day moratorium on pumping somehow played into Rockefeller's hands. He bought oil from the agency for a fixed price as wildcatters kept supply high despite the moratoriums. Rockefeller and the Refiners' Association would form an alliance with them, then renege on the contract. Both organizations would eventually cease to exist; Standard Oil, however, was even stronger.

By 1879, Standard Oil's control of the oil business and subsidiaries was at a zenith, causing the Commonwealth of Pennsylvania to take action, indicting Rockefeller for his actions against producers. After two years of legal battles in various states, a compromise was reached, the producers would withdraw their suits in exchange for Standard Oil and the Pennsylvania Railroad halting certain business practices which the producers objected to, as well as paying their legal costs, which amounted to $40,000.

1. They would hereafter make no opposition to an entire abrogation of the system of rebates, drawbacks and secret rates of freight in the transportation of petroleum on the railroads.

2. They withdrew their opposition to secrecy in rate making that is, they promised that they would not hereafter receive any rebate or drawback that the railroad company was not at liberty to make known and to give to other shippers of petroleum.

3. They abandoned entirely the policy which they had been pursuing in the management of the United Pipe Lines that is, they promised that there should be no discrimination whatever hereafter between their patrons; that the rates should be reasonable and not advanced except on thirty days' notice; that they would make no difference between the price of crude in different districts excepting such as might be properly based upon the difference in the quality of the oil ; that they would receive, transport, store and deliver all oil tendered to them, up to a production of 65,000 barrels a day. And if the production should exceed that amount they agreed that they would not purchase any so-called "immediate shipment" oil at a discount on the price of certificate oil.

4. They promised hereafter that when certificates had been given for oil taken into the custody of the pipe-lines, the transfer of these certificates should be considered as a delivery of the oil, and the tankage of the seller would be treated as free.

Additional conditions were placed on the withdrawal of the suits against the Pennsylvania Railroad.

1. That it would make known to all shippers all rates of freight charged upon petroleum. [This was an abolition of secret rates.]

2. If any rates of freight were allowed one shipper as against another, on demand that rate was to be made known.

3. There should be no longer any discrimination in the allotment and distribution of cars to shippers of petroleum.

4. Any rebate allowed to a large shipper was to be reasonable.

While the Compromise of 1880 took away the threat of indictment and extradition, it also warned the owners of Standard Oil that existing and approaching state laws were constantly making attempts against the scale of companies. With Standard Oil now owning many companies headquartered in dozens of states, they developed a secret agreement to place the stocks of the thirty-seven owners into a trusteeship of nine trustees; John D. Rockefeller, William Rockefeller, Oliver H. Payne, Charles Pratt, Henry Flagler, John D. Archibald, William G. Warden, Jabez Bostwick, and Benjamin Brewster.

Once the Standard Oil Trust was constructed, the headquarters of the company moved from Cleveland to New York City in 1885. They continued to take advantage of state laws more leniant to their goals. However, these steps, while successful, were also becoming suspect to legislation at the Federal level. By 1890, the Sherman Anti-Trust Act had passed overwhelmingly, fifty-one to one in the Senate, two hundred and forty-two to zero in the House of Representatives. Its main thrust was to control "restraint of trade," which Standard Oil, among other large companies, had benefited for twenty years. In 1890, Standard Oil controlled eighty-eight percent of the oil flow in the United States. The trust in its first form would only last twelve years, dissolved after sued by the State of Ohio in 1892. After the state of New Jersey passed corporate laws that allowed ownership of companies in other states, the trust was reborn as a Holding Company in 1899, Standard Oil of New Jersey, with forty-one companies. States continued to sue Standard Oil through the next decade, then, in 1909, Standard Oil was sued by the U.S. Justice Department for its monopoly and restraint of interstate commerce. In 1911, Standard Oil would be deemed an unreasonable monopoly by the U.S. Supreme Court and ordered dissolved.