February 28, 1883 - Vaudeville, the entertainment and theatrical phenomena, begins when the first theatre is opened in Boston, Massachusetts. 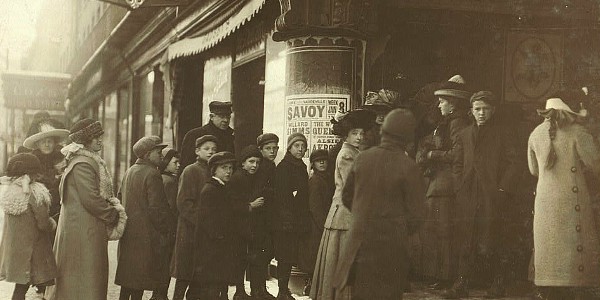 It wasn't actually the beginning of Vaudeville entertainment, but it was the first theatre dedicated to that purpose. Benjamin Franklin Keith opened what would become a series of Vaudevill theatres, and along with business partner, E. F. Albee (yes, relative of Edwin) managed a circuit of clean entertainment that provided homes for regional and national tours.

The first performance of a Vaudeville type show (Vaudeville is known as a relatively clean variety show, less refined that theatre, opera, or a symphony and more high-brow than Burelesque) is often credited to Tony Pastor, who featured the first polite variety show at the 14th Street Theatre in New York City two years earlier on October 24, 1881. How polite? Nothing bawdy. Meant for a family audience. No liquor. Gifts of ham and coal for those who attended.

By the late 1890's, the clean variety show format had expanded across the nation with standardized booking and a sizeable pool of acts.

B.F. Keith/Albee Circuit (1883-1927) - Begun in Boston, the dominant circuit on the East Coast through their merge with the Orpheum Circuit in 1928.

Pantages Circuit - (1902-circa 1931) Alexander Pantages owned/controlled eight-four theatres in many of the same cities as the Orpheum, showcasing both film and vaudeville.

RKO Circuit - Incorporated on June 28, 1928 as a merge between Keith/Albee and Orpheum due to declining revenues with the emergence of motion pictures. It would merge the same year with Joseph P. Kennedy's (father of John F. and Robert F.) FBO Film Company under the umbrella of RCA. RKO-Radio Pictures would be one of the major motion pictures companies of the 1930's and 1940's.

Aspects of a Vaudeville Show

Vaudeville shows were comprised of turns, or short acts, usually thirteen to a show, each at six to fifteen minutes in length. Singing groups, animal acts, comedians, jugglers, magicians, and short musical plays would comprise the acts.

George M. Cohan - Child actor in family vaudeville group called "The Four Cohans" from 1890-1901. Became one of the most successful Broadway writers from 1904 forward, performing in over three dozen musicals and writing over three hundred songs.

W.C. Fields - Comedian who began his career as a silent juggler in Vaudeville, 1898, and continued to feature in Vaudeville houses until 1915 when he gained great success in the Ziegfield Follies and later film.

Harry Houdini - Magician and escape artist who became an Orpheum Circuit artist in 1899, later touring Europe and around the world as what many think was the greatest escape artist act in history.

Bill BoJangles Robinson - American tap dancer, actor, and comedian who was the highest paid African American actor in the first half of the 20th century. Began his Vaudeville career at the Bijou Theater in Brooklyn in 1900. Joined the B.F. Keith circuit in 1903, later performing in both Keith/Albee and Orpheum shows. Later success on Broadway and in films.

Vaudeville's demise began with the advent of the motion picture, whose first showing in 1896 would slowly take revenue from live show acts. Eventually the various Vaudeville circuits would include live and motion picture elements within their bills. When the advent of full length talking pictures emerged in 1927, and with the financial difficulties of the Great Depression in the 1930's, Vaudeville would cease to be relevant compared to motion pictures, radio, and eventually television.