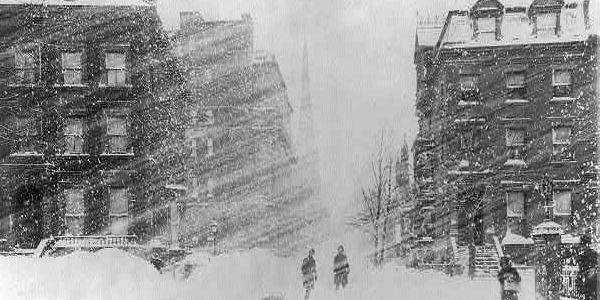 Fifty-eight inches of snow pounded the eastern seaboard in some locations. Blizzard conditions blanketed the Atlantic Coast from Washington, D.C. to Maine, grounding New York City to a halt, creating drifts and dangerous conditions for the quarter of the United States population at the time who lived in those quarters. The barometric pressure reached a low of 982 hPa (29.0 inHg).

There was a confluence of weather conditions that created the storm. High temperatures had consummed the coastline the day before, reaching over fifty degrees, so when a cold front raced from Canada the next day, March 11, colliding with the warm southern air, it not only created ice and snow, but eighty-five mile per hour winds. How low did the temperature go? In Central Park, it dipped to six degrees. The New York Herald reported a reading of one degree below zero. Although weather stations spread across the nation in 1888, they were little more than reporting stations sending information down the line. Since the storm hit so suddenly and rapidly, it was essentially an unpredicted and surprise event.

In New York City, fifteen thousand people were stranded on the elevated trains, only thirty of the one thousand people working at the New York Stock Exchange made it in, and Wall Street eventually closed for three days, with drifts in the city reaching to the second story of some buildings. It was the first time the New York Stock Exchange had ever closed. The East River froze over; when it thawed, some were stranded on the river icebergs. Lodging was at such a premium during the storm, that cots in lower class lodgings raised their prices five fold, to fifty cents per night. People ran out of coal to heat their homes; the price was raised, this time only doubled. In New York City alone, two hundred people died.


How did the Blizzard Affect Other Areas?

Saratoga Springs, New York was the hardest hit, with fifty-eight inches of snow, and Troy, New York received fifty-five inches. Boats on the Atlantic were capsized. Two hundred were grounded or wrecked with over one hundred seamen lost. There were snow drifts up to fifty-two feet in height. The average drift, hard to imagine, was thirty to forty feet high. Sustained winds were forty-five miles per hour. The storm, known as the Great White Hurricane, and its snow, took eight days to clear off the railroad tracks in New Haven, Connecticut. In Boston, the Boston Globe reported fifty mile per hour winds and a barometric pressure of 29.06.

Outcome of the Snow Storm

Damage caused by the three day storm reached twenty-five million (today about six hundred and eighty million dollars). It might have been higher had the storm occurred in January and not March, as cleanup would have lasted longer with limited melting in the deeper months of the winter. Due to the severity of the storm, public officials realized that having above ground telegraph, water, and gas lines was not a good idea. They were subsequently moved below ground. This was also true of the elevated trains in New York City. Ten years later, the subway system was constructed, but Boston had beat them to it, starting their own subway system one year earlier.

"Tremendous hills of snow were thrown up in the streets, and between them were paths through which the population crept along. Sometimes these hills were so high that a man would walk for half a block without being able to see anything but the sullen sky above him. Horses were employed in dragging away the fallen trees and telegraph poles. Thousands of abandoned wagons were dug out and dragged by double teams to places of shelter." - New York Herald, March 14, 1888. 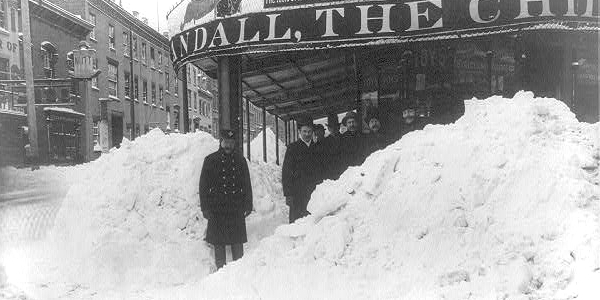