January 15, 1892 - James Naismith publishes the rules of basketball and the first official game of basketball is held five days later at the YMCA in Springfield, Massachusetts. 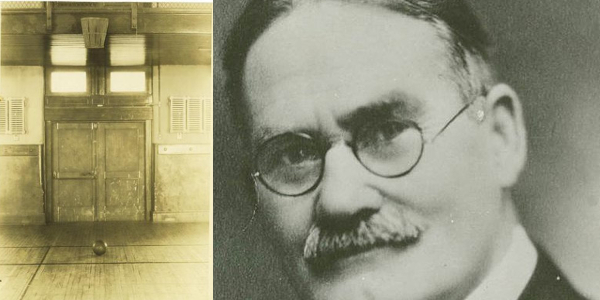 The natives were getting restless at what is now known as Springfield College in late 1891. Well, not really the natives, but the track and field team and other athletes were needing an outlet during bad winter weather for their energy at the then named International YMCA Training School. James Naismith was directed by his higher ups to invent a game, not too violent, that the athletes could play inside. By December, he'd put together an idea for a game that required passing, with a soft ball (at first a soccer ball), no dribbling, and a peach basket up high. Yes, he invented basketball. A few pickup games were attempted, then one month later, on January 15, 1892, Dr. James Naismith put down the "Founding Rules of Basketball" as played that first year in published form, and five days later directed the first official game at the YMCA. How important were these first rules? Well, if you attach value to a number with dollar signs, pretty valuable. In 2010, the original official copy of the rules sold for $4,338,500 to two Kansas fans, David and Suzanne Booth; it now sits, since 2016, on display at the University of Kansas, where Naismith was their first basketball coach.

The first rules for the game were different than today, and Naismith himself gave a report of the first game. They played nine on nine. They used a soccer ball. There were two peach baskets, not hoops, to shoot at.

"When Mr. Stubbins brot up the peach baskets to the gym I secured them on the inside of the railing of the gallery. This was about ten feet from the floor, one at each end of the gymnasium. I then put the thirteen rules on the bulletin board just behind the instructor's platform, secured a soccer ball and awaited the arrival of the class ... The class did not show much enthusiasm but followed my lead ... I then explained what they had to do to make goals, tossed the ball up between the two center men and tried to keep them somewhat near the rules. Most of the fouls were called for running with the ball, though tackling the man with the ball was not uncommon."

1. The ball may be thrown in any direction with one or both hands.

2. The ball may be batted in any direction with one or both hands.

3. A player cannot run with the ball. The player must throw it from the spot on which he catches it, allowance to be made for a man who catches the ball when running at a good speed if he tries to stop.

4. The ball must be held in or between the hands; the arms or body must not be used for holding it.

5. No shouldering, holding, striking, pushing, or tripping in any way of an opponent. The first infringement of this rule by any person shall count as a foul; the second shall disqualify him until the next basket is made or, if there was evident intent to injure the person, for the whole of the game. No substitution shall be allowed.

6. A foul is striking at the ball with the fist, violation of rules three and four and such described in rule five.

8. A goal shall be made when the ball is thrown or batted from the grounds into the basket and stays there (without falling), providing those defending the goal do not touch or disturb the goal. If the ball rests on the edges, and the opponent moves the basket, it shall count as a goal.

9. When the ball goes out of bounds, it shall be thrown into the field of play and played by the first person touching it. In case of dispute the umpire shall throw it straight into the field. The thrower-in is allowed five seconds. If he holds it longer, it shall go to the opponent. If any side persists in delaying the game, the umpire shall call a foul on that side.

10. The umpire shall be the judge of the men and shall note the fouls and notify the referee when three consecutive fouls have been made. He shall have power to disqualify people according to Rule 5.

11. The referee shall be judge of the ball and shall decide when the ball is in play, in bounds, to which side it belongs, and shall keep the time. He shall decide when a goal has been made and keep account of the baskets, with any other duties that are usually performed by a scorekeeper.

12. The time shall be two fifteen-minute halves, with five minutes rest between.

13. The side making the most points in that time is declared the winner.

Naismith Before and After His Invention

James Naismith was thirty years old when he invented the game, and a theology graduate of Montreal's Presbyterian College. Yes, he was a Canadian. After graduation, he eventually moved to Springfield to study athletics, a new discipline, under Luther Halsey Gulick, the superintendent of physical education at the International YMCA Training School, today's Springfield College. Now a graduate student and on the faculty, Naismith took up Gulick's challenge to invent a new game.

Once the game and rules were published, the game spread quickly, at first through the YMCA system and then more broadly. It was played by both men and women within the first decade at high schools, colleges, and other associations. One of the quickest changes to the original rules occured around the turn of the century when five versus five players became standard. Dribbling was allowed in 1901, but only one. In 1909, players could dribble more than once.

Naismith continued working in Springfield until 1895 when he moved to Denver. In 1898, James Naismith joined the physical education staff, as well as chapel director, at the University of Kansas. He became the first coach of the Kansas basketball team, serving through 1907. Phog Allen, one of his former players at Kansas, became his successor. 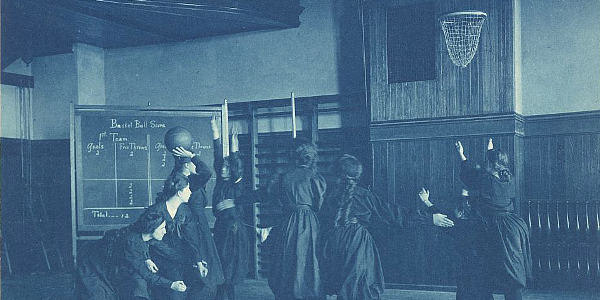