January 10, 1920 - The League of Nations is established with the ratification of the Treaty of Versailles, ending the hostilities of the first World War. In a final vote, the United States Senate again votes against joining the League. 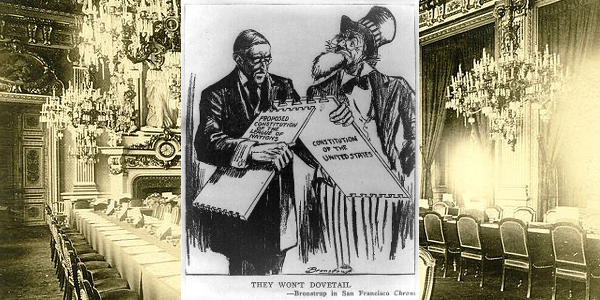 Basically, the United States did not like the idea of an international body of nations that could supercede its own decisions. They had already refused to ratify the Treaty of Versailles on November 19, 1919, ending World War I, due to the League of Nations being part of the document with powers to commit the United States to war that were against Constitutional covenants. They would even go so far, one year after this establishment of the League of Nations, to write their own individual treaties with the adversaries in the World War to officially end the war. They really did not like the idea of the League of Nations and some of its powers conferred in the Treaty.

From the beginning, it had been a debate between two ideas and how to merge them together, or whether merging them together would even be possible. How do you accomplish that when the idea of the League of Nations was in conflict with the United States Constitution in the eyes of many? Woodrow Wilson had crafted the language for its establishment when writing the Treaty of Versailles, believing that such an international body could prevent a conflict such as World War I from happening again. However, the debate was so vexing and the bill to approve the Treaty so difficult, that by the time the wording of its ratification occurred in November 1919, i.e. now with the reservations his opponents wanted to add, even Wilson urged that it shouldn't pass.

For Wilson, it had started out an easier proposition, as one of his Fourteen Points in the Treaty of Versailles for an international body to handle disputes between nations. He began speaking to Congress about passing such an idea in 1918. Wilson traveled to the Paris Peace Conference in 1919, the first President to travel abroad in an official capacity, in order to foster enthusiasm for the idea. However, no matter his fervor, by the time he would leave office in 1921, Democrat Woodrow Wilson would never be able to convince the Senate of its merits outweighing its negatives.

And the idea even had popular support, particularly in the press prior to the first vote. A poll by the Literary Digest of newspaper editors on April 5, 1919 showed that 718 favored the League of Nations idea, 181 were against, and 478 were conditional.

But Wilson's adversaries in the Senate, led by Republican Senator Henry Cabot Lodge, could not be budged. Lodge and the Senate wished to remove themselves from the entaglement of European politics and return to its stance of staying out of the affairs of nations removed from the Western Hemisphere. And while Lodge would listen to a compromise that allowed joining the League of Nations only if the ability could be retained that Congress could push the United States into war, part of the Constitution, but that would be abridged with the wording of the Treaty and League, he had to have those compromises.

"if there had been no proposition such as is included in Article 10, but a simple proposition that it would be our intention to aid France, which is our barrier and outpost, when attacked without provocation by Germany, I should have strongly favored it for I feel very keenly the sacrifices of France and the immense value her gallant defense was to the whole world. But they have made the French treaty subject to the authority of the League, which is not to be tolerated. If we ever are called upon to go to the assistance of France as we were two years ago, we will go without asking anybody's leave. It is humiliating to be put in such an attitude and not the least of the mischief done by the League is that Article 10 will probably make it impossible to do anything for France as Root recommends and as many of our Senators desire," Henry Cabot Lodge, August 11, 1919.

Lodge had written fourteen reservations about the Treaty to be included in one of the votes on November 19, 1919, that vote of which Wilson did not agree, and did not pass. Helping Lodge in his effort to hold the fort against joining the League of Nations without those conditions was Warren G. Harding, Republican Presidential candidate, then eventual victor in the 1920 Presidential election. He agreed with Lodge.

United States Votes Again Against Joining the League of Nations

On March 19, 1920, Wilson made another attempt to get the Senate on board with his idea of an international organization. It was not going to occur. Public support had already started to wane; the mistake of twinning the League of Nations to the Treaty of Versailles was apparent. Even with the reservations intact on the bill introduced, the Senate voted forty-nine for joining to thirty-five against, and with a treaty needing two-thirds majority to pass, the attempt to join the League of Nations was over. It fell seven votes short.

In the end, it was the ability of the League of Nations to force the United States, or any other nation, into conflict, without their approval. This covenant was changed when the United Nations was established, with the United States veto effectively allowing its Constitutional powers for Congress to wage war intact. 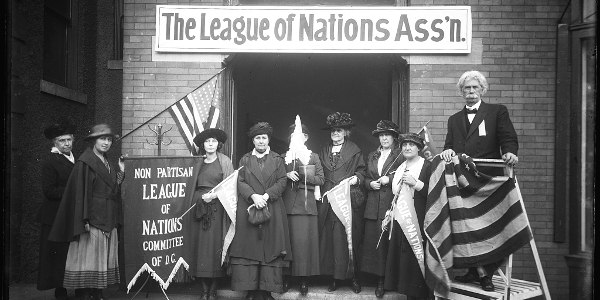