April 15, 1923 - The first sound on film motion picture Phonofilm is show in the Rivoli Theatre in New York City by Lee de Forest. 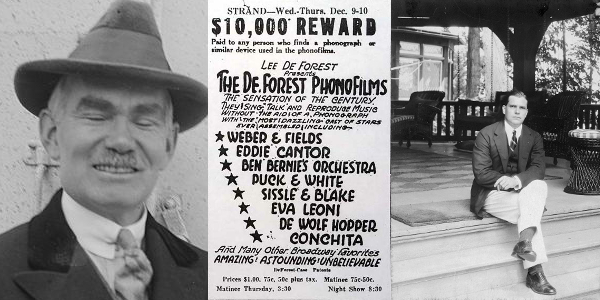 Lee de Forest, an inventor schooled at the Yale Scientific School, had been interested in the process of sound on film since 1913. His previous invention granted a patent in 1907, was the Audion vacuum tube which could amplify electrical signals. It would have great impact on the development of radio, a fact that de Forest promoted, calling himself the Father of Radio. In 1918, his move into sound on film began to take shape. A drawing emerged, with patents filed for his sound on film process four years prior to the first public showing. DeForest Phonofilm would record sound on film in parallel lines. The process of sound on film had been worked on previously by German inventors, Eric Tigerstedt, Josef Engl, Hans Vogt, and Joseph Massole, some of which de Forest knew.

DeForest Phonofilm began filming vaudeville acts, musicians, opera singers, and politicians, creating a series of short films. Most of the films, at first, were demonstrations in his attempt to woo motion picture studios to use his process. He was unsuccesful in interesting the studios. But his films included a variety of famous actors, singers, and politicans, including Eddie Cantor, Eubie Blake, Fanny Ward, Calvin Coolidge, Al Smith, and Franklin Delano Roosevelt. Coolidge became the first president ever recorded on sound film when DeForest Productions captured him at the White House in August of 1924.

Prior to that event, on April 15, 1923, de Forest debuted Phonofilm to the public. Eighteen short films were shown at the Rivoli Theater, the preeminent roadshow theater on Broadway in New York City that had opened in 1917 to the Douglas Fairbanks production of "A Modern Muskateer."

Without major studio backing, de Forest continued to show his films across the nation in independent theaters, predominantly with one reel shorts.

Theodore Case, a scientist, was the founder of Case Research Labs. In 1921, he had invented a Thallofide cell to record sound. Lee de Forest's attempts to that point had been unsuccessful, so he contacted Case about use of his cell on the phonofilm process. He would also use a Case invention, the AEO light, to record the soundtrack. However, when de Forest began promoting and showing his films, he gave Theodore Case no credit. Yes, the playbill for the Rivoli Theater engagement stated DeForest-Case Patents, but no mention during the performance was given to Case's part. Case thought de Forest was searching for fame and not a workable process. In 1925, he severed all ties with DeForest Phonofilm, and in 1926, sold his patents to William Fox at Fox Film Corporation.

Where Did Sound Film Go From There?

Use of Phonofilm was short lived, as the major Hollywood Studios preferred a system based on twenty-four seconds and not the twenty-one seconds in the phonofilm process. This discrepency resulted in high pitched voices for the Phonofilm shorts played in traditional theaters. By 1926, DeForest Phonofilm was bankrupt in the United States, although it continued in Great Britain with film productions through early 1929. By 1930, after producing several hundred short films, and enduring court challenges and emerging competition, de Forest had lost it all.

Vitaphone, from Warner Brothers, was a sound on disc system first used on the film by John Barrymore, Don Juan, on August 6, 1926. It used music and sound effects only, not dialogue.

The first true talking picture feature film, the Jazz Singer, with Al Jolsen in the lead, was introduced on October 6, 1927. It used Warner Brothers Vitaphone process.

Although DeForest was not successful in creating a process that the Hollywood Studios would move forward into the talking picture era, he had created the first use of sound film, albeit on one reel shorts. In 1959, Lee De Forest received an Oscar for his contributions to the motion picture industry. 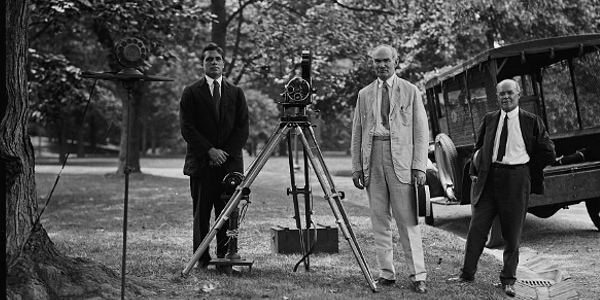