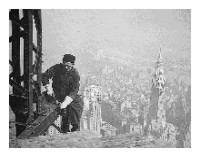 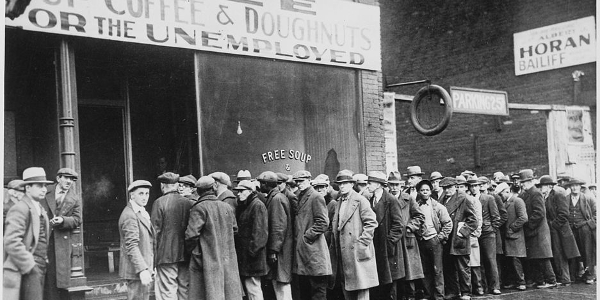 February 18, 1930 - American astronomer Clyde Tombaugh discovers the planet Pluto at the Lowell Observatory in Flagstaff, Arizona. Tombaugh was also known as one of the few serious astronomers to have claimed to sight UFO's.

April 1, 1930 - The population counted in the 1930 census reaches 123,202,624, a 16.2% increase over the past decade. The geographic center of the United States population had reached three miles northeast of Linton in Greene County, Indiana.

April 22, 1930 - The London Naval Reduction Treaty is signed into law by the United States, Great Britain, Italy, France, and Japan, to take effect on January 1, 1931. It would expire on December 31, 1936.
June 17, 1930 - The Smoot-Hawley Tariff Act is signed by President Herbert Hoover. Its effective rate hikes would slash world trade.
August 12, 1930 - Technology moves forward. Clarence Birdseye invents frozen food with his quick-freezing process and patents the concept. Also in 1930, the analog computer, or differential analyzer, is invented at the Massachusetts Institute of Technology in Boston by Vannevar Bush. Bush is also considered a pioneer in the development of the concept for the World Wide Web, with his idea for the memex.
December 2, 1930 - In order to combat the growing depression, President Herbert Hoover asks the U.S. Congress to pass a $150 million public works project to increase employment and economic activity. On the New York City docks, out of work men wait for food and jobs during the Great Depression, an outcome of the Stock Market crash of 1929 after the prosperous decade of the 1920's.

February 14, 1931 - The ruins of the ancient Indian villages around Canyon de Chelly are designated a national monument by President Herbert Hoover.
March 3, 1931 - The Star-Spangled Banner, by Francis Scott Key, is approved by President Hoover and Congress as the national anthem. The lyrics of the anthem were inspired during the bombing of Fort McHenry by British ships at the head of Baltimore harbor in September of 1814.

May 1, 1931 - Construction is completed on the Empire State Building in New York City and it opens for business. On the same day in Aniakchak Caldera, Alaska, a major eruption of Half Cone occurred, blackening the skies in southwestern Alaska for the next several weeks.

January 22, 1932 - The Reconstruction Finance Corporation is established to stimulate banking and business. Unemployment in 1932 reached twelve million workers.
January 23, 1932 - Carlsbad Caverns National Park installs and inaugurates the use of high speed elevators to descend visitors into the depths of the caves. These elevators travel seventy-five stories in one minute.
March 1, 1932 - The infant son of Charles Lindbergh and Anne Morrow Lindbergh, Charles Augustus Lindbergh, Jr., is kidnaped. He is found dead on May 12 not far from his home in Hopewell, New Jersey. Three years later, on February 13, 1935, Bruno Hauptmann was found guilty of the crime.

August 23, 1932 - The highest continuous paved road in the United States, the Trail Ridge Road in Rocky Mountain National Park, Colorado, is opened to traffic.
November 8, 1932 - Democratic challenger Franklin D. Roosevelt defeats incumbent President Hoover in the presidential election for his first of an unprecedented four terms. The landslide victory, 472 Electoral College votes to 59 for Hoover began the era of FDR that would lead the nation through the vestiges of the Great Depression and the ravages of World War II.

March 4, 1933 - President Franklin D. Roosevelt is inaugurated for the first time. His speech with its hallmark phrase, "We have nothing to fear, but fear itself," begins to rally the public and Congress to deal with great depression issues. His subsequent Fireside Chats, that began eight days later, would continue his addresses with the American public.

March 9 - June 16, 1933 - The New Deal social and economic programs are passed by the United States Congress in a special one hundred day session to address depression era economics. The gold standard was dropped on April 19 and ratified during the time of this session on June 5. Canada also drops using the gold standard.

March 31, 1933 - The Civilian Conservation Corps is authorized under the Federal Unemployment Relief Act. It would provide work for two and one-half million men during the succeeding nine years and help construct many national park and other projects across the United States.

May 27, 1933 - The Century of Progress World's Fair opens in Chicago, Illinois. Held along the banks of Lake Michigan on 427 acres, this depression era fair was a successful event, both in financial and attendance terms, taking advantage of cheap labor to keep costs low. It lasted for two seasons, drawing over 39 million visitors over its 1933 and 1934 years.
November 11, 1933 - In South Dakota, a strong dust storm strips topsoil from depression era farms. It was one in a series of such storms to plague the Midwest during 1933 and 1934.

December 5, 1933 - The 21st Amendment to the U.S. Constitution is passed, ending prohibition.

March 22, 1934 - The Master's golf tournament is held for the first time at Augusta National Golf Club, founded by the legendary amateur golfer Bobby Jones, in Augusta, Georgia. The 1934 winner was Horton Smith, of the United States, at four under par.

June 6, 1934 - The U.S. Securities and Exchange Commission is established with the signing of the Securities Exchange Act into law by President Franklin D. Roosevelt.

June 19, 1934 - The construction of the Natchez Trace Parkway, a scenic and historic trail between Nashville, Tennessee, and Natchez, Mississippi is approved in legislation signed by President Franklin D. Roosevelt.
August 15, 1934 - The United States pulls its troops from Haiti.
December 29, 1934 - Japan renounces the Washington Naval Treaty of 1922 and the London Naval Treaty of 1930. June 2, 1935 - The greatest hitter in the history of baseball, Babe Ruth, retires from Major League Baseball. He is among the charter class of players inducted into the Baseball Hall of Fame, in Cooperstown, New York, in 1939.
August 14, 1935 - The Social Security Act is passed by Congress as part of the New Deal legislation and signed into law by President Franklin D. Roosevelt. It would begin payouts to retirees within two years. Workers began contributing into the system during the same year, at a rate of 2% of the first $3,000 in earnings, half paid by the employee and half paid by the employer.

March 19, 1936 - Located at the homestead of Daniel Freeman, a filer of one of the initial homestead applications under the Homestead Act of 1862, the Homestead National Monument in Nebraska is signed into law by President Franklin D. Roosevelt. This historic site pays tribute to the many pioneers who settled the western states.
May 12, 1936 - The Santa Fe Railroad inaugurates the all-Pullman Super Chief passenger train service between Chicago, Illinois and Los Angeles, California.

August 1, 1936 - The Summer Olympics Games open in Berlin, Germany under the watchful eye of German leader Adolph Hitler, whose policies of Arian supremacy had already begun to take shape. The star of the games was Jesse Owens, a black American, who won four gold at the Berlin 1936 Games.

November 3, 1936 - Franklin D. Roosevelt overwhelms his Republican challenger, Alfred Landon, for a second presidential term. His Electoral College margin, 523 to 8, and 62% of the popular vote insured Roosevelt carte blanche in his goals of the New Deal.

March 26, 1937 - William Henry Hastie is appointed to the federal bench, becoming the first African-American to become a federal judge.
May 6, 1937 - At Lakehurst, New Jersey, the German airship Hindenburg bursts into flames while mooring. The fire consumes the largest airship in the world, 804 feet long, within one minute, causing the death of thirty-six people.

May 27, 1937 - The Golden Gate Bridge opens to pedestrian traffic and one day later, after a ceremonial press of a button from Washington, D.C. by President Roosevelt, receives its first vehicles. It created a vital link between San Francisco and Marin County.

May 17, 1938 - The Naval Expansion Act passes.
June 25, 1938 - The National Minimum Wage is signed into law within the federal legislation known as the Fair Labor Standards Act. It established a minimum wage of $0.25 at the time, as well as time and one half for overtime and the prohibition of most employment for minors.

July 3, 1938 - The final reunion of the Blue and the Gray is held. It commemorated the 75th anniversary of the Battle of Gettysburg in Gettysburg, Pennsylvania.

July 18, 1938 - Wrong Way Douglas Corrigan, with his faulty compass, lands his plane in Dublin, Ireland after departing from Brooklyn, New York on a trip to the west coast of the United States.
October 30, 1938 - A nationwide scare develops when Orson Welles broadcasts his War of the Worlds radio drama, which included fake news bulletins stating that a Martian invasion had begun on earth.

April 30, 1939 - The New York World's Fair opens for its two year run. This world's fair, spectacularly conceived for the Flushing Meadows trash dump made famous by F. Scott Fitzgerald in Queen's, New York, is often credited with proving to the American public that prosperity and good times could lay ahead after the decade of depression. The fair was centered by the Trylon and Perisphere theme structures and included the participation of 52 nations and 11 colonies, despite the growing presence of a looming World War. The New York fair closed on October 21, 1940 and drew 45 million paid visitors. During the same year, a competing fair in San Francisco, known as the Golden Gate International Exposition, became a second example of a spectacular world's fair signaling the end of the depression era. Held in the middle of San Francisco Bay, it opened February 18, 1939 and would close on September 29, 1940 with an attendance of over 15 million.
June 12, 1939 - The Baseball Hall of Fame opens in Cooperstown, New York, home of one of baseball's founders, Abner Doubleday. The first class of inductees included Ty Cobb, Babe Ruth, Honus Wagner, Christy Mathewson, and Walter Johnson.
August 2, 1939 - Albert Einstein alerts Franklin D. Roosevelt to an A-bomb opportunity, which led to the creation of the Manhattan Project. Einstein had arrived as a fugitive from Nazi Germany six years earlier on October 17, 1933.

September 5, 1939 - The United States declares its neutrality in the European war after Germany invaded Poland, effectively beginning World War II after a year of European attempts to appease Hitler and the aims of expansionist Nazi Germany. 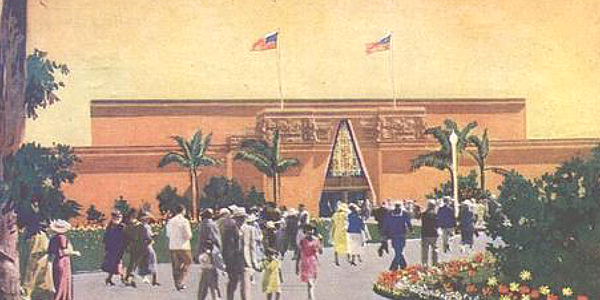 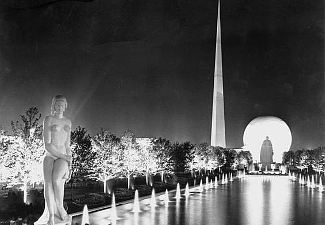 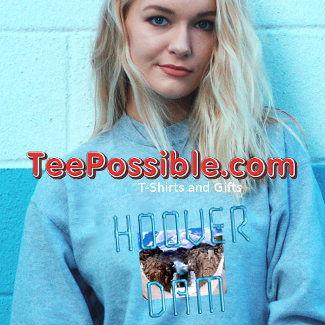