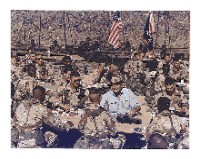 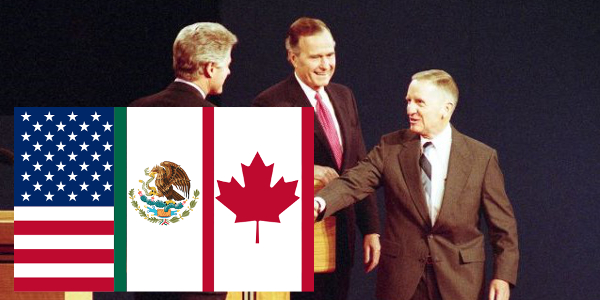 There was a desire to combat new trade arrangements around the world (i.e. the European Union) by the three North American countries, so representatives of Canada, Mexico, and the United States began to meet to discuss the possibility of joining in a free trade zone to encompass the entire North American continent. There had been an agreement between the United States and its northern neighbor, the U.S.- Canada Free Trade Agreement, since January 1, 1989. The attempt would be to bring those principles to bear, with the progressive elimination of most tariffs and restrictions on the amount of trade of certain goods, with some exceptions.

It had been a goal of President Ronald Reagan since his first campaign, but while he had been able to achieve this by 1988 with Canada, it had been elusive with Mexico. With the effects of the Latin American debt crises of 1982 still lingering once President George H.W. Bush came into office in 1989, he proposed the same with Mexico, with negotiations beginning in 1990, now including all three nations. They would reach an agreement in principle by December 17, 1992.

While the idea of free trade had many proponents, it was not an easy sell. Free trade versus no free trade advocates in Canada had been battling in national and provincial elections since the passage of the first United States and Canada agreement. The issue of whether to pass or not also became a big issue in the 1992 Presidential campaign between incumbant President Herbert Walker Bush, Democratic rival Bill Clinton, and third party nominee Ross Perot. Perot had been vibrantly against the bill.

"We have got to stop sending jobs overseas. It's pretty simple: If you're paying $12, $13, $14 an hour for factory workers and you can move your factory South of the border, pay a dollar an hour for labor,...have no health care - that's the most expensive single element in making a car - have no environmental controls, no pollution controls and no retirement, and you don't care about anything but making money, there will be a giant sucking sound going south...when [Mexico's] jobs come up from a dollar an hour to six dollars an hour, and ours go down to six dollars an hour, and then it's leveled again. But in the meantime, you've wrecked the country with these kinds of deals," Ross Perot, 1992 Presidential Debate.

After the Presidential campaign was over, with Bill Clinton winning election, the debate in Congress continued throughout 1993 until the House of Representatives voted 234 to 200 to pass the North American Free Trade Implementation Act on November 17, 1993. It was a bipartisan vote. The Senate agreed on November 20, 1993, 61 to 38. A bipartisan vote as well. President Clinton signed the legislation on December 8, 1993. He had supported NAFTA throughout the 1992 campaign.

STRENGTHEN the special bonds of friendship and cooperation among their nations;

CONTRIBUTE to the harmonious development and expansion of world trade and provide a catalyst to broader international cooperation;

CREATE an expanded and secure market for the goods and services produced in their territories;

ENSURE a predictable commercial framework for business planning and investment;

BUILD on their respective rights and obligations under the General Agreement on Tariffs and Trade and other multilateral and bilateral instruments of cooperation;

ENHANCE the competitiveness of their firms in global markets;

FOSTER creativity and innovation, and promote trade in goods and services that are the subject of intellectual property rights;

UNDERTAKE each of the preceding in a manner consistent with environmental protection and conservation;

PRESERVE their flexibility to safeguard the public welfare;

STRENGTHEN the development and enforcement of environmental laws and regulations; and

HAVE AGREED as follows:

The Parties to this Agreement, consistent with Article XXIV of the General Agreement on Tariffs and Trade, hereby establish a free trade area.

1. The objectives of this Agreement, as elaborated more specifically through its principles and rules, including national treatment, most-favored-nation treatment and transparency, are to:

(a) eliminate barriers to trade in, and facilitate the cross-border movement of, goods and services between the territories of the Parties;

(b) promote conditions of fair competition in the free trade area;

(c) increase substantially investment opportunities in the territories of the Parties;

(d) provide adequate and effective protection and enforcement of intellectual property rights in each Party's territory;

(e) create effective procedures for the implementation and application of this Agreement, for its joint administration and for the resolution of disputes; and

(f) establish a framework for further trilateral, regional and multilateral cooperation to expand and enhance the benefits of this Agreement.

2. The Parties shall interpret and apply the provisions of this Agreement in the light of its objectives set out in paragraph 1 and in accordance with applicable rules of international law.

Article 103: Relation to Other Agreements

1. The Parties affirm their existing rights and obligations with respect to each other under the General Agreement on Tariffs and Trade and other agreements to which such Parties are party.

1. In the event of any inconsistency between this Agreement and the specific trade obligations set out in:

(a) the Convention on International Trade in Endangered Species of Wild Fauna and Flora, done at Washington, March 3, 1973, as amended June 22, 1979,

(c) the Basel Convention on the Control of Transboundary Movements of Hazardous Wastes and Their Disposal, done at Basel, March 22, 1989, on its entry into force for Canada, Mexico and the United States, or

such obligations shall prevail to the extent of the inconsistency, provided that where a Party has a choice among equally effective and reasonably available means of complying with such obligations, the Party chooses the alternative that is the least inconsistent with the other provisions of this Agreement.

2. The Parties may agree in writing to modify Annex 104.1 to include any amendment to an agreement referred to in paragraph 1, and any other environmental or conservation agreement.

The Parties shall ensure that all necessary measures are taken in order to give effect to the provisions of this Agreement, including their observance, except as otherwise provided in this Agreement, by state and provincial governments.

Annex 104.1: Bilateral and Other Environmental and Conservation Agreements

2. The Agreement Between the United States of America and the United Mexican States on Cooperation for the Protection and Improvement of the Environment in the Border Area, signed at La Paz, Baja California Sur, August 14, 1983. 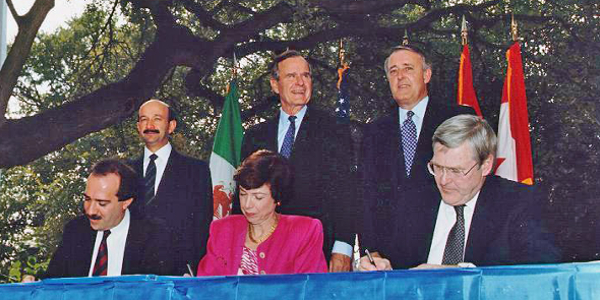 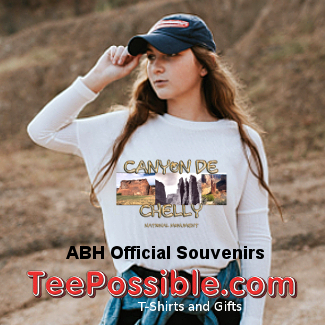 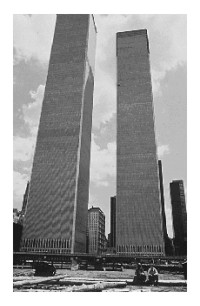