There are so many wonderful Indian culture heritage sites within the states of the southwest that sometimes the smaller sites, such as Aztec Ruins, gets less attention than it deserves. However, this collection of structures near the Animas River remains one of the most intact of such sites, and is a northwestern New Mexico treasure to visit. It was regarded so highly that its former owner, H.D. Abrams, became one of the most avid preservationists of the site, transferring it to the National Museum of American History, then National Park Service as a National Monument, which was proclaimed by President Warren G. Harding on January 24, 1923. Today the site, with some additions to its original acreage, is much like that of Abrams time. If you get the chance to visit while on or near the New Mexico Trail of the Ancients Scenic Byway, take it. Image above: Aztec Ruins National Monument, Carol M. Highsmith. Courtesy Carol M. Highsmith Collection, Library of Congress, Prints and Photographs Division. Let's start with its name. While the ruins are attributed to the Aztec nation by early settlers, it's not accurate. The structures were part of the Pueblo Indian culture, not Aztec, likely more accurately attributed to the Anasazi. The structures are nearly one thousand years old. Their rediscovey, and reconstruction, occurred after Earl Halstead Morris, an archaeologist, came to the ruins in 1916, and spent years uncovering Aztec West, the Great Kiva, and part of Aztec East. When the National Park Service oversaw the reconstruction of the Great Kiva, Morris surpervised.

Approximately sixty-four thousand people visit Aztec Ruins each year to view the structures which represent the largest planned community of the Puebloan people in the Animas River Valley, participate in astronomy programs, and witness the culture from nearly one thousand years ago. The site, likely chosen due to the river providing a good water supply for farming, became a central trade, ceremonial, and administrative site for other smaller communities in the Chaco Canyon region. It was inhabited for, what many think, was three hundred years. Aztec Ruins National Monument is located at 725 Ruins Road Aztec, NM 87410 along the Animas River in northwest New Mexico, just below the border with Colorado in San Juan County. Technically, it's part of Chaco Culture National Park. It's fifteen miles east of Farmington, New Mexico, off Route 516. It's north of Albuquerque off Route 550, nearly one hundred and eighty miles.

Aztec Ruins National Monument is located on three hundred and eighteen acres. There's a Visitor Center with exhibits, including artifacts nine hundred years old, 15 minute film on its history, "Aztec Ruins: Footprints of the Past," with park orientation and ranger guided activities. Structures include the West Wing, East Wing, Great Kiva, Hubbard Site, as well as Mound F, Mound A, and the Earl Morris Ruin. Some of the ruins are not open to the public.

Aztec Ruins National Monument is open year round, except major holidays, and is free to visit.

As noted above, the park is part of the Trail of the Ancients Scenic Byway, which includes heritage sites of the Ute, Navajo, Apache, and other Pueblo Indian tribes. This includes Chaco Culture National Historical Park, El Malpais National Monument, and El Morro National Monument, among others. You're also not too far away from sites such as Mesa Verde National Park in Colorado, and Canyon de Chelly National Monument in Arizona. Earl Morris needed a place to stay while escavating the ruins one hundred year ago so he used a house near the site that today is the Visitor Center.

The Aztec West Self Guided Walking Trail will take you through the Great House and Great Kiva. It's not long, one-half mile, but will be an amazing trip into the Pueblo past. The Great Kiva itself, a place of ceremony, is forty feet wide.

There's also a Heritage Garden and Native Plants Walk to tour, as well as guided walks, evening talks, astronomy programs and moon walks, plus native arts demonstrations. Check with the Visitor Center for the programs that are available on the day you plan to visit.

How large were the structures? The West Wing itself contained four hundred rooms three stories tall. What Else is Nearby

Above we focused on the National Park perspective of area attractions, but there's more to do here in the Farmington and Aztec area than you might think.

Aztec Museum and Pioneer Village, for one, is only two miles away, with its exhibits and twelve historic buildings that represent the earlier times of the settler era. Salmon Ruins is only twelve miles away, and for the more natural and recreation experience, there's Navajo Lake State Park.

If you're staying in Farmington, the largest closest city to Aztec Ruins, there's a good amount of history in the Farmington Museum, two Bolack Museums (Electromechanical and Fish and Wildlife), and the Museum of Navajo Art and Culture.

Photo above: Doorway of the ruins. Courtesy National Park Service. Abrams moved to Aztec, New Mexico and built a house in town for he and his family, including wife Rosa and four children, in 1906 after purchasing a stake in a local hardware company. One year later, in 1907, H.D. Abrams bought a one hundred and sixty acre homestead from John Koontz that contained the ruins of Aztec Ruins National Monument, intending to go into the sheep business.

National interest in the property grew, including that of the American Museum of National History in New York and archaeologist Earl Morris, leading to Abrams deeding some of the property to the Museum for restoration, then the National Park Service as a National Monument.

The house Abrams built in town is now on the National Register of Historic Places. 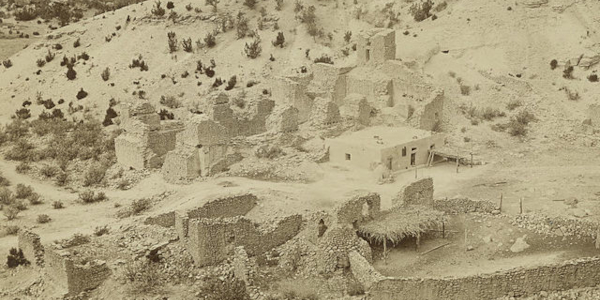 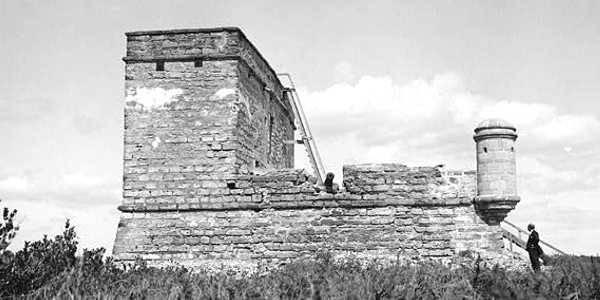