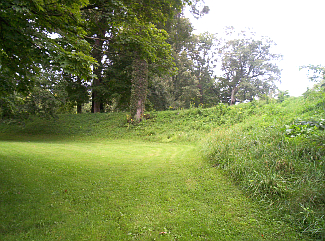 Photo above: Some of the Indian mounds at Great Circle Park in Newark, Ohio. 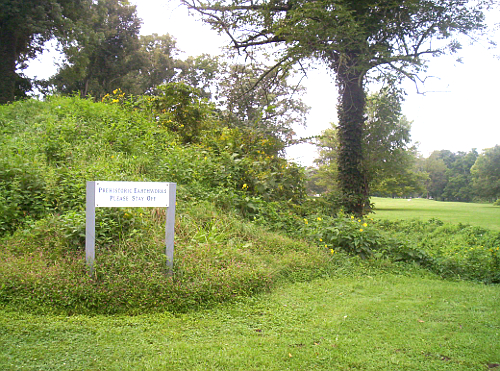 It's amazing really, from a bunch of different standpoints. First, that two thousand years ago, the Hopewell Indians would erect or build a series of earth mounds across three thousand acres, somehow aligned with astronomical coordinates, in the Ohio Valley. They're set in an ancient lunar observatory that tracks the moon on an 18.6 year cycle. Second, that two thousand years later it's not a bigger deal, isn't visited by hundreds of thousands, part of which isn't now included in a golf course, and isn't part of an extended Hopewell Culture National Historical Park, which has three units fifty miles south of Columbus in Chillicothe. But, oh well, it doesn't take away the fact that it's amazing, although the neglect it gets from a historic standpoint is mindboggling, too. 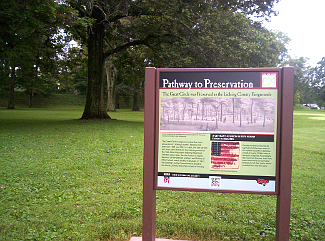 In what is now Newark, Ohio, the Hopewell Indians, without anything but hand tools dug deep trenches and mounds surrounding the three thousand acres in giant circles, octagons, and other shapes. They were oriented with the moon, stunning when you think of the timeframe. There are three sections to the complex, although only one is in the main park; the Great Circle (in park), the Octogan (in the Moundbuilders Country Club), and the Wright Earthworks (the remains in town off James Street).

If the Great Circle Museum is open, take the time to go inside and orient yourself. If it's not open, take a look at the bronze outline of the mounds on the tablet in front, then start taking the path, with historical markers, near the museum. They'll help explain what seems the unexplainable. From there, you might just have to trod through the grass to the mounds themselves, some up to eight feet high with a moat (okay, ravine) beside them.

The site is a National Historic Landmark, but it should be part of the Hopewell Culture National Park. The Ohio earthworks, as noted above, are not just located in Newark, they are in Chillicothe and elsewhere, including a fabulous Serpent Mound in Peebles, Ohio, but really should be grouped together in a larger quilt. Even the national park does not get enough attention as it is constituted now, i.e. just over 32,000 visitors last year.

Photo above: Part of the signage on the walking tour around the park and the preservation of the mounds.

From Columbus, Ohio - About 25 miles from the eastern suburbs. Take Interstate 70 east to Route 79 North. Go about seven miles. On your left is the entrance and parking lot of the Great Circle State Park. Be on the lookout, it's easy to pass. There's a path that will take you up to the Visitor Center/Museum. Prior to reaching the park , there are a number of places to stay and eat along the Route 79 corridor.

How Much to Visit
Free

Hours Open
Park is open year round. Great Circle Museum and Visitor Center is open Monday through Friday year round, plus Saturday and Sunday in the summer season. Museum is closed on some holidays. 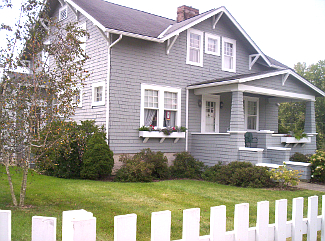 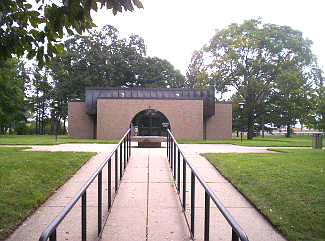 History of the Mounds

These Ohio mounds are two thousand years old. If you're not talking american history here, I don't know where you are. They are the largest set of geometric earthen enclosures on earth. Think Stonehenge with dirt instead of stones. They are viewed as one of only three ancient wonders in the New World, yet most don't know they exist.

Take the time to head to the Newark Earthworks if you're wandering down Interstate 70 some day. You may be pretty much alone as you wander around them, but you'll be doing it in one of the least recognized, but most significant wonders in the world. And take a ride south to the Hopewell Culture National Historical Park, too, as well as Serpent Mound southwest of there, you'll be amazed. 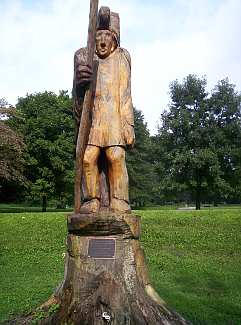 The Newark earthworks were built between 100 BC and 500 AD.

Wright Earthworks - Used to be a near perfect square enclosing 20 acres.

Photo above left: Great Circle Museum in the park. Above: Wood sculpture of a Hopewell Indian. 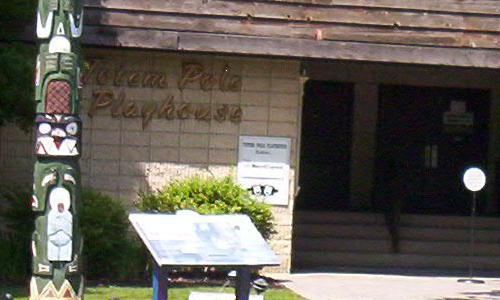 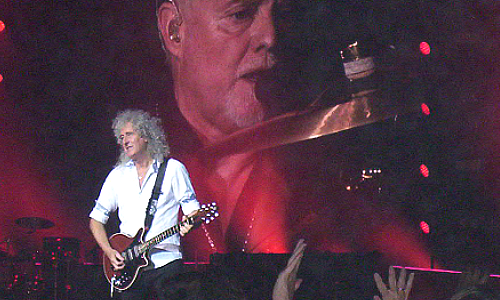