We were reminded while visiting the National Historical Park at Cedar Creek and Belle Grove by a reenactor, that not all battlefields get equal treatment, even if their contribution to the Civil War effort was high. And that is just where the Battle of Trevilian Station, also known as the Battle of the Trevilians, sits. It's the largest all cavalry effort of the war, occuring during the Overland Campaign on June 11-12, 1864. Photo above: General Sheridan (left), commander at the Trevilians, and his staff, including left to right; Colonel James Forsyth, Chief of Staff Merritt, Brigadier General Thomas C. Devin, Major General George Armstrong Custer, 1865. Courtesy Library of Congress. 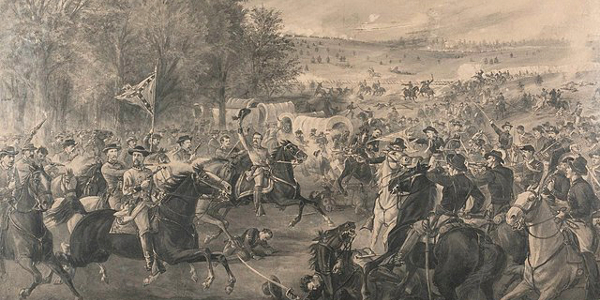 The plan was for the Union cavalry under Phil Sheridan (photo above of Sheridan and his staff in January 1865, including left to right; Gen. Sheridan, Col. Forsyth, Chief of Staff Merritt, Gen. Devin, Gen. Custer) to destroy the Virginia Central Railroad, which had reached Louisa in 1838 and provided access to the rest of the county thereafter to resupply Lee's army, as well as give time for Grant to cross the James River. General Grant got the Union Army across the James, but Sheridan was unable to permanently destroy the railroad, although he certainly destroyed some of it on a less than permanent basis.

There were 9,200 Union cavalrymen in the battle and they sustained losses over 1,000; the Confederates had 6,700 in battle and lost somewhere between 600-850 men killed, wounded, and missing. Imagine that folks, a combined horse force of nearly 16,000 men.

Today, Trevilian Station remains a great, but lesser known preservation success, and is well worth a visit for Civil War buffs and anyone with a penchant for heritage tourism. The Trevilian Station Battlefield Foundation and Civil War Trust have saved over 1,700 acres of battlefield land for interpretation and are in the process of saving more.

Photo above: Charge of the Confederate Cavalry at the Battle of Trevilian Station, 1891, James E. Taylor. Courtesy Wikipedia Commons.

A short walk and drive around the battle stops at Trevilian, all narrated by the Chief of Staff of the cavalry, for General Torbert, J.A. Norfield. It's a bit more than a minute, but hopefully spurs a visit. Over 1,700 acres of battlefield saved by the Trevilian Station Battlefield Foundation and Civil War Trust. There is a nine stop auto tour (10th optional) from the town of Louisa to surrounding area like the Ogg Farm and railroad tracks, photo above, that were the Union objection to destroy. You can download the tour from their site and follow.

How Much to Visit
Free. Donations accepted at the Sargeant Museum.

Hours Open
Driving Tour is open year round. Be mindful that much of the land that you travel past, beyond that owned by the Foundation and Civil War Trust, is private property. The Sargeant Museum is open on a seasonal basis Monday thru Saturday. Times are subject to change. 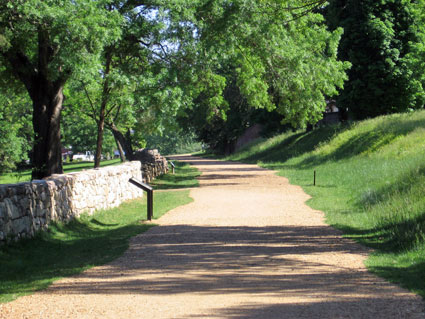 Sargeant Museum of Louisa County History, Lake Anna State Park, Monticello, and Montpelier. There's Fredericksburg and Spotsylvania National Battlefield plus the other Civil War battlefields of that park, Chancellorsville, the Wilderness, and Spotsylvania plus the battle sites around Richmond. There's also the sites of the battles around Culpepper, Brandy Station and Cedar Mountain. In Louisa County alone, there's the Green Springs National Historic Landmark District. There is a 9 stop auto tour for you to take. You can download the PDF from the Trevilian Station Foundation website. The Sargeant Museum of Louisa County currently serves as the visitor center for Trevilian Station, although the Trevilian Station Battlefield Foundation has bought property to house a proper Visitor Center. The Louisa County Musuem may be the better first location and is located on Fredericksburg Street. A Civil War Trails driving tour is available, although it is a work in progress with additional interpretation of the site to be added in the future. One thing you shouldn't miss is the Netherlands Hotel and Trevilian Station Battlefield Country Store. They're in disrepair, but awesome to see with some plans to refurbish. Louisa County has an audio driving tour available as well. You'll start your tour next to the Louisa County Courthouse. While the courthouse itself wasn't there during the 1864 battle, the old jail was, as well as the Crank Building. You can visit the site of Clayton's store, waymarker, but the store is gone, where Sheridan's forces camped, investigate Netherland Tavern (reconstructed) and its old souvenir shop, then cover the land where the Union and Confederate forces clashed on the Ogg Farm. 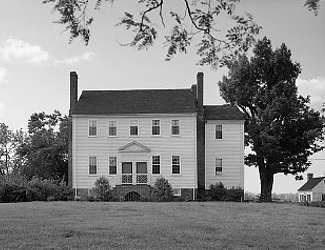 After you've taken your tour around the Trevilian Battlefield, Louisa County includes history that predates the Civil War, as well as encompasses it. The Green Springs District dates back to a Quaker settlement in the 1720's with unique structures. Just two include the house at Green Springs Plantation (1772) and Boswell's Tavern, where Lafayette camped while moving toward Cornwallis in the American Revolution in 1781. The district includes 14,000 acres of verdant farmland and great scenery.