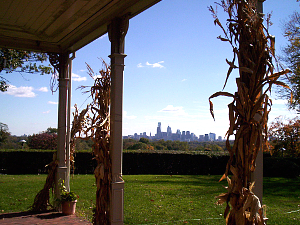 Photo above: Skyline of the city of Philadelphia today from the porch of Belmont Mansion. It's an unlikely location, you would think, at least today. Seated on a sparkling hill within Fairmount Park overlooking the skyline of the city (photo above right), Belmont Mansion is an elegant structure with an important past, now preserved to remember just what that was. During the time of Civil War, the mansion served as a station of the underground railroad and now is a museum dedicated to telling that story. 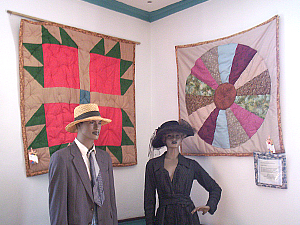 In the 1860's, Belmont Mansion was one of the large and prized homes in the region, but outside the city proper. It was, in some ways, remote, with a railroad that ran several hundred yards in front of it. In the late 1980's, it was a structure in disrepair with some wanting to destroy it, but important to save. The American Women's Heritage Society, a minority women's organization and the Fairmount Park Historic Preservation Trust sought to remedy that, as well as tell its history. That is what you will see when you visit today.

The Belmont estate reaches back to 1683, but it was the second owner, William Peters, who worked for William Penn's family, that built the mansion itself in 1745. The Peters family would work to abolish slavery from the time of the Revolution through the time of the Civil War, lending their home to an important station to freedom in the Underground Railroad that the mansion celebrates now. William Peters' son, Richard, was George Washington's Secretary of War, and along with his son, Richard, Jr., would also be part of the abolition movement, but kept out of view due to the laws of the time. They would fight the Fugitive Slave Act of 1793, buy a slave, Cornelia Wells, then free her, construct a tunnel from the railroad near the Schuylkill River to their basement and use it as a freedom passage, and keep the fugitive slaves in their attic until they could be safely moved further north.

One of the most interesting articles within the museum is a collection of signal quilts, which contained a series of a type of morse code to inform those on the underground railroad about the safety and circumstances of the journey. The railroad stop at Belmont Mansion where the slaves would jump the boxcars to the mansion's safety still exists, although it's hard to find in a forest near a runner's trail outside the mansion.

Photo above: Exhibits at the Underground Railroad Museum at Belmont Mansion.

Belmont Mansion Underground Railroad Museum is located in Fairmount Park, not far from the Please Touch Museum in Memorial Hall, the Philadelphia Zoo, Mann Music Center, and the Shofuso Japanese House and Gardens.

If you are touring Philadelphia and have a ticket for the Philadelphia Visitor Trolley or Philadelphia Phlash buses, they will take you to the Please Touch Museum. Belmont Mansion is a 1.25 mile walk through the park from that museum. It's a walk through history itself. The entire Centennial Exhibiton was held on these grounds, including exhibits by Alexander Graham Bell (phone), Thomas Edision (phonograph), Colt (pistol), Otis (elevator), Bartholdi, (the head and torch of the Statue of Liberty), and more. You'll also pass the entrance to the Japanese House and Gardens. Walk up the Avenue of the Republic north, right on Belmont Avenue, right on Montgomery Drive, and left on Belmont Mansion Drive. Mansion is at the top of the hill. Be careful on your walk, it's busy here with significant traffic, and there are not always sidewalks.

Video introduction in the orientation room situated in the original Boelsen Cottage (a tavern at one time). Mansion galleries depicting the role the Peters family played in the abolitionist movement. 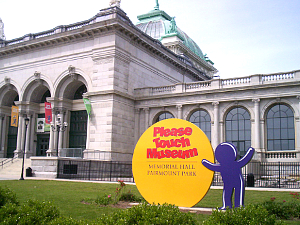 Photo above: Memorial Hall, now the Please Touch Museum, and formerly the Art Museum at the Philadelphia Centennial International Exposition in 1876. Below: Lithograph of the Horticultural Building at the Expo, 1877, Kronheim & Company. Courtesy Library of Congress. 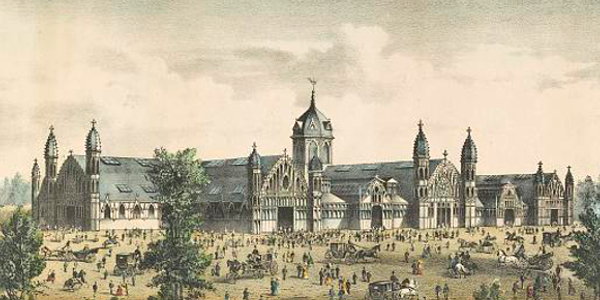 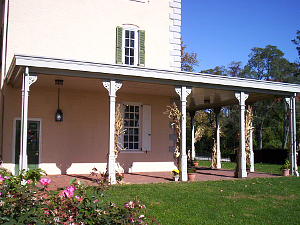 Mansion During the Revolution

On a downplayed note, Belmont Mansion played a very important role in the founding of the nation while Judge Peters (the original Richard) was Secretary of War. He would host a very interesting and important roster of dignitaries within the walls, including George Washington, Thomas Jefferson, John Adams, and James Madison.

Check out the official souvenirs of America's Best History
on some of the best historic sites and national parks of the United States.