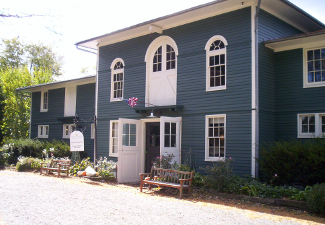 Photo above: Carriage house that now serves as the Visitor Center and Museum of the Oatlands Plantation, Leesburg, Virginia. It was grounds once owned by a man, King Carter, whose holdings in Virginia were of such gargantuan size, they might have been a state all on their own. Three hundred thousand acres were his holdings. Oatlands was just a modest acreage, three thousand four hundred and eight, owned by his grandson and awarded to his son, George Carter. Situated seven miles south of Leesburg, Virginia, this plantation was lived in by only two families in its history, the Carter and subsequent Eustis clan, with Civil War and slave holding past, and now sits in a pastural setting off Route 15 as a reminder of the wealth and lifestyle of the area. Today, you can read waysides about the Civil War camps and headquarters days following the Battle of Balls Bluff, step into the former carriage house and now Visitor Center and Museum, then take a guided tour of the Federal/Georgian home that housed the families which oversaw them all. Image above: Oatlands Mansion today with large Magnolia tree in front. 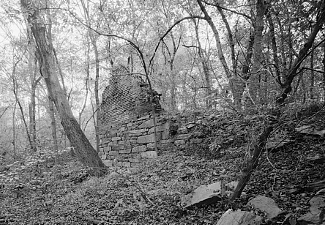 George Carter was the son of Robert Carter III, the grandson of King Carter. Despite their slave past, George's father Robert was anti-slavery and freed over four hundred slaves during his life. This did not fall down on George, however, who at one time, with his wife, held one hundred and thirty-three slaves on the grounds of Oatlands.

The Carter family would farm the acreage of Oatlands with crops of wheat, other grains, and sheep farming. They would operate a grist mill on Goose Creek, with production of grain, timber, and flax seed oil.

Sons of George Carter, George and Benjamin, both served in the Civil War for the South, enlisting on June 29, 1861. Benjamin would fight in the Battle of Balls Bluff on October 21, 1861, only seven miles from his home, and sustain a minor injury. General Nathan Evans and his staff, plus soldiers, would camp at Oatlands Plantation for ten days after the Battle of Balls Bluff. That and the Civil War moving into the area prompted the mother of George and Benjamin, Elizabeth Carter, to move from Oatlands to another property, Bellefield, in Upperville. She would never return full-time to Oatlands.

Martin VanBuren Jackson was born to a free black woman and enslaved black man owned by Elizabeth Carter. He would serve in the Union Army from 1863 in the 2nd Regiment of the U.S. Colored Infantry. 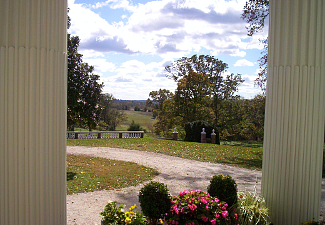 William Corcoran Eustis and Edith Livingston Morton Eustis bought Oatlands from William Hutchins, the Washington Post editor, in 1903. Hutchins never lived there. They restored the gardens, upgraded the home with modern conveniences and began to socialize with some of the most elite folks of their era. Who befriended the Eustis family? General George C. Marshall, Henry Cabot Lodge, President Harry Truman, and President Franklin Delano Roosevelt and wife Eleanor.

Photo above: View of the acreage from the front porch of the Oatlands mansion, looking east. Below: Another view within the four and one half acre Oatlands walled garden. 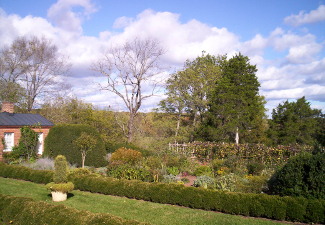 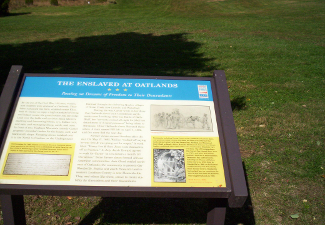 Photo above: Wayside exhibit near the parking lot of Oatlands explaining the role of the plantation during the Civil War, including the encampment by Confederate soldiers after the Battle of Balls Bluff in 1861.