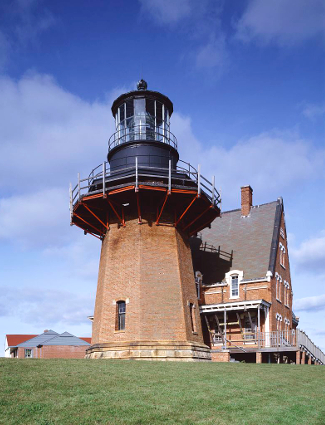 It might be the most unique lighthouse in the United States, this Block Island structure along the Mohegan Bluffs that rests on the island of the same name in the shipping lanes of the Atlantic Ocean in Rhode Island. It was built as the pride of the U.S. Lighthouse Bureau in 1874. Today the lighthouse can be visited in the summer for lighthouse tours. It is known as the Southeast light. It has a sibling on the north called the North light. Photo above: Stereoscope of Block Island Lighthouse, 1890. Historic American Buildings Survey. Courtesy Library of Congress. 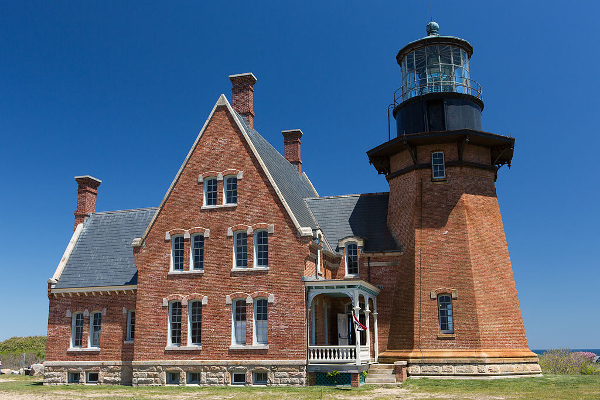 The Southeast Light was commissioned to be built in 1856, but the funds diverted to build a new North Light damaged by storm. When the light was first lit in 1875, the structure was a Gothic Revival masterpiece. While its function was the same as other lighthouses atop its sixty-seven foot tower, the building was brick, and just plain looks different, some of which comes from the two keeper's houses, one for the keeper himself, and the other for his assistants, that is attached.

Today, in summer, you can tour the lighthouse and hear stories of its function, construction in 1874, move in 1993, and the shipwrecks that occurred off Block Island over the years. Ask where the lighthouse used to be. Prior to 1993, it was three hundred feet closer to the bluff. Today there's a boulder that marks the original spot.

Block Island is just that, an island located 1.2 miles southeast off the coast of Rhode Island. It can only be visited by boat or plane. Just over one thousand people live there full-time. For most, they will take a ferry from Port Judith. There is summer service from Newport and Fall River, Rhode Island; New London, Connecticutt; and Montauk, New York.

The Southeast Light, keeper's quarters, and spectacular views of the Atlantic Ocean. There's also a small museum and gift shop.

Hours Open
The lighthouse is open in the summer. Times and dates vary by season. Check with the lighthouse for the current schedule.

There's more than just the Southeast Light on Block Island. Other attractions include a variety of beaches for fishing and bathing, the North Light, and a walking tour in Old Harbor that includes eight stops, a Visitor Center, the 1661 Inn Farm and Gardens, and the Solviken Preserve. If you've got a bike or car, there's more to see, including the Abrams Animal Farm and the Spring House Hotel. Of course, off the island, there's the larger attractions of Plymouth Rock and Boston not too far afield. 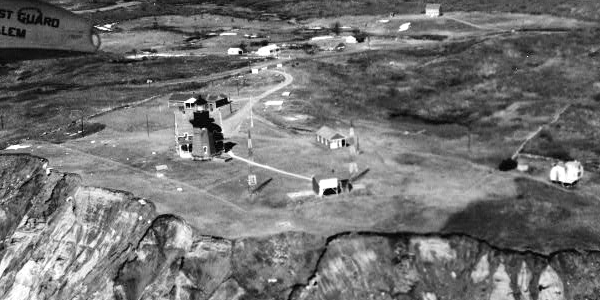 It's Indian heritage lay with the Niantic tribe, with some researchers stating a population on the island that may reach back to 500 B.C. For European history, you push much further forward. In 1524, Giovanni Verrazano sighted the island on his excursion that eventually got him a bridge named for him in New York, noting the topography and the fact that it was peopled. Adrian Block, a Dutch Explorer, was the first to chart the island in 1614. Yes, he named it after himself. It was settled by Europeans in 1661. 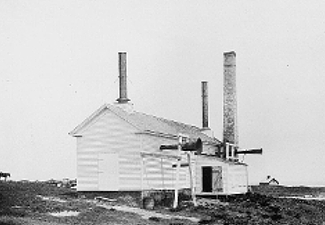 New Shoreham, the main town on Block Island, has just over one thousand yearly residents, but surges in the summer tourist season with beach goers. There's a variety of events, including the Fourth of July Parade, with decorated floats, and the Block Island Sailboat Race, a week long event. There are fifty seasonal restaurants, seventeen miles of beaches, and a nature conservancy. There are a variety of Victorian resorts to stay in, including the Atlantic Inn, Spring House (built in 1854 as the first hotel on the island), Manisses, the National Hotel, and the Surf Hotel. There's also a variety of guest houses and Bed and Breakfasts.