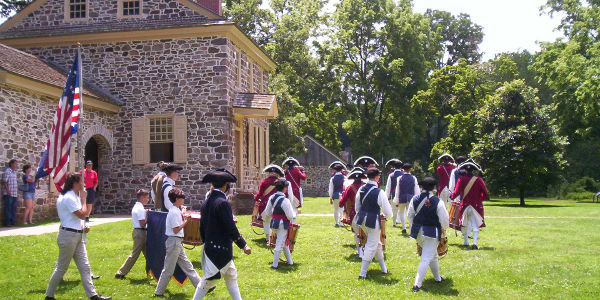 Image above: Washington's headquarters, part of the Village of Valley Forge during the Battle. Schuylkill River landing behind photograph; forge and military magazine several hundred yards in front. When you visit Valley Forge National Historical Park, rangers often begin their talks with one predominantly true fact, that the large park in suburban Philadelphia is not a battlefield. It's an encampment where the Continental Army and George Washington spent a bad winter. But what they will say, if pressed, is that a Battle did occur here prior to the camp, one that almost cost the United States a very important current fact and event celebrated historically and on Broadway. It almost cost America a musical. Oh, no!!!! Yes, at the Battle of Valley Forge, Alexander Hamilton almost did not make it. And although the Battle of Valley Forge is little known and not that big or important, it almost cost America sold out shows and a rebound for history, theater style. Let's find out how. Photo above: Village of Valley Forge with Schuylkill River in front, 1890. Courtesy Library of Congress. Although the 1777 footprint of the village was different, the approximate landing area where Hamilton was located and nearly shot during the battle can be seen. 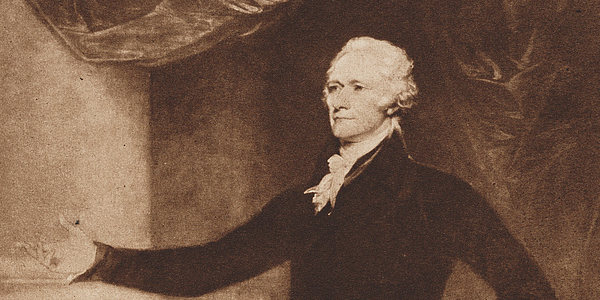 The British had sailed down to the Chesapeake Bay and were attempting to take Philadelphia from the south. They had won the Battle of Brandywine and were winning the Battle of the Clouds ten miles west of Valley Forge when a tropical storm hit, dispersing both forces. George Washington had moved his main force west to the forges of Warwick and Reading, but left one quarter of his troops under General Wayne near Paoli. The British under General Howe were camped three miles south of Valley Forge. That location, Valley Forge, is where a Continental Army magazine, a military storehouse for munitions and grain, had been commanded to be built in the summer of 1777, prior to the British move. Stored there by these September battles were four thousand barrels of wheat and flour, plus iron equipment such as axes, shovels, horse shoes, and more.

The British thought the forges and supplies had been completely abandoned. Washington thought it a good idea if he sent someone there to gather the supplies and transport them west toward his position where they would be safe. If they could not transport them, they were to be destroyed. General Washington chose two of his trusted commanders and aides, Captain Harry Lighthorse Lee and Lt. Colonel Alexander Hamilton to travel to Valley Forge and gather the important food and munitions. They would each have eight men with them. On September 18, 1777, both arrived at Valley Forge. The British had the same idea.

The Battle of Valley Forge in what is now Valley Forge National Historical Park was combated near the headquarters where Washington would stay the winter from December 1777 to the next June. A small village of buildings were there at the time, including a landing on the Schulykill River, the forges themselves, and the military storehouse four hundred yards south of the landing. Valley Forge Historical Park is located about twenty miles west of Philadelphia.

The site of the forge is there, but most of the period buildings of the village and the magazine at the time of the Battle of Valley Forge are gone. Washington's headquarters, a period building itself, and some other structures, plus the important Valley Creek and Schuylkill River are there. The site of the village surrounds the headquarters area on both sides of Valley Creek, as well as on the opposite side of Route 23, a historic road, where the current Horseshoe Trail begins. Valley Forge Historical Park is a thirty-five hundred acre park which celebrates the subsequent winter encampment in the winter to spring of 1777 and 1778.

When is Valley Forge open and How Much to Visit?

The national park is open year round, with facilities closed on several major holidays. The site of the Battle of Valley Forge is open every day to explore, although access to the river landing area which played an important part has now been breached by the railroad and not accessible to the public. The park is free to visit.

Prices subject to change without notice.

The attractions of the Philadelphia Campaign of the American Revolution, including Valley Forge, span all compass points around Philadelphia. They include many historic sites that don't get as much notice, but should, about the American Revolution itself. These include the battlefields of Brandywine, Battle of the Clouds, the Paoli Massacre, Camp Pottsgrove, Battle of Germantown, Fort Mifflin, Red Bank, and the Battle of Whitemarsh. 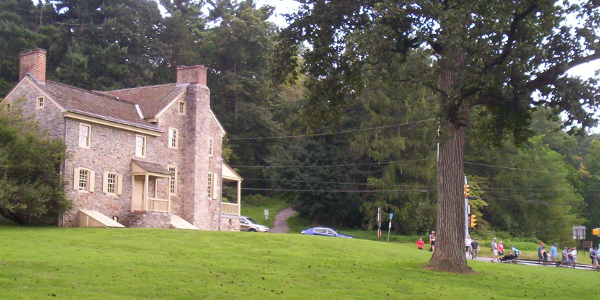 What About the Battle

When Lee and Hamilton arrived, they posted mounted sentries near the stores and commandered two barges at the river landing of Valley Forge and began to ride the four hundred yards toward the magazine. At the same time, six hundred British soldiers traversed period Gulph Road, today's Route 23, and were noticed by the sentries. Shots rang out from the Continental Soldiers, surprising the British, who'd thought it abandoned. But the advantage of six hundred to teens was easy to sight, and preparations be darn, the storehouse was quickly abandoned. Lee and his troops dashed for the bridge over Valley Creek under a barrage of bullets from the chasing British horsemen. Hamilton quickly turned back to the barges on the Valley Forge landing, now also in pursuit by the British. By the time Hamilton's barge pushed into the swift and swollen water, the craft was engulfed in shot by the British guns, impossible to stay atop. Alexander Hamilton jumped into the muddy water of the September river and dove beneath the barge to avoid destruction. Nobody saw him emerge from the water.

When Harry Lee dispatched a message to Washington's headquarters, he wrote that Hamilton, his most influential aide-de-camp, had been killed. Shortly thereafter, Hamilton entered Washington's tent. His upbringing in the Caribbean and prowess in the water had enabled him to remain underwater long enough to approach the opposite banks of the river and escape. So, today, for different reasons, we have a musical detailing other aspects of Hamilton's life. And perhaps not all because, but somewhat because, Hamilton swam well, and the British, despite their numerical advantage, had not shot him at the little known Battle of Valley Forge. They did, however, gain all the grain and munitions of the storehouse and use it to their advantage before destroying many buildings of the village. Casualties for the troops under Lee's and Hamilton's command that day; one killed and one wounded plus Hamilton lost his horse. Two days later, the British would ambush General Wayne at the Battle of Paoli, flush with new supplies.

There are some who say this is legend, that Hamilton just rode away from the shots of the British and did not dive into the river. We don't know; we weren't there. But either way, Alexander Hamilton almost did not make it out of the battle, long before he became worthy of composition, and if that were true, ... well, que lastima, ... No Musical.

Photo above: Area along Gulph Road where the British approached the Village of Valley Forge during the battle. Building in photo is historic, but not period at the time. 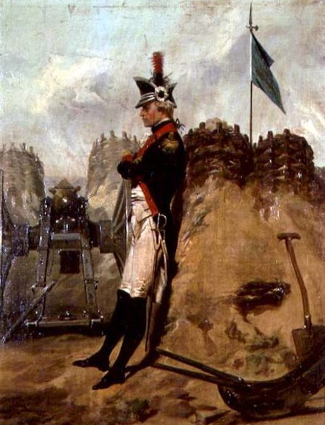 Alexander Hamilton joined the American Revolution cause after the battles at Lexington and Concord in 1775, part of the New York militia known as the Corsicans or Hearts of Oak with classmates from King's College, today's Columbia. His first action, raiding British cannons in the Battery, raised his profile and by 1776 he was captain of an Artillery company. That year, Hamilton saw action in the Battle of White Plains and the Battle of Trenton, which led to his battery in action in the Battle of Princeton on January 3, 1777 where three cannon under Hamilton fired on Nassau Hall, forcing one hundred and ninety-four British soldiers to surrender.

With his increased profile, he subsequently became the Chief-Aide-de-Camp of General George Washington with the rank of Lieutenant Colonel. Hamilton, after escaping in the September Battle of Valley Forge, served six months during the Valley Forge encampment as Washington's chief aide inside an office within the small headquarters in the village.

Although Hamilton served Washington well during four years of the American Revolution as his aide, he desired to return to field command. This occured on July 31, 1781. He would command three battalions, including French troops, during the upcoming Battle of Yorktown.

Photo above: Alexander Hamilton in the military uniform of the New York Artillery, portrait by Alonzo Chappel. Courtesy Wikipedia Commons. Below: Drawing of the Village of Valley Forge and its forges around 1775, 1984, George Wheeler Stone, "The Mount Joy Forge on Valley Creek". Courtesy "Water and Fire, The Power Behind Valley Forge," Mike Bertram, 2004, Tredyffrin Easttown Historial Society, History Quarterly Digital Archives. The location of the supplies would seem to place them just south of what is listed as the Great Road, today's Route 23. 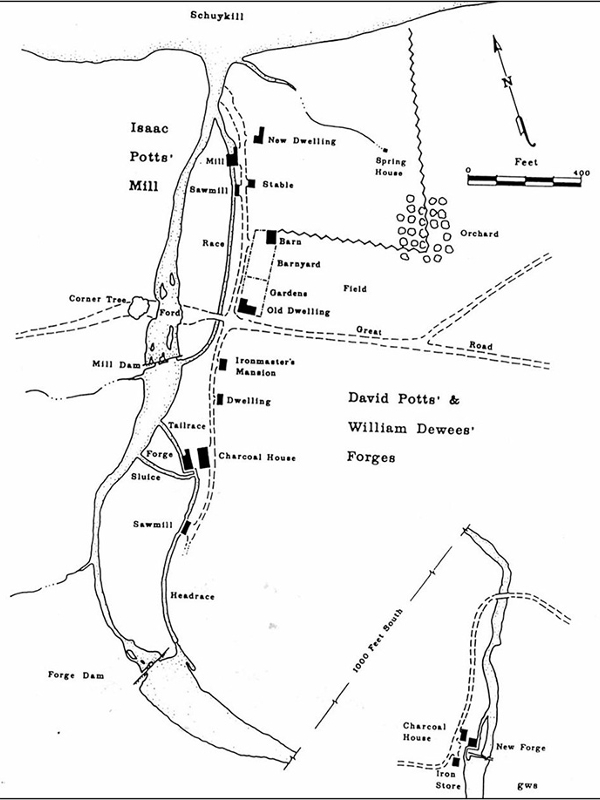 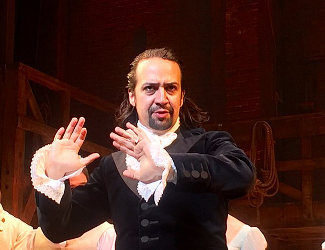 Starting off-Broadway in 2015 and transferred to the Great White Way due to its critical and box office success, the musical of Alexander Hamilton's life has captured the attention of New York City and the theater world, plus increased the interest in the times of the Founding Fathers. The musical, which incorporates song and rap, plus non-white actors as the historical figures, covers Hamilton's life from his days as an orphan in Nevis, Caribbean, his days in the American Revolution both as aide-de-camp to Washington and previously in field command, then his days in the treasury and government at its infancy, through to his disputes with Aaron Burr, which would lead to his demise in a duel with Burr.

The musical has been such a success that it has impacted American history going forward. The decision to replace Alexander Hamilton on the ten dollar bill was reversed; Andrew Jackson will now be replaced on the twenty dollar bill by Harriet Tubman.