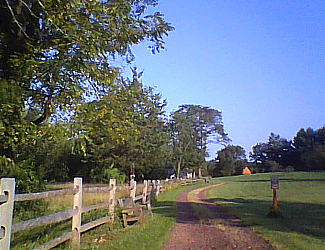 Image above: Path leading to the historic sites within Daniel Boone Homestead. Over five hundred acres in southeastern Pennsylvania, about fifty miles from Philadelphia, were considered the frontier in the times of Daniel Boone. Today, it's the deep suburbs of Philadelphia and part of a remarkably intact historic site, including Daniel Boone's father, Squire Boone's, two hundred and fifty acres, and the home site that Daniel Boone grew up in. Things are changing there as far as who takes charge of the state owned site; once again, the state will run things starting spring 2020. It had been run by a friend's group since 2009, whose diligent stewardship of the property and pristine history allowed the site to remain open during difficult times. Thanks to them for that!

The site tells the story of three families who lived there, including famous Daniel, with Heritage Days, guided tours, and paths through the landscape. There's a small fee for a guided or self-guided tour of the grounds (pay at the Visitor Center), and there's plenty to see, including the home, a sawmill, Visitor Center, and more. Photo above: Frontiersmen, including Daniel Boone, meeting a Boy Scout, 1912, Will Crawford. Courtesy Library of Congress. Today Boy Scouts, and other groups, can camp at the Homestead. Prior registration necessary. 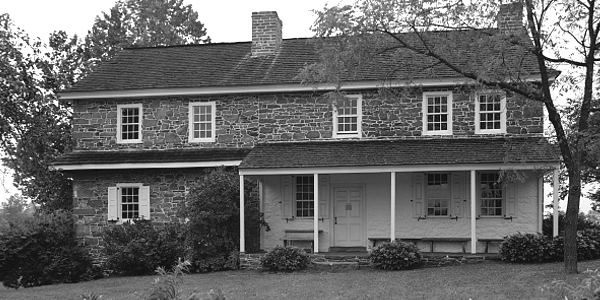 Yes, while the homestead has a focus on famous frontiersmen Daniel and the first sixteen years of his life, it also tells the story of the Maugridge and the DeTurk families. Daniel was born November 2, 1734 and lived at the homestead until the family moved to North Carolina in 1750. The family were Quakers, but expelled after two of Squire Boone's children, not Daniel, married outside the faith.

The Maugridge family purchased the home in 1750 and lived there for sixteen years. They were friends of Benjamin Franklin and expanded the home. The DeTurks bought the property in 1770 and lived there during the American Revolution, including the battles of Brandywine, Battle of the Clouds, and Washington's Philadelphia Campaign trek to the iron forges, Reading and Warwick, south of the Boone homestead. 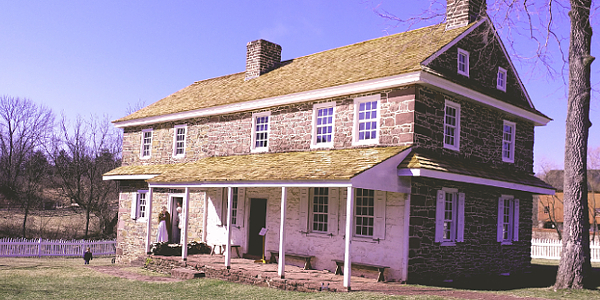 Take a hike around the festivities of Daniel Boone's Homestead with us in our Minute Walk in History, then head off to the eastern Pennsylvania site where Daniel Boone was born, learned to hunt, fish, and began to explore, before heading west through Cumberland Gap and into his role as the frontiersman of Tennessee and Kentucky.

Daniel Boone Homestead includes five hundred and seventy-nine acres of land with buildings representing both the time of Daniel Boone, as well as newer structures built by the other families who lived there. There's a Visitor Center with fifteen minute film, sawmill, Daniel Boone homesite within the Historic Area that includes eight 18th and 19th century buildings to explore. During special events, such as Charter Day in early March, living history interpretors give tours of the various buildings.

When is the Homestead Open and How Much to Visit?

Daniel Boone Homestead is open year round on weekends, with expanded days and hours in the spring, fall, and summer. With the state taking control of the site in more full fashion in 2020, spring hours are the only ones that have been established with the site open daily 9:00 a.m. to 4:00 p.m. and the Visitor Center and structures open Friday to Sunday. It is expected that summer hours will be extended.

A new pricing structure will begin on June 30, 2020. Until that time, the site is free to visit.

Prices subject to change without notice.

You're just on the edge of the Philadelphia historic attractions, including Valley Forge, plus other sites of the American Revolution. Even closer by are unique sites about the Pennsylvania frontier and iron forges, including Hopewell Furnace, Joanna Furnace, and others lost to history, Reading and Warwick Forges. And if you like to walk in unique deep forests that don't seem like this part of Pennsylvania, there's Nolde Forest not too far away. 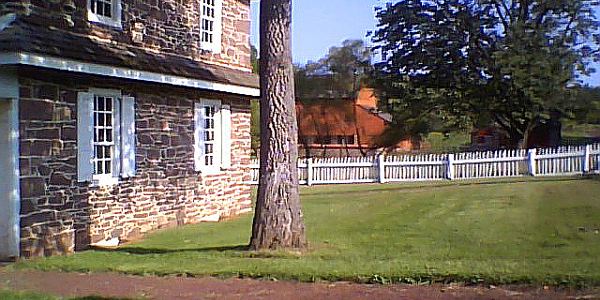 Daniel was born three years after his parents built the log cabin, the sixth of eight children. The area was surrounded by several Lenapi Indian villages, and relations with the Lenapi by the Quakers, of which the Boone's were members, was considered good. When Daniel Boone began to hunt at age twelve, he was taught by both white and Indian friends. Legend states that he had considerable skill as a hunter, beyond that of others. He would wander from the homestead into the forests of eastern Pennsylvania as a young man, hunting for game to feed the Boone family.

The debate and banishment of the Boone family from Quaker society would impact Daniel throughout his life. He would never attend church again, but did baptize his children.

Photo above: Upper side of the expanded Boone birthplace home with other period barn in the distance. Below: Sawmill built by Daniel Bertolet on another nearby site and transported to the Daniel Boone Homestead in 1972. Sawmill demonstrations are periodically given during various days in the spring, summer, and fall for visitors to the site. Bottom: Blacksmith and tool shed. 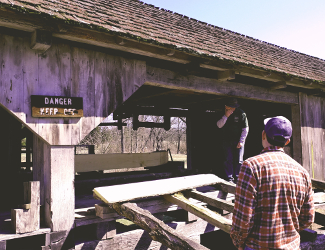 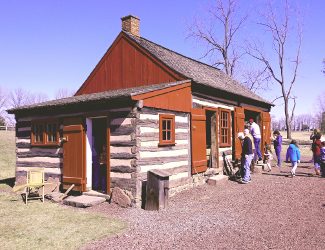 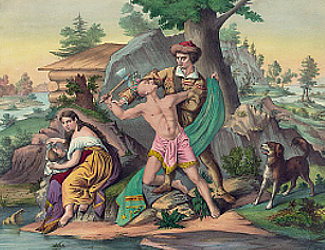 Daniel Boone continued his frontier ways, first in North Carolina, and then Kentucky. He participated in the French and Indian War as a wagoneer under the command of General Edward Braddock, and marched in the same expedition as George Washington in the effort to defeat the French at Fort Duquesne. After that war, Boone engaged in the fur trade to support his growing family, reaching Kentucky in 1767 after the Iroquois ceded that territory to the British, and exploring the area of Cumberland Gap two years later. Six years later he would move his family and fifty other settlers into the area, becoming the first white settlement in Kentucky. Holdouts among the Indian nations still regarding Kentucky hunting grounds as their territory did not go quietly. They killed Boone's eldest son, and continued to claim the territory for two years until treaties with the Shawnee and Cherokee allowed Boone to establish the settlement of Boonesborough.

The start of the American Revolution emboldened the Indian presence in Kentucky, driving all but two hundred colonists from the territory. Boone's family remained. On July 5, 1776, Boone's daughter Jemima (see image below) and two friends were captured by Indians; two days later Boone and friends would rescue them. This incident, fictionalized, would become the basis for the book by James Fenimore Cooper, the Last of the Mohicans. Boone would be captured by the Shawnee, eventually fight in the American Revolution, join the Virginia legislature, become a businessman along the Ohio River, and eventually settled even further west, into today's Missouri. 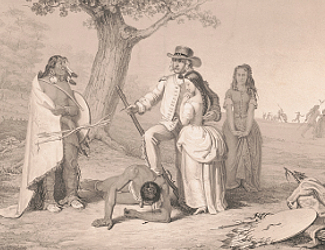 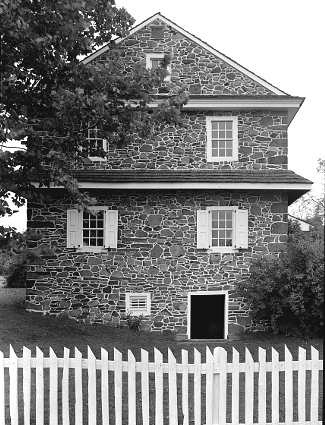 How Did Daniel Become Famous?

Daniel Boone did not become a folk hero in the United States until long after his Pennsylvania upbringing or even his young adult life. His fame came at the age of fifty after books were written about his woodsman and frontier life. The Discovery, Settlement, and Present State of Kentucky, essentially became an autobiography of Boone through various expansions and condensed versions. The books made Daniel Boone famous in both America and Europe. Other subsequent writings continued the tale, including Lord Byron's Don Juan, which included several passages about Boone and his exploits.

Photo above: Boone's expanded home, including the original spring cellar, which was part of the log cabin built by Daniel's father, 1958, Cervin Robinson, Historic American Buildings Survey. Courtesy Library of Congress. Below: Interior of the expanded Boone homestead after his departure during Charter Day 2020. 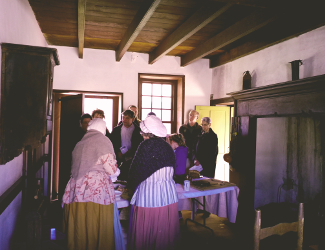 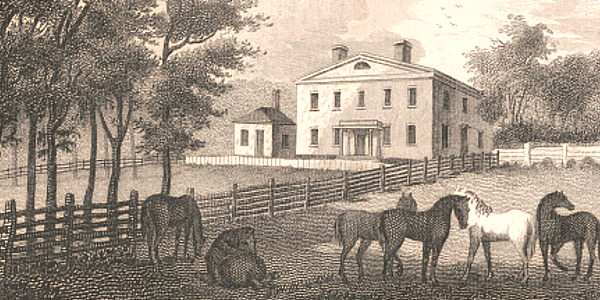 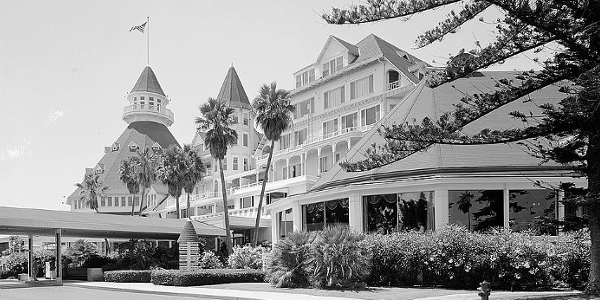 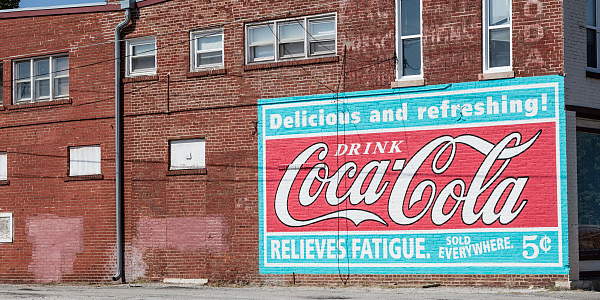