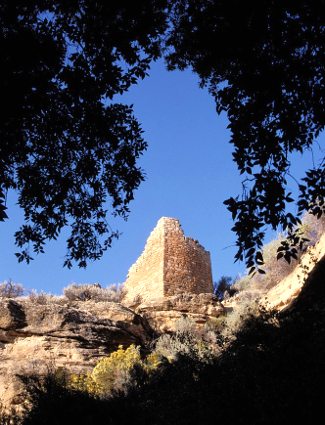 Canyons of the Ancients, Colorado Canyons of the Ancients, Colorado

Anasazi heritage abounds in the region of southwest Colorado and southeast Utah in various national monuments and sites. One such site, often overlooked as a new National Monument, to some oddly placed within the Bureau of Land Management and not the National Park Service, is Canyons of the Ancients National Monument. But not to slight the Park Service, the BLM, or other agencies, the region also holds their jurisdiction as well, in the small, but spectacular ruins and petroglyphs of Hovenweep National Monument, and three Wildlife Study Areas, just north of both and back to BLM oversite. What you will witness here, is thousands of years of culture characterized on its rocks and land, and less visited than should be. For those that get the chance to wander around this part of the country, not far from Mesa Verde National Park, stop by all three areas, no matter who runs them, to wonder at the art, the land, the museums and visitor centers that tell the story. You'll likely be glad you did. Photo above: Grand kiva at Canyons of the Ancients National Monument, 2016, Carol M. Highsmith. Courtesy Library of Congress. 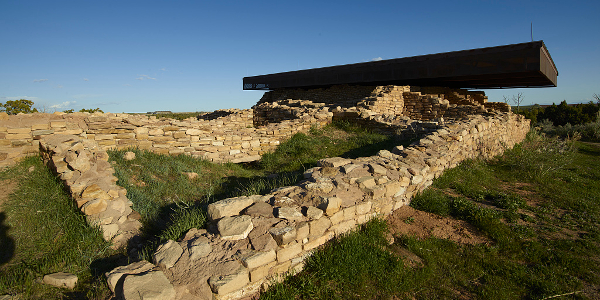 Canyons of the Ancients

Of course, the lands and sites of Canyons of the Ancients has been around a long time before its designation as a National Monument on June 9, 2000, but its relatively new classification, as well as BLM management, has kept it a bit under the radar. However, that's not to diminish its historic resources and nature among the 176,000 or so acres that basically surround its sister park, Hovenweep. The Ancestral Puebloan ruins here are spectacular, dated back to their arrival in the canyons in the 10th Century. There are six thousand structural remnants here (6,355 to be more exact), from Lowry Pueblo, Painted Hand Pueblo, and the remarkable Sand Canyon Pueblo, AD 1250, that had four hundred and twenty rooms, ninety kivas, and fourteen towers.

By the 14th Century, the Puebloan peoples had vacated the area, replaced by the descendents of the Navajo and Ute. Spanish colonists and missionaires would come later, from the 16th to the 18th century, with Anglo American Europeans in the early 19th century.

Today, Canyons of the Ancients, including the Wilderness Study Areas of Cross Canyon, Cahone Canyon, and Squaw/Papoose Canyon, can be visited under Bureau of Land Management supervision. They have a visitor center outside the park to the east, Anasazi Heritage Center and Canyons of the Ancients Visitor Center, that includes a theater, exhibits, interpretive programs, and orientation. Ask at the Visitor Center about other recreation opportunities, including dispersed camping throughout the park, and where that is, or is not, allowed. 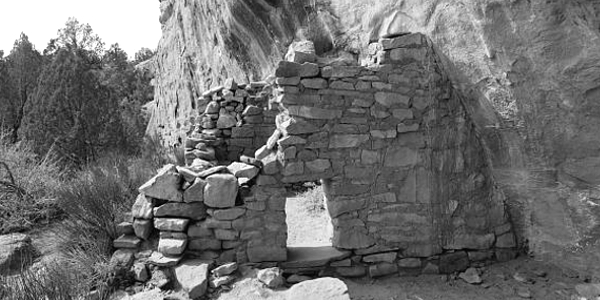 Canyons of the Ancients National Monument has a variety of waypoints, historic sites, and trails within the 176,000 acres of the park. It has a Visitor Center and Museum east of the park in Dolores, Colorado.

Hovenweep National Monument is much smaller, with several units. The main unit, in Utah, includes a Visitor Center and Museum, with orientation and exhibits. It also has trails to its various heritage structures and sites, including the Square Tower Group. A developed campground with thirty-one sites is located near the Visitor Center.

Canyons of the Ancients National Monument. Visitor Center costs $3 adults from March to October. Under 17 and rest of the year free.

There is no charge for Hovenweep National Monument. Both parks are open year round, sunrise to sunset, with the Visitor Center at Hovenweep closed on Tuesdays and Wednesdays in winter.

Well, there's Mesa Verde National Park only twelve miles to the east, as well as Aztec Ruins National Monument not far below that park in northern New Mexico. You're in the Four Corners region here, so National Park units such as Canyon de Chelly, Glen Canyon National Recreation Area, and Natural Bridges National Monument are not too far afield. However, not too far afield, means a bit different mileage out in this part of the country. Check your favorite GPS or travel direction site for details on how far. 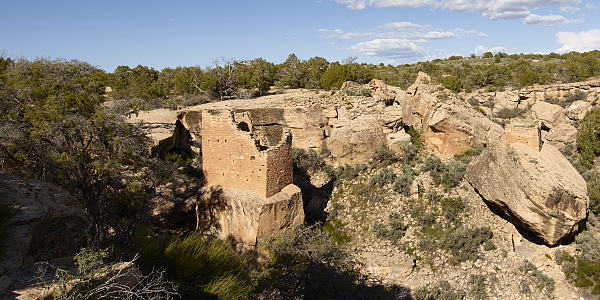 Hovenweep has been a national monument since 1923, and is best known for the ruins of six Puebloan villages. It's small by contrast to Canyons of the Ancients, only seven hundred and eighty-five acres, and is relatively light on visitation, 40,574 in 2018. That should not deter you from visitation, however, as some of the best ruins of the Anasazi are located here. There are those six clusters of buildings. The Colorado portion includes the northern most unit, Cuttthroat Castle with the largest of the remains, plus the Holly Group in Keely Canyon with named buildings Curved Wall House, Great House, Holly Tower, Isolated Boulder House and Tilted Tower. Hackberry and Horseshoe Group are located in Colorado as well, in between the Holly and Cuttthroast sites. In Utah, the Square Tower Group of structures is located near the Visitor Center in Little Ruin Canyon and housed up to five hundred people. South of the main site, Cajon, at the head of Allen Canyon would have included 80-100 residents.

The ruins were discovered by Europeans in 1854, William D. Huntingdon, on a missionary trip for Brigham Young.

Today, there is a Visitor Center in the main Utah unit, and a thirty-one site developed campground at the Square Tower Group site near the Visitor Center. The campground is open year round and does charge a fee. It has seasonal water. 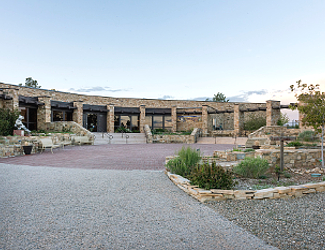 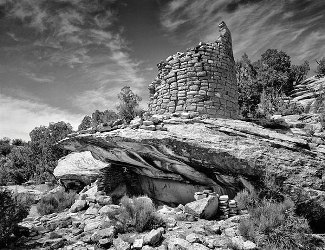 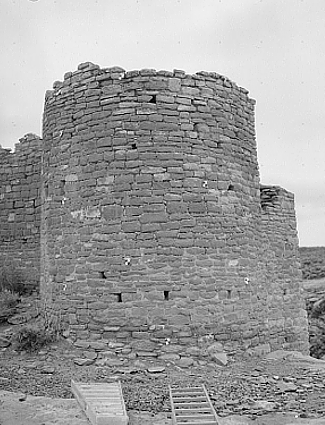 Photos of the Parks 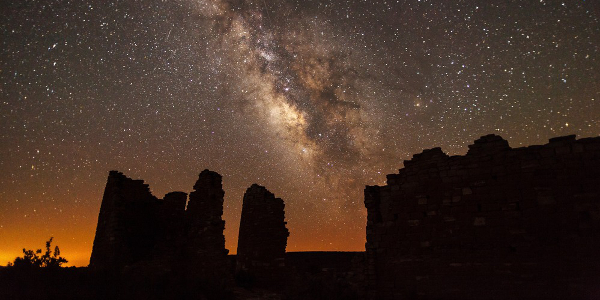 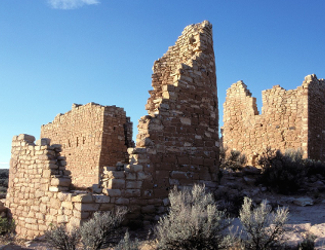