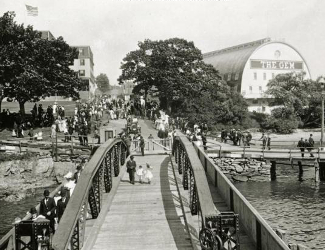 Image above: Peaks Island during the era of the Gem Theater. Courtesy Maine Historical Society. At one time, this island outside Portland, Maine was predominantly known for its actors and actresses plying the board of the McCullum's Theater, the first summer stock theater in the nation. For eight decades, various different structures housed the plays and musicals of vacation bards up from New York City and other environs to get a little Maine summer fun and ply the sets of the theaters. Today, Peaks Island, is still that summer fun place, but there's no theater per se. It's the warm weather vacation spot of New England guardians of that history, in some ways, after a trip on the ferry to get you there. More often it's families in their new or old townhouses that might not even remember the Victorian era theaters and the first ever spot for summer plays in the United States that would spread across a nation. 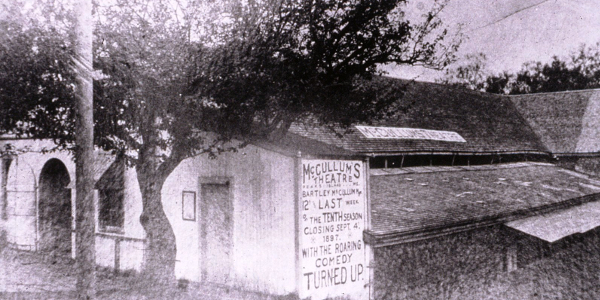 Peaks Island and Its Playhouse

In 1887, Bartley McCullum thought the summer vacation island off the coast of Maine needed an attraction. So he constructed a theater, known as McCullum's Theater. It had five hundred seats. During the first season, he hired local actors to man, and woman, his plays. By the second season, actors and actresses from the halls of New York and Boston were plying the boards. How important was this start and how prevalent did it become? By 1957, there were more than two hundred summer stock theaters in the United States with ninety located in New England alone. By then, it was known as the Citronella Circuit. Yes, because some of them had lots of bugs.

McCullum's Theater lasted as the main theater until 1898, then used for lesser functions until 1921. It was followed by the Greenwood Garden Playhouse, built in 1884 and used as a theater starting in 1891. This structure hosted plays, vaudeville, orchestras, and other events into the middle of the 20th century, summer stock after World War I, and still exists, used for other functions. The Forest City Skating Rink was converted in 1898 into a one thousand five hundred seat theater, known as the Gem. Performances were held there until 1934. Other buildings were used for various theatric purposes, too. Originally known as the Magestic Skating Rink when built in 1903, it hosted events until 1929/1930. Were there famous people associated with Peaks Island and these houses. Absolutely. Think Director John Ford, George M. Cohan, D.W. Griffith, and the Barrymores, for several.

For Peaks Island, the playhouses did not quite make it to 1957, at least in high form, but did flourish for decades after Bart's start. The popularity of the town began to wane in the 1920's when auto touring began. In World War II it was part of the Atlantic defense with large guns pointing from its batteries.

Photo above: The original playhouse, McCullum's Theater, in 1897, during its 10th season. Advertisement announces the last week of the comedy Turned Up, with closing date of October 4, 1897. Source Maine Historical Society. Below: Gem Theater on Peaks Island, 1904, Detroit Publishing Company. Courtesy Library of Congress. 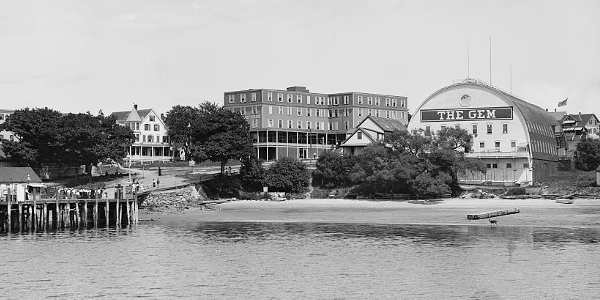 Peaks Island is located less than four miles east of downtown Portland and is reacheable by a seventeen minute, one way, ride on the South Portland - Peaks Island Ferry.

Not much remains from the Victorian days of the resort. Some of the private cottages, as well as the Dance Hall, Bowling Alley, and Shooting Gallery are still there. You can still get the feel of the island by traversing the landscape. Condos for commuters and vacation homes have reduced the charm, but not eliminated it. The ocean views are breathtaking. There are two museums, one on Maine history and the other on umbrellas. Now that's unique. Plus there are charming local places to eat and bike rides to take part in.

How Much to Get to Peaks Island?

The South Portland and Peaks Island Ferry by Casco Bay Lines runs numerous times per day, depending on peak or non-peak seasons, and costs $7.70 roundtrip for adults from mid-April to mid-October. Lower rates for children from 5-13. Free under 5. You can take your car over to the island; rates range from $36 to $82 depending on the season and day of week.

Since you'll be starting in Portland, Maine, for any ferry journey over to Peaks Island, there's a bunch a wonderful sites on the history side of the equation there as well. The Museum at Portland Head Light, Fort Williams Park, plus the Victoria Mansion, Longfellow House, Friends of Fort Gorges, just to name a few. Of course, Maine hosts two wonderful national parks; the iconic Acadia National Park, and the newly minted Katahdin Woods and Waters National Monument. Once there, you can also start your journey south on the Appalachian Trail, too. 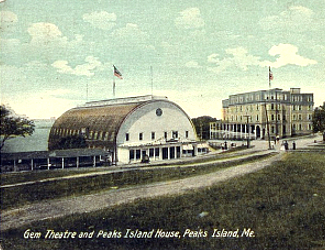 Peaks Island Before the Theater

During the American Revolution, it was thought that only three homes had been erected on Peaks Island. By the 1850's, townsfolk from Portland, Maine would row over to the island to picnic, and steamboat lines had begun irregular service. The Portland area had first been settled in 1623, and permanently settled by Europeans in 1632. By 1850, Portland had over twenty thousand residents who were looking for pleasant places to recreate. Peaks Island was one of them, under four miles east of the city by a crow flight, or as with the first picnickers, a row. By 1880, entrepreneurs capitalized on the opportunity by buiding an amusement park along the shore that would become known as Greenwood Garden. There was a roller rink, at first, and later a Ferris Wheel, midway, and eventually a playhouse. Full-time residents numbered just over three hundred at the end of the 19th century. 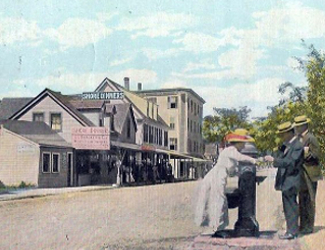 What Else Was There To Do?

For the men, women, boys, and girls of the Victorian Era, Peaks Island was a place, not only to see a play, but wander around Greenwood Gardens, walk a boardwalk, bowl, eat, shoot at a gallery, and spend leisurely moments on the water. It was a small version of what other Atlantic seaboard summer towns would be, such as Atlantic City, New Jersey, and Coney Island, albeit on a smaller scale. In fact, it was referred to by some as the Coney Island of Maine. There were small cottages for visitors, plus hotels such as the Peaks Island House and bed and breakfasts. 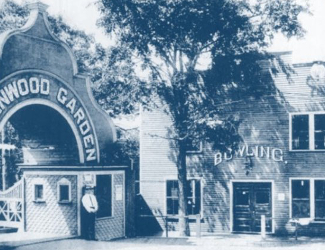 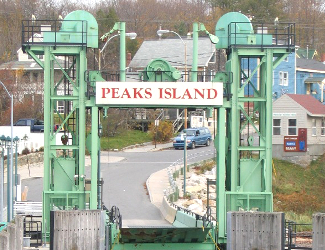 There's no playhouse, but some of the structures from that Victorian heydey remain. There are private cottages from that era, the dance hall, bowling and shooting gallery. The Avenue House, an original hotel, has now been converted into condominiums. For the most part, the island has transformed back to a relaxing vacation spot for Maine families and commuters who like a ferry ride. Development pressure has raised concerns that the lack of documentation about its history will result in increased residential density, which would eventually remove any, or more, remnants of its historic legacy.

If you want to visit, the ferry ride, seventeen minutes, will get you there. Once on the island, a day trip can get you pastry at a local cafe, golf cart (advance registration required) or bike tours of the island, or a visit to two museums, the Fifth Maine Regiment Museum and the Umbrella Museum. Today, a bit over nine hundred residents live there full-time.