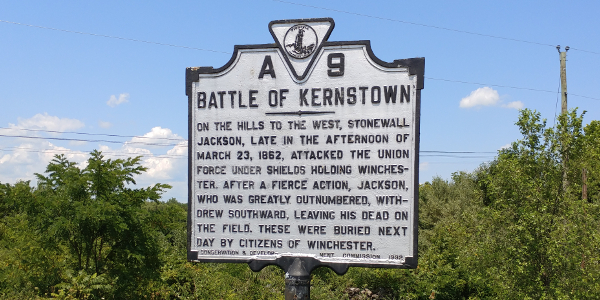 Image above: Interpretive sign about the First Battle of Kernstown near Opequon Church looking toward the Kernstown Battlefield. 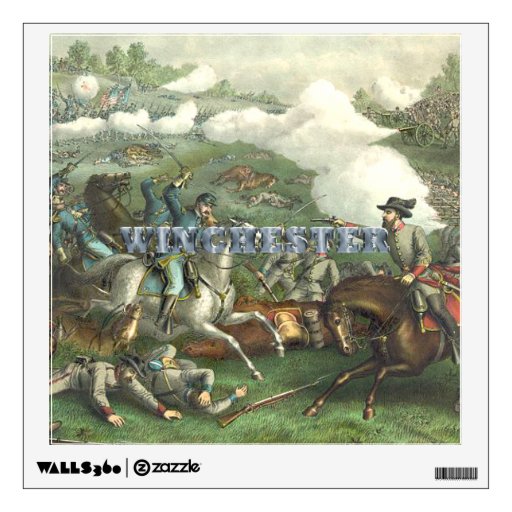 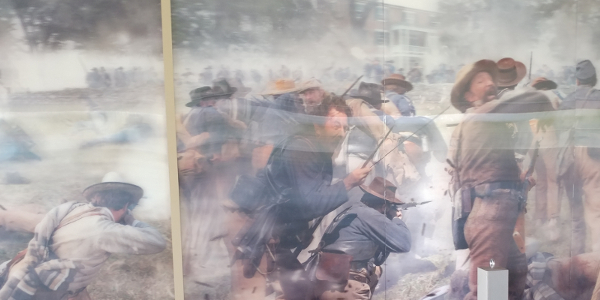 Two battles amidst the seventy-two changes in possession amongst the six or seven major battles within the confines that today we'd call suburbs of Winchester, Virginia. That's what these battles of Kernstown, two years apart, represent. And today, interpreted by a dedicated volunteer staff and saved by the city, state, American Battlefield Trust, and many more individuals who value the land and battle history, the Kernstown Battlefield is a treat to visit for those that love the timeline of history beyond the major events of the Civil War. It may not be Gettysburg or Shiloh or Antietam in scale, but its value settles well beyond the mere mention it may currently get amongst too many. Without Second Kernstown in July of 1864, a determined Sheridan may not have been summoned, the Valley burned, and the siege of Richmond and Petersburg successful. Oh, what the easiest victory for the South might just have done for Union incentive. Photo above: Mural inside the exhibit barn at the Kernstown Battlefield. 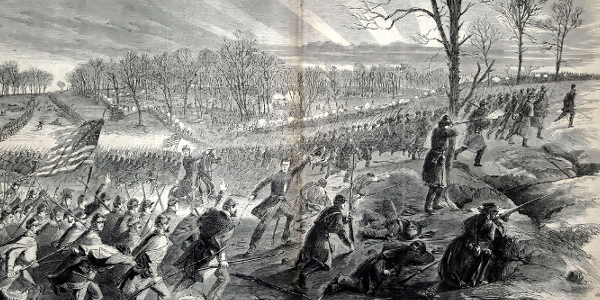 It was 1862 and Stonewall Jackson, fresh off a stellar career in the first year and one half of war that saw no defeats (some historians think that Hoke's Run in 1861 disagrees with that), was now embarking on a new mission to lay claim to the Shenandoah Valley by keeping the Union tied up north while they pursued Richmond during the Peninsula Campaign.

First Kernstown, on March 23, 1862, provided the first test of Jackson's strategy. However, with poor information about the size of the Union force under General Banks, success was going to be difficult. The Union Army that he faced was twice his own. With action to his left by Turner Ashby designed as a feigt, Jackson sent his main division against the Pritchard Hill defenses and artillery, his men guarded behind the stone wall fronting the Pritchard farm lane. Subsequent reinforcements could not overcome the initial thrust when the Stonewall Brigade under Garnett ran out of ammunition.

Photo above: Engraving of Stonewall Jackson and the First Battle of Kernstown, Harper's Weekly. Below: Farm buildings on the Kernstown Battlefield. 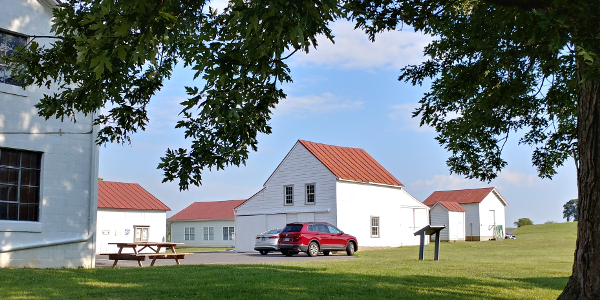 The Kernstown Battlefield is located at 610 Battle Park Drive, Winchester, Va. 22601. It's located off Exit 310 of Interstate 81, several miles south of Winchester proper. Take Route 37 North, then Route 11 North. Battle Park Drive is a little over one mile up Route 11 on your left.

Kernstown Battlefield includes 388 acres of battlefield land from the first and second battles, including the Pritchard House, built in 1854, and yes, therefore part of the battle. There are farm buildings which are used as a Visitor Center and Museum, and an Exhibit Barn with a fantastic mural that should get even more attention, plus cannons. Surprisingly there were not a whole lot of artillery here during the Second Battle.

There's clean bathrooms, a conference room, a picnic table or two, interpretive markers throughout the grounds, historic fencelines and stone walls, the Opequon Church on the Confederate battle line. The church was there in a former incarnation during the battle. There are also guided tours, which if needed also include a golf cart ride, or self-guided tours.

When Open and How Much to Visit

The Kernstown Battlefield is open from May to October on weekends with tours on Saturdays. Check their website for the times plus special events during the year.

Free, but donations are appreciated. The battlefield is run by a non-profit Battlefield Association. You can join the association or donate to them here.

It's a corridor, this Shenandoah Valley, that saw so much history from 1861 to 1865 during the Civil War, but even more from the western days of expansion to lands off the coast and today up and down Interstate 81. You can visit the nature and beauty, or these Civil War landmarks, or both. 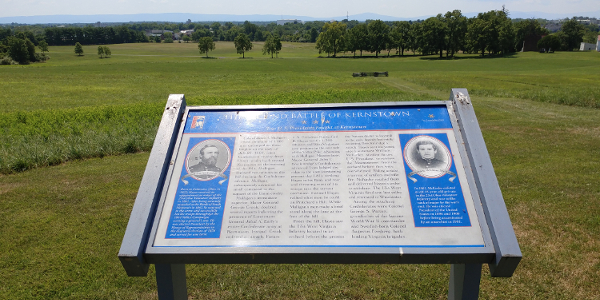 The Second Battle of Kernstown occurred within the Maryland Campaign of Confederate General Jubal Early, who had been sent by Robert E. Lee to threaten Washington, D.C. and take pressure off the Grant sieges of Richmond and Petersburg. Early had been having some success in that effort, although a stalled victory at Monocacy several weeks earlier had cost him victory on the outskirts of Washington at Fort Stevens. His effort continued in a series of smaller battles, including Rutherford's Farm north of Winchester and Cool Springs east along the Shenandoah River. By July 24, 1864, Early's forces, under Ramseur and Gordon, were south of Winchester.

General Crook, in command of the Union Army in occupation of Winchester, had been ignoring reports of troop movements, and even when confronted with additional information from his cavalry about a pending attack, thought the amount of troops were light. But they were just hidden in Barton's Woods. Crook was so convinced that it was just cavalry with a slight amount of infantry opposing him, he retreated from the field and went back to his headquarters in Winchester.

Photo above: Marker about the Second Kernstown Battle from atop Pritchard Hill. 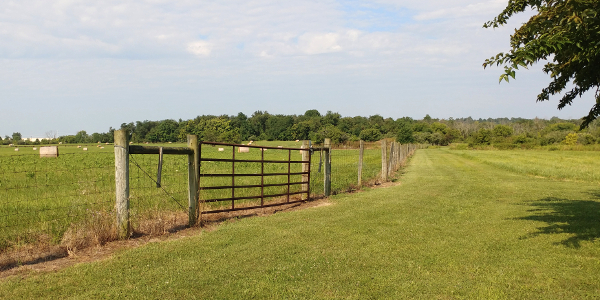 General Crook left the commanders on the field, including an inexperienced Colonel Mulligan, plus upcoming President Rutherford B. Hayes, to abandon their heights on Pritchard Hill and attack in the farm fields below. By the time they realized that the south outmanned them in front and had effectively surrounded them on both sides, they had no other choice but to fight in retreat to the stone wall. Facing three divisions, Colonel Mulligan could not hold the position, and lost his life in the battle. The Union retreated up Pritchard Hill, through Winchester, and into West Virginia, leaving the town to be occupied, once again, by the Confederate Army.

Photo above: The low fields of the Pritchard Farm where Confederate troops attacked the Union after they had abandoned the heights. 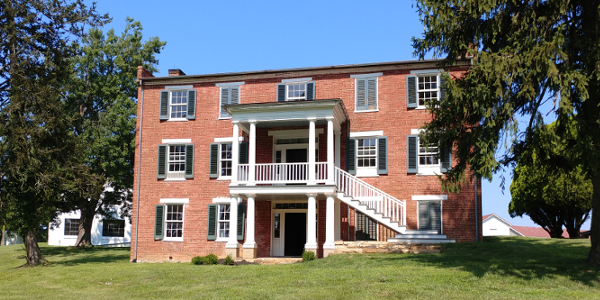 The Pritchard House had been built in 1854 by Samuel Rees Pritchard. By the time of Civil War, the land had been in the Pritchard family since 1756. They were successful farmers, wheelwrights, and shippers, and Samuel had a wife and three children, with no interest in the politics of war. He did not vote in the 1860 Presidential election or the election for the Secessionist Convention.

However, this did not stop war from plying a continuous path across their land. They hudded in the basement during the First Battle of Kernstown and nursed wounded soldiers afterwards. Union artillery remained through 1863, although the Second Battle of Winchester would rage elsewhere. On July 24, 1864, that artillery and thousands of Union troops remained, then climbed down Pritchard Hill behind the farmhouse to defeat with family in the cellar again. Confederates would control the home and town after the 1864 battle until Sheridan's campaign to burn the valley brought General Torbert and his cavalry to their doors to become his headquarters. By the end of the war, the Pritchard's were broke. 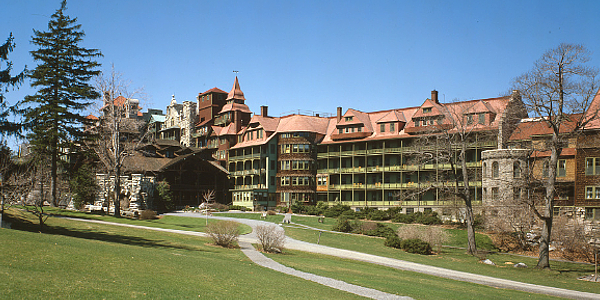 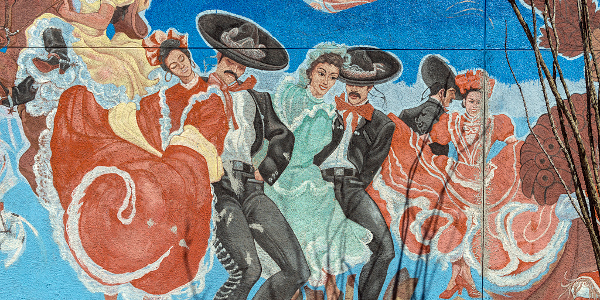 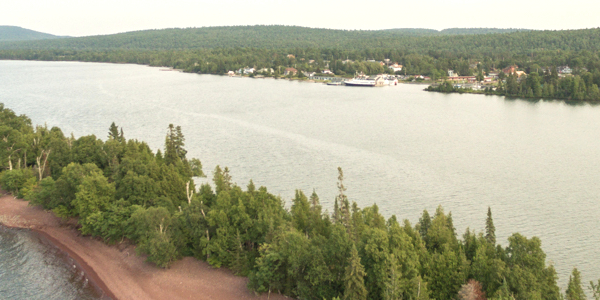